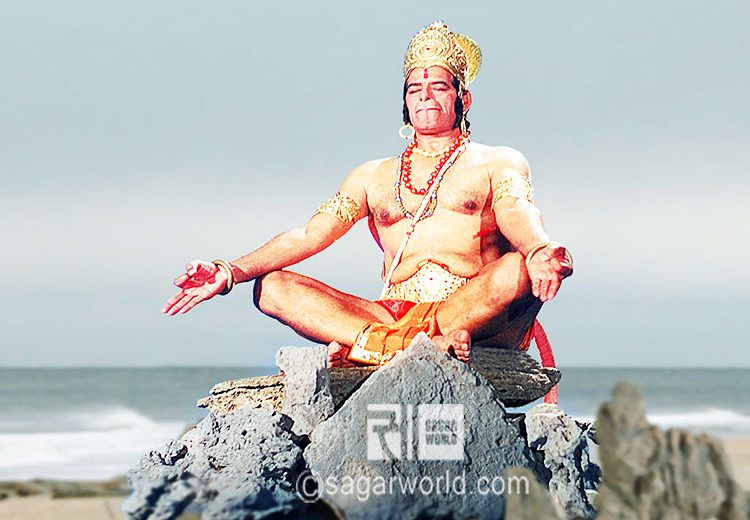 Veer (brave) Hanuman was a minister and friend of Sugreeva. He is the greatest devotee of Shri Ram, ever at his service and very devoted to the Lord. Hanuman’s father was Kesari and his mother Anjana. She was an Apsara (a celestial damsel) called Punjiksthala in her earlier life.

As a result of a curse, she was born as a vanara, in the house of a vanara king called Kunjar. Hanuman is also called pavanputra (son of the wind god). Vanarraj (king of the monkey’s) Kesari once undertook a severe penance and at the end, Brahma asked him for a boon.

Kesari said, “I want a son as strong and powerful as the wind God, Vayu.” Brahma granted his wish. When the young Anjana was going for a stroll on the mountainside, in a human form. Vayu devta (wind god) saw her and playfully blew off her silken sari (a type of Indian dress) and embraced her. Anjana was very angry.

She said, “Who is this? Who wants to rob me of my modesty?” Vayu said, “Oh Anjana, the pure hearted, I am here to do as the Gods bid and with my mental power I have caused your womb to bear a baby. You are as innocent and pure as ever.” Anjana narrated this to her husband. Kesari said, “Anjana, your son will grow up to be valiant and invincible. This is a boon from Brahma.” After nine months, Anjana gave birth to a boy.

When he was but a baby, Hanuman saw the rising sun. He thought that the orange red ball was a ripe fruit and he jumped up to pluck it and eat it. In a moment, he swallowed up the sun.There was chaos everywhere and the entire creation was in an unstable state. The enraged Indra (King of the Devas) threw his thunderbolt at Hanuman. The child fell in a swoon on the ground. Now when Vayu saw this he decided to hold back all winds.

The entire world was at standstill. Brahma and the Gods, along with Indra, came and greeted Hanuman and blessed him that his body would be as strong as a thunderbolt and that he would always be unconquerable. Hanuman had been injured on his chin. A small chibuk (scar) is called Hanu hence his name became Hanuman. Surya (Sun God) gave him the knowledge of the Vedas.

As a child he was very mischievous and would playfully throw away the prayer vessels of the sages of the forest, thus disturbing their religions rites. They cursed him to forget how powerful and energetic he was. “You will have no recall of your prowess and ability. Only when another person reminds you of it, you will be aware of your endless power and immeasurable energy.”

Due to his virtues and intellectual ability, Hanuman became a minister in Sugreeva’s court and his good friend and companion. Bali was Sugreeva’s elder brother who became his foe and was eager to kill him. To escape the wrath of Bali, Sugreeva ran around everywhere in the world but Bali chased him wherever he went.

Then Hanuman suggested that Sugreeva should go to Rishyamukha Mountain, which was out of bounds for Bali because of a curse on him put by Sage Matanga. So Sugreeva set up his residence at Rishyamukh Mountain. Ram arrived there in search of Sita who had been taken away by Ravan; he was wandering through the forests with his brother Lakshman, to find out where Sita had gone.

Hanuman recognized them and introduced them to Sugreeva who befriended them. Sugreeva was missing his wife Roma who had been taken away by Bali by force. Ram killed Bali and made Sugreeva the King of Kishkindha, the capital of the Vanara kingdom and Roma was returned to him. Sugreeva promised to help Ram in his search for Sita and sent his monkey spies to search in all directions.

The responsibility of the search in the South was with Angad, Hanuman & Jambvant. Acknowledging the abilities of Hanuman, Shri Ram gave him his ring which had his name etched on it, so that whenever he found Sita, he could prove to her that he was an envoy of Ram.

Yogini Satyavati and Sampati, Jatayu’s brother whom they met by the seashore, gave them the information that Sita was in Lanka, under Ravan’s captive care. Now all of them began to ponder how they would cross the ocean to Lanka. It was then that Jambavat reminded the silent Hanuman about his immeasurable power, which he had forgotten about. “Oh! Brave Hanuman, recall your celestial power bestowed on you.”Hanuman then remembered all the powers he had been blessed with and with a leap reached the shores of Lanka across the sea.

He saw Sita in the Ashokvatika and in the silence of the night, dropped Ram’s ring near her, while hiding in a tree overhead. He then began to narrate the story of Ram.

Sita heard him and asked him to come before her. He did so and introduced himself as an envoy of Ram. With Sita’s permission he destroyed the Ashokvatika and killed the guards.

When Ravan’s son, Akshaykumar came to catch him, he killed him too. Then Ravan sent Indrajeet to catch Hanuman, with explicit instructions, “Don’t kill him, just catch him so that I can find out whose spy he is.”Meghnad caught Hanuman with his Brahmapash (Brahma’s) weapon. With respect to Brahma, Hanuman allowed himself to be caught, for he had a task of Ram to fulfill. Vibheeshana explained to Ravan, that he is just an envoy, a messenger. So don’t kill him, just break a limb and send him back.  A monkey’s affection lies in their tail so tie a cloth around his tail and set it on fire. Hanuman was happy with this suggestion.

His tail was tied with strips of cloth dipped in oil and set on fire. Hanuman made his tail longer and longer and with the burning long tail, jumped up to the ramparts of Ravan’s palace and set the whole of Lanka on fire to give Ravan a sample of his strength.Sitaji bestowed on him, Ashta Siddhi (Eight spiritual powers) and Nav Niddhi (nine spiritual powers). Hanuman took Sita’s message and told it to Ram on his return from Lanka.

Ram decided at once to set out with his army for Lanka. With the help of the Vanara army, a bridge was made to span the ocean and they crossed over to Lanka, Vibheeshan came away from Ravan’s court to join Ram’s army. The battle between Ram and Ravan began. After a fierce fighting scene, Lakshman fell into a faint because of the weapon used by Meghnad. The vaid (physician), Sushena recommended the Sanjeevani herb that grew only on Himalayan Mountain, could alone save Lakshmana’s life.

Hanuman flew across the skies to reach the mountain but he could not recognize which plant was Sanjeevani. So he picked up the entire mountain and brought it to Lanka. As soon as the Vaid (physician) Sushena used the herb on Lakshman, he woke up from his fainting spell and sat up.

Next day, Meghnad was killed by Lakshman in the battlefield. Kumbhakarna was also killed.Then Ravan sent for Ahiravana, his son and the King of Patallok. Ahiravana came to Lanka and at night got into the camp of Ram’s army by taking the form of Vibheeshana.

He carried away Ram and Lakshman to sacrifice them as an offering to the Goddess. When Hanuman realized that the kidnapping of Ram Lakshman was done by Ahiravana, he at once reached the underground kingdom. He took the guise of the Devi (goddess) and killed Ahiravana and all his rakshasa soldiers.

Seating Ram Lakshman on his shoulders, Hanuman came back to Lanka to continue the battle. In the end, Ram killed Ravan. Vibheeshan was crowned king of Lanka. Riding on the Pushpak Viman, Ram, Sita and Lakshman returned to Ayodhya. Ram introduced Bharat to Hanuman and said, “Bharat, Hanuman is as dear to me as you are.”

Sugreeva, Angad and other Vanaras were rewarded by Ram and they went back home. However Hanuman was committed to serve Ram, so he stayed by his side. When his avatar (incarnation) on earth came to an end, Ram bestowed immortality on Hanuman to live forever on earth and look after the devotees of Ram.

As soon as a devotee remembers Rambhakt Hanuman, he assumes a minute from and reaches there to help them. According to Shiva Purana, Hanuman is an incarnation of Lord Shiva.

What better evidence can there be for the devotion of RamBhakt Hanuman, that today there are far more temples dedicated to Hanuman than to Ram in our country! Hanuman Chalisa (prayer to Hanuman) is read by many people daily in India. Hanuman is worshipped on Tuesdays (this day is connected with the planet Mangal (Mars) and Hanuman is associated with strength and force which are also characteristics of Mars) and Saturdays (because he is the only one who could defeat Planet Shani (Saturn) and so worshipping him on Saturdays removes the malefic of Saturn from the horoscope). Hanuman is still believed to be living the Himalayan ranges and is immersed in the devotion to his dear Ram. The ultimate image that portrays the devotion of Hanuman towards Ram is when he tore open his heart with his claws and the image of Ram and Sita was seen in it.