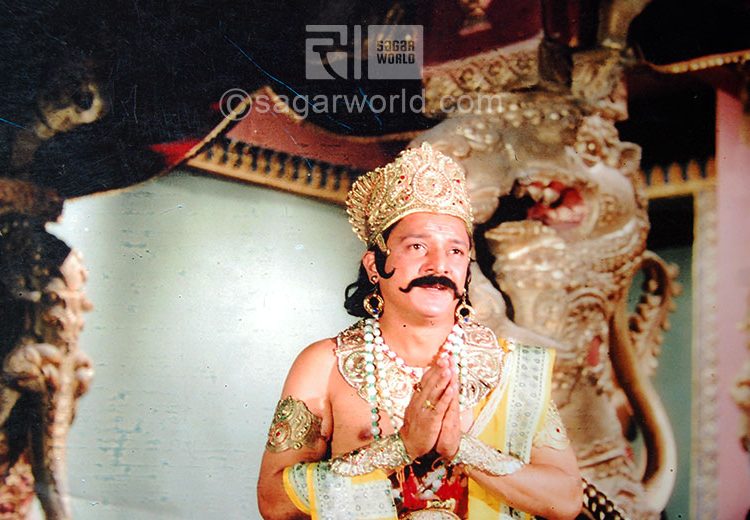 Vibheeshan was the third brother of Ravan, the King of Lanka. He was extremely devout and religious by temperament.

When Sage Vaishrava was engaged in his evening prayers, Kekasi sought him to oblige her for the purpose of begetting a son. Sage Vishrava said, “Kekasi, you have compelled me to cohabit with you at the holy hour of evening prayers. So the sons born to you now will be very cruel and treacherous.”

Penitent, Kekasi humbly requested his forgiveness and begged, “Please give me one son who is as religiousand pious as you.” Vaishrava said, “So be it!”As declared by Vishrava, Ravan and Kumbhakarna born to Kekasi, were very cruel and fearsome. But the third son Vibheeshan was good, noble and religious.Along with his brothers Ravan and Kumbakarna, Vibheeshan too undertook severe penance at Gokarna, praying and concentrating on Lord Brahma.

When Brahma offered Vibheeshan a boon, he requested endless devotion to God and a chance to have his darshan (vision). The noble-hearted Vibheeshan was truthful and just. Hence, Ravan made him one of his ministers. Impressed by his impeccable character, a Gandharva (celestial being) named Shailesh offered his daughter Sarma in marriage to him. She too was good, noble, and spiritually inclined.

When Ravan brought Sita by force to Lanka and tried to threaten her to marry him, Sarma, as asked by her husband Vibheeshan, would often console her. When Hanuman arrived at Lanka in search of Sita, he saw one house where theTulsi – holy basil, was planted in the courtyard and symbols of Vaishnavism (worship of Lord Vishnu) on the walls. Hanuman was happy to find a Ram devotee, introduced himself to Vibheeshan that very night and told him the purpose of his arrival. Vibheeshan told Hanuman that Sita was in the Ashokvatika (grove of Ashoka trees).

Hanuman destroyed the trees in the Ashokvatika and killed Akshaykumar. Then Meghnad caught him and brought him before Ravan inthe court. All Ravan’s ministers were in favor of Hanuman being killed, except for Vibheeshan, who said “It is not ethical to harm an envoy. If you feel he has done harm, you may break a limb or two.” It was then that Hanuman’s tail was wrapped and tied with oiled cloth and set on fire.

Hanuman then broke free, leaped out of the palace and set all of Lanka on fire with his burning tail. When Ram and Lakshman came with the Vanarsena to attack Lanka, Vibheeshan tried to persuade Ravan that Shri Ram was not an ordinary mortal. Nor was his army made up of ordinary monkeys. It would be best for him to return Sita to Ram and make peace with him by declaring a truce.

In response, Ravan kicked Vibheeshan and said, “Go away! Go and join the one whose praises you sing so much!” Vibheeshan did exactly that and went to join forces with Ram. Ram declared him the king of Lanka and appointed him his minister.

On the advice from Vibheeshan, Ram asked Nal and Neel to build a bridge across the ocean. When Lakshman was revived by the Sanjeevani herb, Meghnad went to the Devi (goddess) temple to perform the Aneya Yagna. On being advised by Vibheeshan, Angad, Hanuman and other Vanara braves disturbed him and ruined the proceedings. Meghnad was later killed by Lakshman.

When in the night, Ram and Lakshman were asleep in the camp in the battlefield. when AhiRavan, the King of Patala, arrived there in the guise of Vibheeshan and by hoodwinking Hanuman, carried away Ram and Lakshman to his underground kingdom. In the morning, when Sugreeva, Jambavat etc. found Ram Lakshman missing from their midst and created a commotion. Vibheeshan clarified that it must have been AhiRavan who took his form, as only he was able to do so.

On Vibheeshana’s suggestion, Hanuman went to Patallok in search of Ram and Lakshman. AhiRavan was preparing to sacrifice Ram and Lakshman to the Goddess. Hanuman stepped in and sacrificed AhiRavan instead. Killing all the other rakshasa’s in Patallok, Hanuman carried Ram and Lakshman on his enormous shoulders, returning to the battlefield.

After Kumbhakarna and Meghnad were killed, Ravan joined the battle. There was a massive battle between the leaders of the two armies. Ram would chop off the heads and arms of Ravan, but they would grow back at once. It was Vibheeshan who told Ram that Ravan, blessed by Shiva; was carrying the nectar of immortality in his navel.

Unless that nectar is dried out, Ravan could not be killed. Ram then used, an agniband (arrow of fire) to absorb and evaporate all the amrita (nectar of immortality) stored in Ravan’s navel. Ravan was thus able to be killed. After the death of Ravan, as promised, Rama made Vibheeshan the King of Lanka.

Vibheeshan handed Sita over to Ram and also gave him the Pushpak Viman (aerial chariot) to hasten his journey back to Ayodhya. When Ram finished his human role on earth, he blessed Hanuman with immortality.He also blessed Vibheeshan to live forever. Immersed in his devotion for Ram, Vibheeshan became immortal. He played a very important role in the Ramayana by helping Ram in moments of peril.