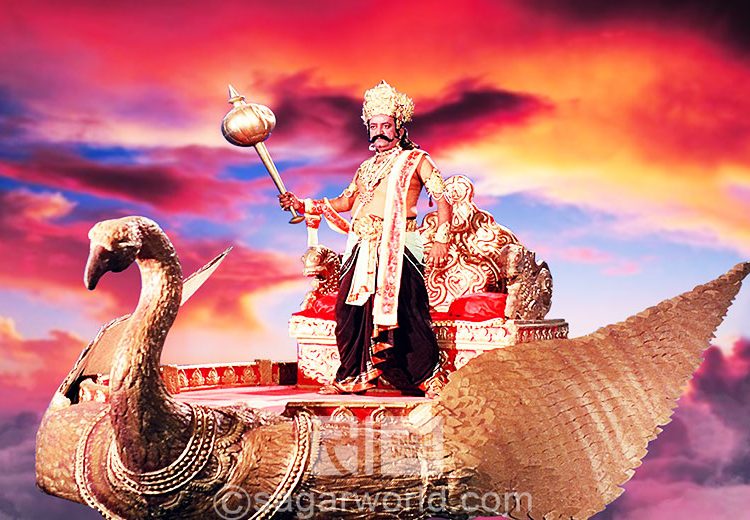 the south coast of India, out to sea, lies a beautiful island called Lanka, of which Ravan was the King. At that time the entire Kingdom of Lanka was made of gold. Ravan’s father was Vaishrava, who was the son of sage Pulatsaya. His mother was Kaikesi. From the first wife of Vaishrava, Kuber was born, who became the Dhanpati, treasurer of the Gods. Earlier on, he was the King of Lanka, but Ravan took golden Lanka from him by force and sat on the throne as king.

Filled with desire, Kaikesi once propositioned Sage Vaishrava during the time of evening prayers and lay with him at that auspicious time. Sage Vaishrava said, “You have forced me to co-habit with you at the Sandhya Kaal (evening prayer time) so the sons you will bear will be cruel and mean.” Kaikesi begged him for a least one son who would be pious and spiritual. Vaishrava said, “So be it! One of your sons will be a devotee of God.” Hence Ravan, Kumbhkarna and Vibheeshan were born, of whom Vibheeshan was a devout soul.

Once he overpowered Indra in a fight and tied him up. Since then he was also called Indrajeet. Ravan had ten heads and twenty hands, which he acquired after praying to Lord Shiva. When Ravan walked, the entire earth trembled with the impact of his feet.

The son of a sage, Ravan was well versed in the scriptures, and had learned the Veda and Vedanga. It was as a result of the curse of an earlier life that he had become a terror. There were two gatekeepers, Jaya and Vijaya, at the main gate of Vaikunth (the abode of Vishnu). When the sons of Brahma, Sanaka, Sanandan, Sanatana and Sanakadi went to Vaikunth for a darshan (sighting) of Vishnu.

But when they tried to go in, Jay and Vijay blocked their way and insulted them. The four of them laid a curse on Jay-Vijay for their rudeness. As a result of the curse, the two of them were born as the demons Hiranyaksha and Hiranyakishpu. In the next life, during Tretayuga (one of the four periods the earth goes through each extending for millions of years before creation is destroyed by the great  Pralaya (deluge) and started all over again), they were born as Ravan and Kumbhkarna.

Ravan was very ambitious. He along with his brothers undertook a severe penance to propitiate Brahma who granted a boon to him so Ravan said, “There should be no one in the three worlds stronger than me, and I should not be killed by any deva, Danava, Gandharva, Yaksha. I have no fear of humans or monkeys for they are our food.”

Brahma granted his wish that he could not be killed by any being except humans. Brahma’s boon made Ravan very vain and fearless and he began to create havoc in all three worlds. He defeated all the Gods, including Indra. He even subjugated Yama (the God of Death) and made him his slave. The Gods began to flee from heaven and hide in hills and mountains.

The Yagna (fire-sacrifice) and the religious rites performed by sages and Rishi’s on earth provide nourishment to the Gods. When Ravan realised this, he began to banish all such Yagna (sacrifices). The hordes of rakshasa’s began to harass and torment sages and ascetics, hurting them and even killing them.

Piles of bones and skeletons of sages devoured by rakshasa’s began to collect in forests where sages earlier dwelt in peace and calm. The earth was heavy with the weight of sinners. The gods led by Indra along with Prithvi, the personification of earth, went to Brahma for help who took them all to Shiva.

Ayodhya’s King Dashrath had been blessed in an earlier life that God would be born to him as his son. Hence God in the form of Shri Ram was born to Dashrath and Kaushalya, while Bharat, Shatrughna and Lakshman were partial Divine incarnations.

In the end, Ram killed Ravan in battle. Ram then crowned Vibheeshan as the king of Lanka. After the death of Ravan, the Devas became fearless again and the people on earth were at peace too. And why not? God in the form of Shri Ram ruled on earth.

Though Ravan was the main “bad” character in the story around which the whole Ramayan is centered, it must be remembered that the great powers of Ravan, which he attained through severe penance, were what forced God himself to incarnate on the planet earth to annihilate him.

Thus Ravan was by no means a merely evil character. He was a vastly-learned Pundit (holy man), a great musician, a noted scholar, and a devotee of Lord Shiva, but one who became arrogant afterwards and believed that no one was greater than him. That was when God had to descend to the earth to teach him a lesson.  Ultimately Ravan attained salvation because he was slain by God himself.

Rahu - the demon who became a celestial divine