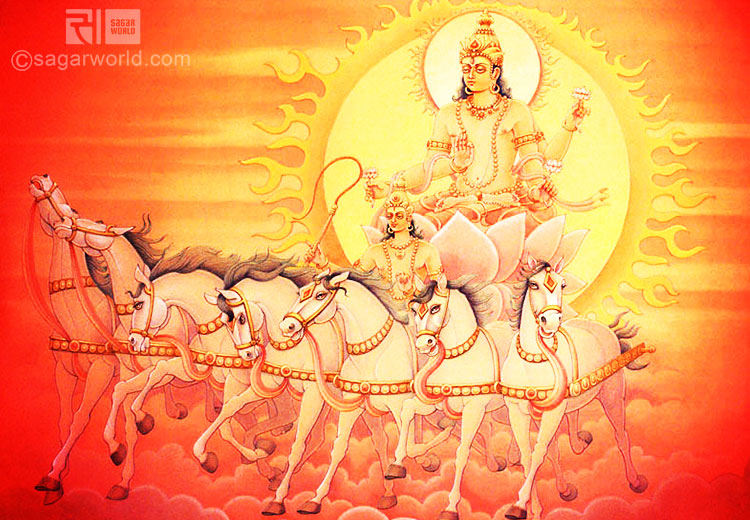 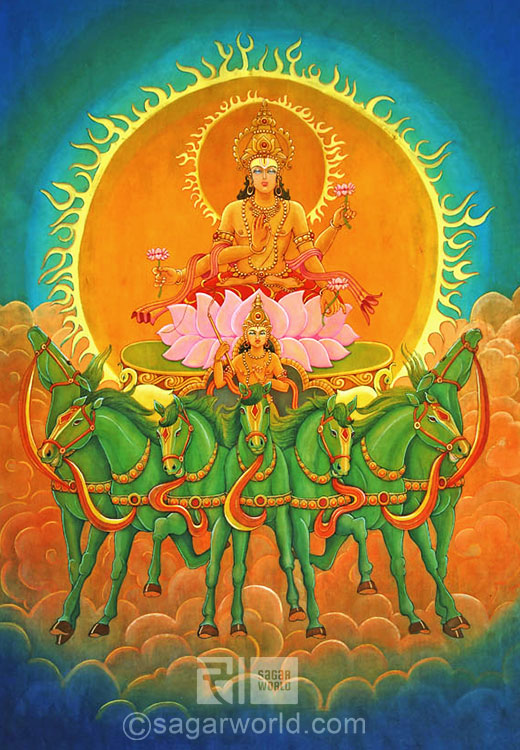 The Sun is the brightest star of the Galaxy. The Sun is superior among all the planets and he becomes pleased with whoever reveres him consistently. Among the planets he is God incarnate in solar form.

Those who regularly and devotedly remember the Sun lose all their worries, disease and poverty, for unwavering worship of the Sun destroys all obstructions and fulfills all cherished desires.

The Sun has sparse, curly hair, an incisive mind, a prominent appearance, a majestic voice and is not very tall. His eyes are honey-coloured and as bright as wine and his bones are sturdy. He has a Pitta constitution.

He is courageous and steady; his complexion is coppery reddish or golden and his feet are inconspicuous. He wears red flowers and saffron coloured clothes and carries a red lotus in his hand. His metal is gold or copper and his gem, ruby. In the body he rules the bones.

Everything originates from the Sun, for he is the soul of all. He is the King of the sky, the ruler of all that falls between the earth and the celestial regions.

Lord of the east, the Sun rules both Sunday and the constellation Leo. He is the Cause of the Day, the Terrific Fiery- Rayed One, and the Significator of World Bliss.

He is called the Shiner, the Enlivener, the Generator, the Life-Giver, the Light-Maker, the Day- Causer, and He Whose Rays Are Piercingly Hot. There is no reckoning of time without the Sun and without time there can be no poetic meters, no seasons, and no rhythm in the world.

Surya is the son of Rishi Kashyap and Aditi. He is also called Vivasvan (the shining one). Vivasvan had by his wife Sangya three children: a Progenitor (Manu) called Vaivasvata and the twins Yama and Yami. Sangya, the wife of Vivasvan, was the daughter of Tvashtri, the celestial architect who is also known as Vishwakarma (Master builder of the Cosmos). When her mate’s intense heat became unbearable for her, Sangya created a substitute wife, in her exact form, by awakening her own shadow (Chaya).

She then proceeded to her father’s house, where she complained to Tvashtri that life with the Sun was impossible due to his scorching rays. When Tvashtri dutifully advised her to return to her husband she chose instead to become a mare on Earth and in that equine form began to perform severe penance, subsisting on dry grass alone, that she might come to withstand her husband’s effulgence. 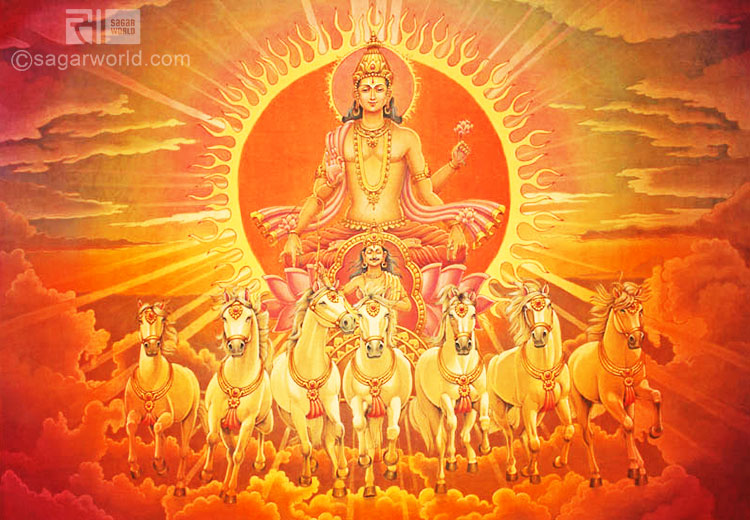 In the meanwhile, Chaya who was Sangya’s shadow brought to life, bore Surya three children : first Savarni, then Saturn, then Tapti. Once Yama getting fed up with Chaya’s partiality towards her own children raised his leg to kick Chaya. Chaya lost her temper and cursed the boy that his legs would fall from his body.

When Vivasvan (Surya) came to know about the curse he began to suspect that the woman he had been living with was not his wife Sangya because which mother would curse her own child? On sternly asking Chaya, she told him every thing and he divorced her on the spot.

Enraged Vivasvan went to Tvashtri who pacified him, explained Sangya’s plight and suggested a way out. Tvashtri strapped the Sun to his milling machine and ground away part of his intensity. From the portion of the Sun’s splendor that Tvashtri removed that smith forged the discus of Vishnu the Preserver, the Trident of Shiva the Destroyer, the aerial car used by Kuber, the god of wealth, and the spear wielded by Kartikeya, the generalissimo of the gods.

Vivasvan went looking for Sangya. When he found her on Earth in mare’s form he took the form of a stallion. Later, the Ashvin twins whom the Vedas hail as the Never Untrue were born to Sangya and Surya. 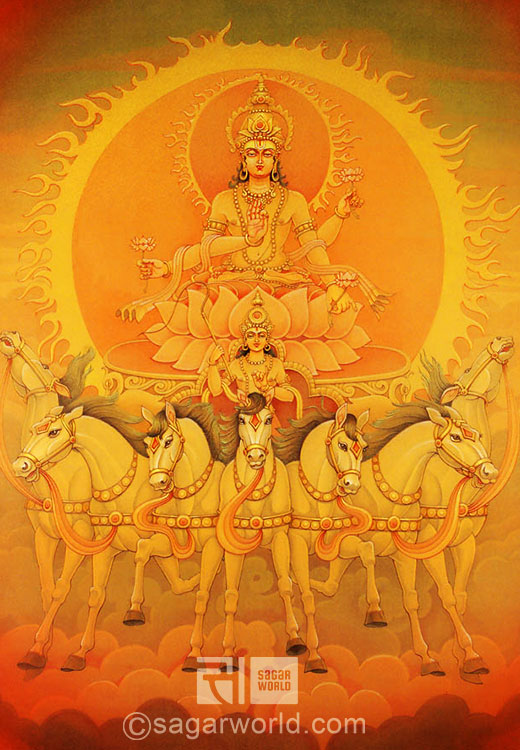 The great warrior Karna, who was the offspring of Lord Sun and the human maiden Kunti, was born wearing a pair of earrings and a bright breastplate.

These, which were part of the flesh of his body made him impervious to all weapons. Hanuman, (the monkey-god who helped Lord Ram in His fight against Ravan the Howler) learnt the Vedas and their subsidiary lures from the Sun.

Affliction to the Sun in the horoscope can lead to many sorts of maladies, especially skin ailments like ‘ white leprosy’ (vitiligo), while worship of Lord Sun helps to cure all diseases and makes the skin shine with the brilliance of the Sun. Shri Krishna’s son Samba was cured of vitiligo on following the Sunday vow and worshipping the Sun.

It is therefore meet to perform the regular, disciplined worship of the omnipotent Lord Surya Narayan. By doing Sun Salutations yogis gain health, strength and awareness. Those who regularly repeat the sacred Aditya Hridaya hymn conquer all their foes as surely as Lord Ram slew Ravan in battle.

Lord Sun’s light and eminence are so great that whoever meditates on Surya Narayan as the soul and the presiding deity of sight of all beings, the one who washes away sins, loses both blindness and ignorance.