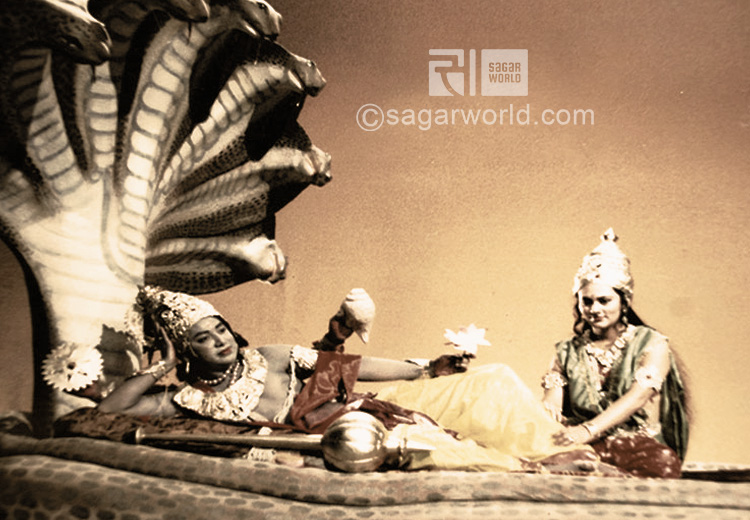 The terror and torment during the rule of the demon King Ravan had burdened Mother Earth (“Dharti Mata”) with an immense load of sins. The anguished and troubled mother earth appealed to Indra, the King of Heaven, to help her, who in turn appealed to  Lord Brahma, the creator of the universe. Then Brahma gathered all the Gods together with Mother Earth and took them to Lord Shiva (the destroyer amongst the Hindu Trinity), and then all of them together went to “Vishnudham” or “Vaikuntha”, where Lord Vishnu (the god responsible for preservation of the universe) was reclining on his Sheshshaiyya (Anantnag or Sheeshnag coiled up as a seating) in the Ksheersagar (ocean of milk). Goddess Lakshmi (the goddess of wealth and prosperity) was seated there at his feet, gently massaging them. This was the divine play or “Leela” of the gods in order to facilitate the birth of Rama.

The Gods then appealed to Vishnu to help “Dharti Mata” rid herself of the trouble and turmoil the demons were causing. Lord Vishnu promised to appear in the near future on earth in a human form, as an avatar (descent of the Divine spirit into a human body) for a special purpose.

Meanwhile, King Dashrath of Ayodhya had reached his middle age, but had not yet fathered any sons to continue his kingly lineage. He appealed to his Guru, the great Sage Vashishth, to help resolve his problem. Sage Vashishth in turn called on Shringi Rishi to perform the “Putreshti Yagna” (fire sacrifice for the purpose of obtaining sons) for King Dashrath, who made all arrangements for the Yagna.

At the end of the ritual, Agni, the Lord of the Fire element, appeared with a bowl of kheer (rice pudding). Dashrath gave the “kheer” to his three queens, Kaushalya, Sumitra and Kaikeyi. At the end of nine months, Ram was born to Kaushalya, Bharata to Kaikeyi, and Lakshmana and Shatrughna to Sumitra.

It was the day of the full moon. Kausalya was feeding her son, Ram, showing him the full moon in the sky. The little child was captivated by the bright moon in the sky. “Give it to me,” he said pointing to the moon up in the sky. Kausalya laughed at the innocence of her child. Then she had an idea. She ran to her room and returned with a bowl of still water. She showed it to baby Ram. The child looked at the reflection of the moon inn the still water. “I got the moon,” he jumped in joy.

King Dashratha was immersed in the love of his four sons, and soon under his loving gaze the boys grew into young teenagers, on the threshold of manhood. King Dashrath called Sage Vashishtha to perform their sacred thread ceremony, the “Yagnopavita Samskara” (one of the 16 samsara’s that a Hindu must perform during their lifetime). Then, afterwards, they were sent away from home in the company of their guru, to live at his “Gurukul” for their education. The three mothers were extremely upset at their departure, but then, this was a necessary rite of passage, to mould them in harsher conditions than those that prevailed in the palace.

In the Gurukul, along with his three brothers, Ram learnt about Religion, Duty, Polity and Archery. In the Gurukul system of learning it did not matter if you were the son of a King or an ordinary man, everyone stayed together with the same privileges. Every day he worshiped Lord Shiva. In a few years he became well versed in the scriptures, including the Vedas, and other subjects taught at the Gurukul.