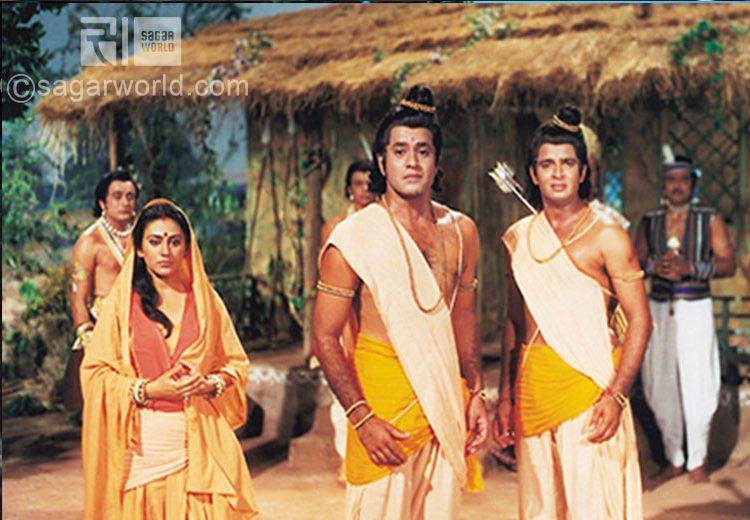 Ram, Lakshman and Sita were seated outside their hut. They saw a deer and other jungle animals scurrying away and a cloud of dust on the jungle road indicating that a group was approaching. Just then a forest dweller told them the news that Bharat was arriving there along with an army, and courtiers and would soon reach Chitrakoot.

Lakshman was upset to hear this. He said, “Look at him; like mother, like son! This Bharat thinks Ram is alone and unprotected in the forest. He has evil intentions; that is why he is coming with soldiers, but as long as Lakshman is alive, none of his plans will succeed!” Ram then assured Lakshman that even in his dreams, Bharat would never falter from his high ideals and spotless character. “You should not get so agitated without any real cause!” he told Lakshman.

Eager to meet with Ram, Bharat walked ahead of the others. As soon as he saw Ram, he greeted Ram with a respectful “dandavatpranam” (Full body prostration including head, flat on the ground). His eyes were streaming with tears. Ram ran to lift Bharat up in a warm embrace. After all the four brothers had greeted each other, as well as Nishadraj, Bharat told Ram about Dasharath’s passing away.

Ram and Lakshman were saddened to hear the news. After meeting the queens and guru, Ram went to the river to pay final respects to his father with a jalanjali (offering of water). The next day all the courtiers sat together and Ram asked Bharat the purpose of his visit. Bharat told him that he wanted to organize Ram’s coronation at once in the jungle and take him back to rule over Ayodhya. Ram did not accept his suggestion. The next day king Janak arrived there with his court and countrymen.

He also supported the suggestion of Bharat.

Ram said, “Neither I nor Bharat are interested in the throne but we are both bound to obey the promise given by our father.” Disappointed, Bharat prepared to leave. To follow Ram’s ideal, he asked him for his sandals. Holding the charan paduka (sandals) on his head, he returned to Ayodhya after making Ram promise he would return on the very day the fourteen-year period of exile was over.

On reaching Ayodhya, Bharata also dressed like an ascetic, like Ram. He placed those sandals of Ram on the throne of Ayodhya. He built himself a simple straw hut in Nandigram, near Ayodhya, and looked after the royal affairs and rule of Ayodhya as a regent of Ram. In Chitrakoot, Ram was now visited by many people from Ayodhya, and this constant stream of visitors disturbed the peace of the sages who dwelt in the forest. So, Ram decided they would leave Chitrakoot and live elsewhere.

Ram, Lakshmana and Sita soon left Chitrakoot, and went to the hermitage of sage Atri. They were welcomed by the sage. Ram advised Sita to learn the duties of wifehood from Anusuya, Sage Atri’s wife. While they spent their time there, Anusuya gave Sita many lessons in the duties of an ideal wife.

When they left, she gifted Sita with celestial garments and ornaments that always looked fresh and new. They had been given to Anusuya by Indra’s wife Shachi. Thus blessed by Atri and Anusuya, the three proceeded towards Dandaka van (the forest called Dandaka).

On the way, they met Viragh, a demon who blocked their way. He wanted to take Sita away, but Rama killed him. As soon as he was killed, he was released from the curse that made him a demon. He took his original form of a Gandharva (celestial being) and flew off.

In Dandaka forest, Ram went to the hermitage of Sharbhanga Rishi. The aging sage was awaiting the arrival of Ram and postponing the moment of release from his earthly form till he had been able to have his darshan. Meeting Ram fulfilled his desire. Then, with the energy generated by his yogic powers, he self-immolated his body by  generating a flame, and departed for heaven.

The sages living in Dankakaranya showed Ram around the dense forest. He saw heaps of human bones strewn in the jungle. The sages told Ram that these were the remains of rishis who had been killed by demons. Ram took a vow then and there, to rid the earth of all demons.

They walked on to reach the garden and hermitage of Sootikshna. While the sage was meditating, Ram appeared in his heart in his divine form. Sootikshna was filled with devotion and adoration of Ram. He then led them to the ashram of his Guru Agastya. The venerable sage extended an emotional welcome to Ram, Sita and Lakshmana. He gifted Ram with amogh weapons that never miss their mark, so that he could more easily kill all demons.

Ram then asked Sage Agastya to suggest a place where they could spend the rest of their exile. The sage told them of a place in Jansthan, on the banks of the river Godavari, at Panchavati. Ram, Sita and Lakshmana set out to seek that spot suggested by Sage Agastya. 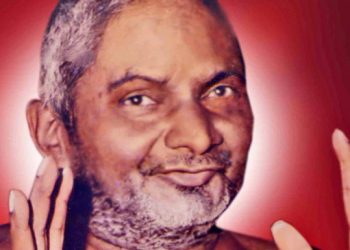