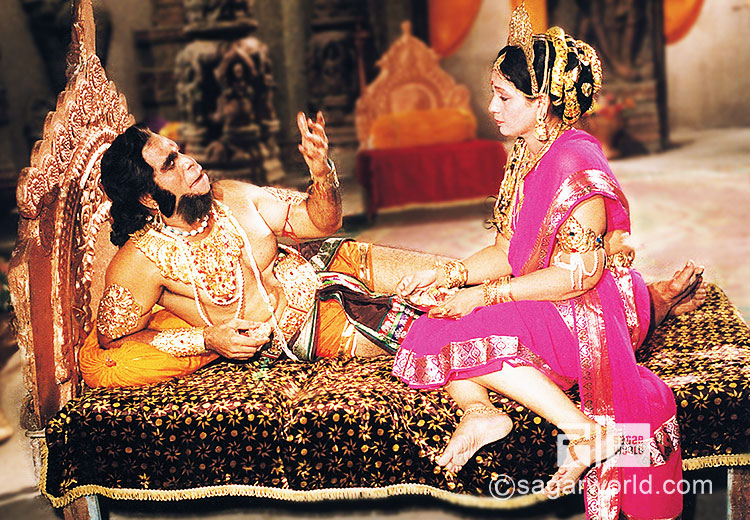 Baali or Vaali, the king of monkeys, was the elder brother of Sugreeva. He was born by the grace of Lord Indra, who had given him a celestial necklace. It was a necklace with special properties for, while wearing it, if Bali battled with anyone, half the strength of his opponent would be transferred to him.

Hence Bali became invincible as his opponents, immediately lost half their power and energy as soon as they faced him in a fight. He had never lost a fight or battle. Bali’s wife was Tara, and his son was Angad, who became a favorite of Shri Ram. The capital of Bali’s kingdom was Kishkinda.

When he heard the tales of Bali’s immense prowess, Ravan once came to challenge him to battle. At that time Bali or Vali was busy with his Sandhyavadan (evening prayers). Without moving from his sitting posture, Bali caught hold of Ravan and tucked him under his armpit and continued with his prayers.

Later, Bali or Vali forgot about Ravan, who stayed tucked in Bali’s armpit for six months. Disgusted with the odor of sweat in the armpit, Ravan bit Bali hard. Bali or Vali thought it was a body louse that had bit him and raised his hand to scratch his armpit.

As soon as he raised his arm, Ravan jumped out and began to run away, but Bali or Vali caught hold of him and gave him to his son Angad to play with, as a toy. Finally Bali’s wife Tara, felt sorry for Ravan and let him go. In the end, Ravan befriended Bali.”Bali, the king of monkeys, was the elder brother of Sugreeva. He was born by the grace of Lord Indra.”

Once, the demon named Dundubhi took the form of a wild buffalo and arrived at Kishkinda, challenging Bali or Vali to fight him. Bali caught hold of his two horns and swung him around in circles. Then he hurled him away with such strength that he fell far away on the Rishyamukha mountain at the hermitage of Rishi Matanga and died there.

Another time, Durmad, the son of the demon Maya, arrived at Bali’s door, drunk with the disillusioning power of his own strength. He yelled and shouted for Bali to fight him. Bali gave him one blow and sent him running off with fear. Bali and his brother Sugreeva followed him to finish the fight, but the demon ran into a cave.Bali too was about to follow him but before he did so, he declared to Sugreeva; “If I do not come out of the cave by the end of one month, consider that I have been killed at the hands of Durmad.” Bali then ran into the dark cave.

One month passed, and instead of Bali, Sugreeva saw a stream of blood flowing out of the cave. Sugreeva thought that it was Bali who had been killed, so he placed a huge rock across the mouth of the cave to contain the demon. Then he returned to Kishkinda. The monkey clan persuaded him to take the place of his brother and much against his will he was crowned King of Kishkinda.”

Meanwhile Bali had killed Durmad, but when he tried to come out of the cave, he found the exit blocked with a great stone. Somehow he managed to move it and reached Kishkinda. When he saw Sugreeva seated on the throne, his anger knew no bounds and he lunged at Sugreeva to kill him.

Ram and Lakshman arrived at Rishi Katanga’s ashram. Seated atop the Rishyamukha Mountain, Sugreeva and Hanuman espied the two brilliant young men from afar. They were filled with a doubt as to their intentions.

Could these two be spies sent by Bali? To ascertain that, Hanuman decided to find out about the two visitors, and took the guise of a Brahmin. After he was reassured of their identity and intentions, he introduced them to Sugreeva. Sugreeva narrated the tale of his rivalry with Bali.

Ram said, “I will kill Bali and rescue your wife Roma.” Bali had kidnapped and taken away Sugreeva’s wife by force. Ram told Sugreeva to challenge Bali to a duel. “While you are fighting, I will kill Bali”, said Ram.

At the first duel, Ram could not distinguish between Bali and Sugreeva, as they looked so similar in appearance and form. To tell them apart, Ram put a garland of flowers around Sugreeva’s neck and asked him to resume the fight with Bali.

Bali’s wife Tara cautioned him against the duel but he did not pay any heed and attacked Sugreeva. Ram took aim and hit Bali in the back with an arrow that felled him.

Realizing his error, Bali apologized, and placed his son Angad in Ram’s care. Ram promised to protect and care for Tara and Angad. On Bali’s death, Sugreeva was made king of Kishkinda and Angad was declared as the Yuvraj, the heir apparent. Bali breathed his last at Rama’s feet, and found peace in death.

”Bali breathed his last at Rama’s feet, and found peace in death.”