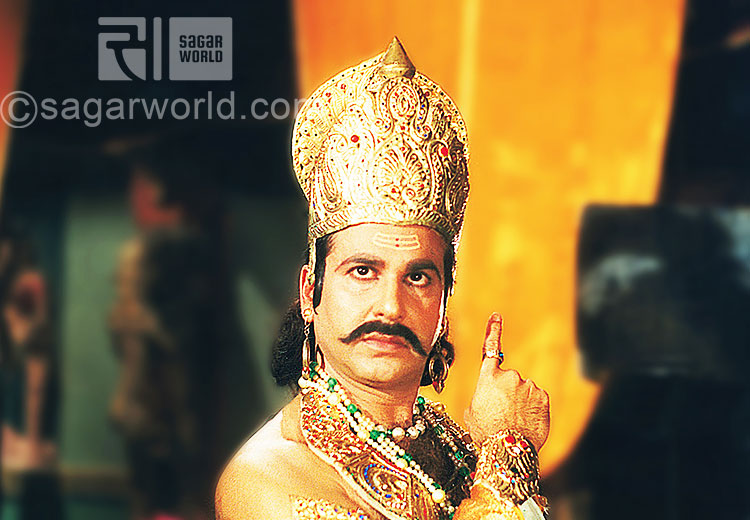 Devi granted him such a chariot and said that, “Seated on this chariot, you will be able to overcome the gods, demons, humans in no time at all. But if you confront someone who has forsaken food, sleep and feminine company for twelve years, do not fight him, for in that case you will be killed.” Devi told him to keep the chariot away and keep it a secret and disappeared. Meghnad then prayed to Lord Shiva and received a boon of always remaining fearless. 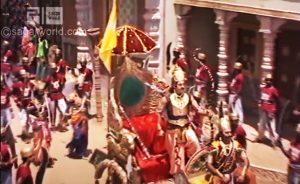 Once Ravana attacked Indra (King of the Devtas who live in heaven) but Indra overpowered him and tied him up. Then Meghnad attacked Indra and defeated him. He not only freed Ravana but also tied up Indra and brought him captive before Ravana at his court in Lanka. With Indra, the king of the Devtas, in such a plight, the devas (celestial beings) began to protest. Then Brahma told Meghnad to untie Indra and let him go. “If you do so, I will give you an amogh (great) weapon, which if it strikes and the wound is not treated overnight will be fatal in effect.”, said Brahma. With this offer from Brahma, Meghnad released Indra. Because he had overpowered and captured Indra, he was also known as “Indrajeet” (victorious over Indra).

Meghnad went to Nagalok (where the Nagas (snakes) dwelt) and waged a battle with Vasuki, the king of Nagas (snakes). He tied Vasuki up and brought him to Lanka. Vasuki requested him to let him go. “I will give you my divine daughter if you do so” , he said.

On this condition, Meghnad released Vasuki. As promised, Vasuki gave his daughter Sulochana in marriage. Meghnad’s might was such that Dev, Danava, Gandharva, Yaksha, all creatures feared him. In fact he became more powerful than Ravana. Ravana was very proud of his son Meghnad.

It was in this state of vanity, Ravana took away Sita from Dandaka forest. After befriending Sugreeva, under the leadership of Rama, Hanuman along with Angad, Jambvant and other warriors started marching southwards in search of Sita. Jatayu’s brother, Sampati led Hanuman to Lanka and he located Sita in the Ashokvatika (garden of Ashoka trees). With her permission, he upturned the entire Ashokvatika and destroyed and killed the guards. Akshaykumar was also killed. Then Ravana sent Meghnad to capture Hanuman. He used the Brahmapash (weapon of Lord Brahma) to catch Hanuman and he got entangled in it. Meghnad took Hanuman to Ravana’s court. Hanuman said, “I am an envoy of Rama.” To which Vibhishana said,  “You must not kill an envoy though you may break a limb.” So instead of killing him, the tail of Hanuman was set on fire. Hanuman in turn set the entire Lanka on fire.

Shri Rama crossed the ocean and arrived at Lanka and a mighty battle was fought between the armies of Rama and Ravana. Many brave Rakshasas warriors were killed in battle. Then Meghnad was sent into battle by Ravana. Meghnad faced Lakshman at the battlefield.

Realizing the prowess of Lakshman, Meghnad used the “Shakti” weapon given to him by Brahma. As soon as he hurled it at Lakshman, he fell in a swoon on the ground. Ravana praised Meghnad for his prowess. Lakshmana’s life was saved because Hanuman fetched the Sanjeevani herb and he could be treated before daybreak.

Next day, Kumbhakarna fought in battle against Rama and he was killed after a furious exchange. Ravana was inconsolable at the death of his brother and cried aloud.

Meghnad came to the battlefield and put fear in the heart of Angad, Jambavat, and Hanuman by having Shri Rama and Lakshman tied in a Nagpash (serpent noose). It was on Narad’s instruction that Garuda (one of the vehicles of Lord Vishnu) freed the two.

At night Meghnad set up a Vijay Yagna (victory sacrifice) before goddess Nikumbaika Devi. Vibhishana told Shri Rama that if Meghnad succeeds in completing the Yagna, then he will become invincible and no one will be able to kill him. Therefore Hanuman, Angad and other warriors successfully disturbed the Yagna.

Meghnad was furious. He created an illusionary Sita, placed her before Rama in the battlefield and cut off her head. Shri Rama was shocked and cried aloud. As suggested by Jambavat, Hanuman hurried to the Ashokvatika and found that the real Sita was alive and well. On being reassured on her well being, Rama sent Lakshman to fight Meghnad and a fierce battle began between the two. In the end Lakshman killed Meghnad, the warrior who had once overpowered Indra.While breathing his last, Meghnad cried out, “Ha Lakshman ! Ha Rama.” Hanuman praised Meghnad for having uttered their auspicious names before he died. When Meghnad died, his arm fell in front of his wife Sulochana, his torso was placed at the gate of Lanka by Hanuman and his head at the feet of Shri Rama. Later, Sulochana sat with the head of Meghnad in her lap and became a sati in his funeral pyre. Such is the story of the might warrior Meghnad.