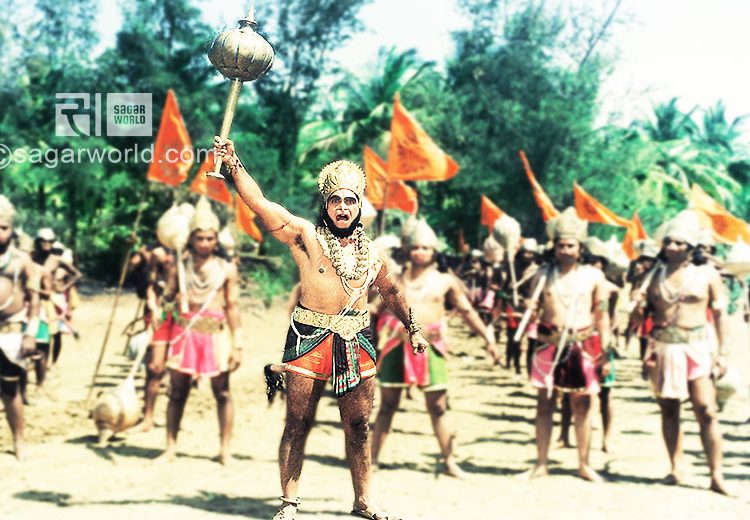 Sugreeva is well known for his friendship with Ram. He was the younger brother of Bali and his wife was Roma. After the death of Bali, Sugreeva became the King of Kishkindha and Tara, Bali’s wife became his second wife. Dadhibala was his son, who later killed Narantaka, son of Ravan.

Sugreeva was born as a fragment of Surya (the Sun God). The story of his birth is amazing. One day Brahma was seated on Meru Mountain in his assembly. Suddenly a tear, a divine drop fell from his eyes.

Brahma threw it on the surface of Meru Mountain. From that teardrop, a monkey appeared. One day the monkey was strolling on Mount Meru and saw a cool, clear pond of water. When he went to drink, he mistook his reflection for another warrior monkey and plunged into the water to kill him.

But when he came out of the water, he found that he had become a human woman. she began to wander around near the pond, when Indra espied with one of his one thousand eyes the lovely lady, that he became so impassioned that he ejaculated at once and his semen fell on her hair. From that deed, was Baali conceived.

Similarly Surya (the Sun God) saw the beauty and was also enamoured of her, so that that his semen landed on her neck. From it, Sugreeva was conceived. With her two sons, the lady found a comfortable place to rest. When she woke up, she found herself back in the monkey form.

After her death, Baali and Sugreeva lived amicably together like brothers. Baali was married to Tara and Sugreeva to Roma. Baali became the king of the Vanara (monkeys) and his capital was Kishkindha. Sugreeva lived respectfully as a younger brother doing his elder brother’s bidding. Hanuman was the minister to, and the dear friend of, Sugreeva.

One day a danava (demon) named Durmad challenged Bali to a fight. Bali was angry and gave the demon such a blow that he fell down unconscious. Then he picked himself up and ran and hid in a cave in the hills. Bali ran after him, with Sugreeva hot on his heels. Bali was about to enter the cave when Sugreeva caught up with him.

Baali said “If I do not come out of this cave within a month, then consider me dead.” After a month a stream of fresh blood came flowing out of the cave. Sugreeva assumed then that Baali had been killed, and as a means to prevent the demon from escaping the cave, he rolled a large stone over the mouth of the cave, and returned to Kishkindha. The monkeys declared him to be the new king and crowned him immediately.

But Baali had not been killed. He had killed Durmad after a month-long struggle but when he made his way to the cave entrance it had just been blocked and Sugreeva and his retinue had, unfortunately, just moved out of earshot of Baali’s shouts. He did not know this, and so was filled with rage. Eventually he managed to get past the rock and returned to Kishkindha.

When he saw Sugreeva seated on his throne, his anger knew no bounds and he leapt to attack Sugreeva without hesitation.  Sugreeva, seeing his elder brother’s fury, took to his heels. He ran everywhere, but Bali remained close at his heels. Sugreeva had gotten weary of endlessly running, when Hanuman discovered a way out.

Baali could not go anywhere near Rishyamukha Mountain, the abode of Matanga Rishi, because of a curse that he had placed on him. Therefore, he suggested, Sugreeva could certainly find a safe haven there. Sugreeva and his followers immediately picked up and left for Rishyamukha Mountain. Hanuman, Jambvant, Nal and Neel; all went along with him.

One day Hanuman was sitting on Rishyamukha Mountain together with his companions. It was the moment when Ravan was carrying Sita away in his flying chariot he had appropriated from Kuber. Sitawas crying bitterly and calling out to Ram and Lakshman. The five monkeys seated on the mountaintop were visible to her, so she threw some of her jewels down to them. Sugreeva kept them safe with him.

When Ram and Lakshman came there in search of Sita, they went to the ashram of sage Matanga. They met Shabri, who advised them to meet with Sugreeva. Therefore, Ram went to Rishyamukha Mountain along with Lakshman. Sugreeva saw them coming from afar. He wondered if they were spies sent by his estranged brother Bali.

So he sent Hanuman to discover who they were and what they wanted. Hanuman assumed the guise of a Brahmin and intercepted them. After he discerned who they were, Hanuman immediately escorted Ram and Lakshman to Sugreeva, who showed them the jewels that had been thrown down to them by Sita. Ram immediately recognised them as hers. Sugreeva offered to help Ram in his search for Sita.

But he said “I can only offer help, not give it myself, because I have to stay hidden here for fear of my brother who is determined to have my life”. Sugreeva then narrated all the events leading to the animosity between the two brothers. Ram heard his tale and offered to kill Baali and free Roma, Sugreeva’s wife, who had been forcibly taken away from him by Baali.

Sugreeva told him that in order to prove able to kill Baali, there were two tasks he must be able to complete. First on the list was lifting the carcass of the Dundubhi demon, and the second was piercing seven saal trees with a single arrow. Shri Ram lifted the skeleton of Dundubhi with ease, using just the big toe of his foot, and threw it into the sea. Then with one sharp arrow, he pierced the seven saal trees with one arrow. So, Sugreeva was assured of Ram’s prowess.

Sugreeva and Ram pledged their friendship, with fire as their witness. Ram said, “Now what you must do is to challenge Baali to a wrestling match. And while you are circling each other I will kill him.” Sugreeva then left the safe zone and approached Baali who moved in to attack him.

But Ram did not shoot and Sugreeva was thrown  into the air, and landed near Ram.  Ram put a garland around his neck and whispered, both of you look so alike, I cannot tell you apart and so I dare not shoot. Challenge him once more and I will quickly end it.” So Sugreeva challenged Baali again and this time Ram’s arrow whistled out promptly from behind a tree. Baali fell down unconscious.

When he awoke, Baali demanded of Ram, “Why have you taken the side of my brother and killed me, when I have not done you any harm?” Ram said “Sugreeva is your younger brother and your quarrel is with him; his wife should have been treated like a daughter by you.

But due to your animosity towards him, you took her away and treated her as your own wife. It is because of this grave sin, and my friendship with Sugreeva that I have killed you.” Bali asked for forgiveness. He placed his wife Tara, and son Angad in Ram’s care, then respectfully bowing to Ram’s feet, he breathed his last breath.

Ram made Sugreeva the King of Kishkindha, and Bali’s son Angad was declared Yuvaraj (prince designate). Sugreeva resumed life happily with his wife Roma and Tara who was also with him. Meanwhile Sugreeva recruited monkeys from all over and sent them out to search for Sita in all directions.

Under Angad’s leadership, the team headed for the South, including Hanuman and Jambvant.  It was at this time that they learned where Sita was, and Hanuman, reminded of his own celestial powers, leapt over the ocean searched for and found Sita, and set Lanka on fire. Under Sugreeva’s command, Nal-Neel constructed a huge bridge across the ocean, and Shri Ram with his entire army crossed over to Lanka.

Ravan was being entertained with song and dance in the evening, when Sugreev reached him in one leap and stood before him. He pushed Ravan off his throne, kicked and punched him and returned to the camp. Now the battle between Ram and Ravan began in earnest. When Sugreeva led the army and killed the son of Kumbhakarna, Kumbh, Mahodar and Virupaksh were also killed by him. In the end Ravanwas killed by Ram. Sugreeva maintained his friendship with Ram and proved to be a true, reliable ally.