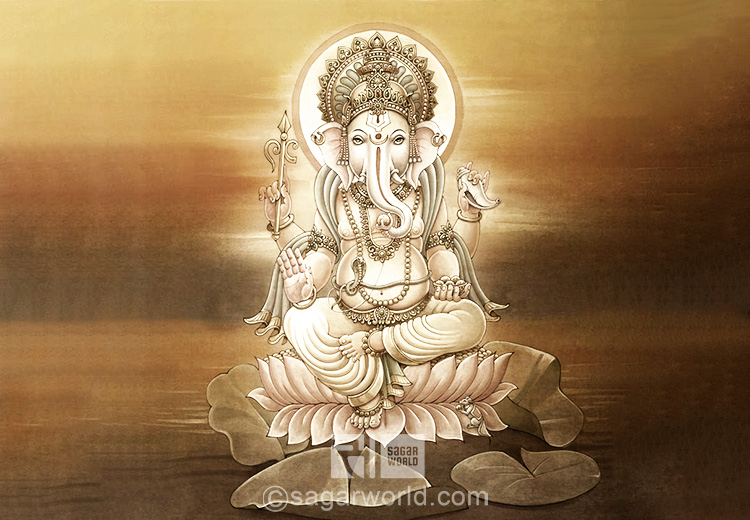 Ganesha is the lord who is always worshipped first in any Hindu religious ceremony. That is why he is known as ‘Prathmesh’, which means ‘First God’. He is the son of Lord Shiva and Parvati. He is known as the principal of knowledge and intellect. A mouse is the carrier of Lord Ganesha and his favorite food is modak (round sweet balls made out of gram flour). Lord Ganesha has few other names like Ekdant (with one tooth), Lambodar and Gajanan. Ganesha is famous for writing with speed. This is the reason why Vyasji had dictated Mahabharata to Ganesha.

Ganesha is not only worshipped in India but also in Java (Indonesia), Burma (Myannmar), China, Japan and Tibet with different names. Few modern scholars call Ganesha as ‘God of agriculture’. As he is reputed to be a remover of obstacles (Vigneshwara) he is propitiated before the beginning of any new venture, whether it is the building of a new house, the writing of a book, the beginning of a journey or the starting of a new business. Ganesha is represented as a short, pot bellied man with yellow skin, four arms and an elephant head with only one tusk. In his four hands, he customarily holds a modak, an axe, a lotus flower and the fourth one blesses the devotees. He is the presiding deity of the Muladhara Chakra, the psychic centre in the body in which the Kundalini Shakti resides.

His Bija Akshara (root syllable) is “gung”, pronounced to rhyme with the English word “sung”. He is the lord of harmony and peace; lord Ganesha represents Om or the pranava, which is the chief mantra among the Hindus. His mantra is ‘Om gung Ganapathaye Namah.’

Lord Ganesha is famous as a Lord of Riddhi-Siddhi, who are his wives (when pleased with our prayers he makes us rich and successful), that is why he is also known as “SIDDHI VINAYAK”. There is a famous story how Lord Ganesha got an elephant face.

According to the story, Parvati (Ganesha’s mother) was taking a bath and Ganesha was guarding the door. He did not allow even Shiva to go inside, so Lord Shiva got very angry and he cut off Ganesha’s head. But when Parvati came to know about it, she pleaded Shiva to get back Ganesha’s head. So Shiva went in search for somebody’s head and the first animal he found was an elephant so he cut its head off and fixed it on Ganesha’s body.

There is a story about Ganesha’s wisdom. Shiva decided that whoever would circumnavigate the earth and come back first to the starting point had the right to be the elder one. Kartikeya (Ganesha’s brother) flew off at once on his vehicle, the peacock, to make a circuit of the world.

But the wise Ganesha went, in loving worshipfulness, around his parents and asked for the prize of this victory. Lord Shiva said,” Beloved and wise Ganesha! How can I give you the prize? You did not go around the world!” Ganesha replied,” No, but I have gone around my parents, my parents represent the entire manifested universe.” Thus, the dispute was settled in favour of Lord Ganesha, who was thereafter acknowledged as the elder of the two brothers.

Mother Parvati also gave him a fruit as a prize for this victory. This shows how intelligent He was Each God and Goddess in Hinduism has a vehicle of his or her own. Ordinary Hindu may consider these vehicles as mere animals or means of transportation but they have a far deeper symbolism. These vehicles actually represent symbolically, the various energies that exist in the universe as well as in human beings. Each god or goddess is in charge of a particular energy, which he or she rides and controls at his or her will.

The little mouse that Ganesha is supposed to ride upon is another enigmatic feature in his iconography. The mouse is, in every respect, comparable to the intellect. It is able to slip unobserved or without our knowledge into places, which we would have not thought it possible to penetrate.

By showing the mouse paying subservience to Lord Ganesha it is implied that the intellect has been tamed through Ganesha’s power of discrimination Ganesha’s large head is symbolic of the wisdom of the elephant. His large ears, like the winnow, sift the bad from the good.

Although they hear everything, they retain only that which is good; they are attentive to all requests made by the devotees, be they humble or powerful. Ganesha’s trunk is a symbol of his discrimination (vivek), a most important quality necessary for spiritual progress. Ganesha is worshipped on Tuesdays, which is the day ofplanet Mars/ Mangal, hence he is also called Mangalmoorti. Mars is a planet connected with Ganesha. Mars is an action oriented planet and if properly placed in a horoscope, can bring a lot of prosperity, wealth and also spiritual upliftment.

Ganesha Chaturthi is one of the most popular of all the Hindu festivals. This is the birthday of Lord Ganesha.  According to Hindu calendar, it falls on the 4th day of the bright fortnight of Bhadrapad (August – September). It is observed   throughout India, as well as devoted Hindus in all parts of the world.

Ganesha Chaturthi is the most important of all festivals in Mumbai and Pune and is celebrated with great aplomb amongst the Marathi community worldwide. On the occasion of the Ganpati festival, a large number of idols are made of all possible sizes and people buy them to keep them in their houses as a divine guest for one and a half, five, seven, ten days or twenty one days in exceptional cases, after which the idol is taken ceremoniously and immersed into the river, sea or well (Visarjan).