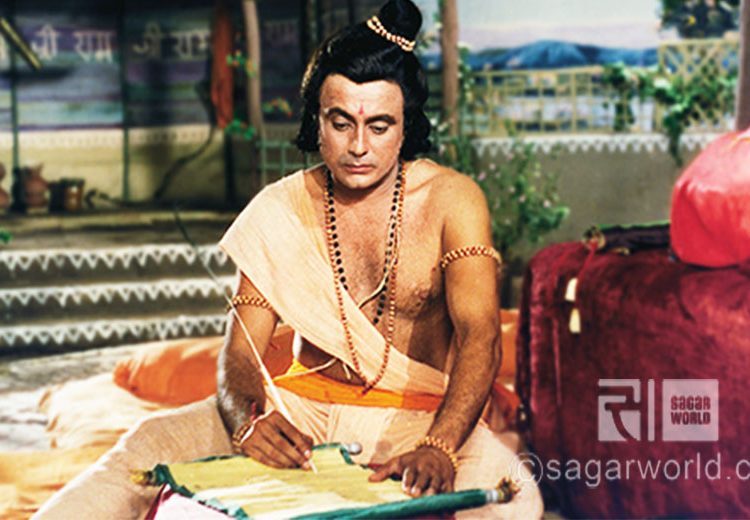 Bharata was the son of Dashratha’s third wife Kaikeyi. Ram was extremely fond of his younger brother Bharata. His name was carefully selected by Sage Vashishtha for his innate ability to look after the welfare of the subjects and keep them well fed and nurtured. In the kingdom of Ram, the care of subjects and welfare of his people was a task assigned to Bharata. Shatrughna and Lakshmana were younger than Bharata.The single motto of Bharat’s life was to follow the example set by Ram’s ideal behavior. He cheerfully carried out whatever task was given to him by Ram. None could match Bharata in his attitude of sacrifice, un-worldliness and devotion. He was as close to Ram as one could be.

When Kaikeyi was cajoled by her cunning maid Manthara to ask Dashratha for the two boons he owed her, a fourteen-year exile for Ram and the throne for Bharata, Shatrughna and Bharata were away visiting his uncle at Kaikey (near present day Kashmir). On returning to Ayodhya, Bharata heard that Ram, Lakshmana and Sita have left for the forest and Dashratha has passed away in grief, he was greatly shocked.

He considered the throne and crown as the root cause of selfish behavior and disputes and decided to give it up. Along with family members and court seniors, he went to the forest to persuade Ram to accept the throne.

They reached Chitrakoot where the three, Ram, Lakshmana and Sita were living like ascetics in simple huts. However Ram persuaded Bharata to return to Ayodhya and told him that they must keep true to Dashratha’s vow.

To be able to do so, Bharata, requested Ram for his charan paduka (sandals). He also stated that if Ram delayed his return to Ayodhya even a day longer than the promised fourteen years, Bharata would take his own life.

He returned to Ayodhya and placed Ram’s paduka (sandals) symbolically on the throne. Considering himself a representative of Ram, he managed the affairs of the kingdom for fourteen years. Till Ram returned, Bharata lived in a simple but, like on ascetic at Nandigrama near Ayodhya.Bharat’s total devotion to Ram and his unquestioned adoration are held as role models and shine like a beacon of ideal character, illuminating the path for those who follow.