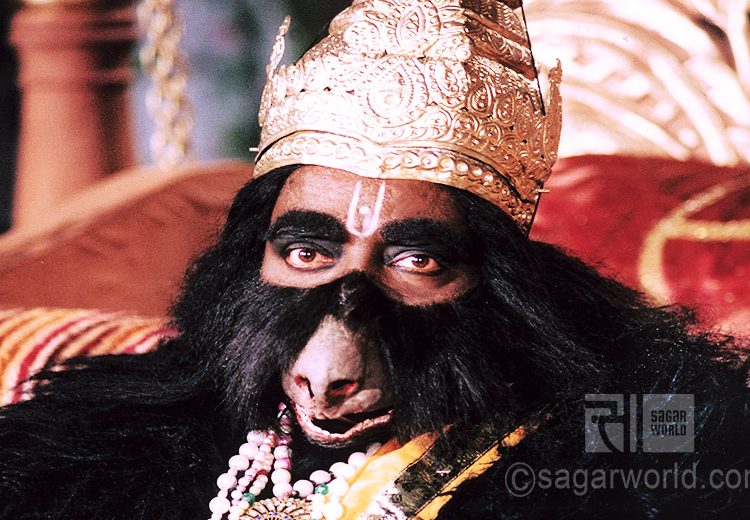 Jambvant, the King of bears was the oldest of the soldiers in Ram’s army. He was also his counselor.When the earth cried out and Devas complained, a comforting announcement declared that God would appear on earth to end the atrocities of Ravan and save the people from his terror.

Then Brahma told Indra and other Devas that God will soon appear in human form on earth. “Hence I request all of you, to give up your deva form and appear on earth in the form of monkeys and bears to help God in his task. A part of me has appeared as Bear King Jambvant, when I sneezed.”Jambvant was aged and elderly. As he was the son of Brahma, Ram revered him like a father. He had amazing power and strength. When Angad led Hanuman, Jambvant, Nal Neel and other vanaras in search of Sita; they were discussing how to reach Lanka, while they sat at the other shore of the sea.

Jambvant narrated how strong he used to be. He said when at danava king Bali’s Yagna, Lord Vishnu appeared in Vamana avatar and measuring the donation of land in three paces he was present at that place. The lord had covered two worlds in his two gigantic paces and placed his third footstep on the forehead of the devout Bali. In two seconds, he made seven circumambulations of that magnificent form of the lord. He used to cross the ocean several times as if it were just cow’s feet. Inspired by his stories, Hanuman decided to leap across the ocean to reach Lanka.

During the Ram-Ravan battle, when Lakshmana fainted, it was Jambvant who suggested bringing Sushena, the physician. When Meghnad came back to the battlefield, he tied Ram and Lakshmana in a Nagpash (a snake noose). It was Jambvant who challenged Meghnad. When Meghnad used a Shakti weapon on him Jambvant caught hold of it and used it to wound Meghnad. He caught hold of one of his legs, twirled him around and threw him high at the gate of Lanka.

When the youngest son of Ravan, Narantaka, came to the battlefield, he made all vanaras and bears faint and to kill Ram-Lakshmana, he suddenly appeared before Ram and wielded a sharp dagger. It was Jambvant who bravely pulled the dagger away and used it on Meghnad and made him faint.

He caught hold of his foot and spun him around five times before throwing him down on the ground and slammed his head on the earth. Yet he did not die, as he was protected by his boon. At last Jambvant caught him by the foot, and flung him to fall in front of Ravan.Sugreeva’s son Dadhibala killed Narantaka, and then Ravan himself came to the battlefield. Ram cut off his heads and arms but they only joined back together to his body at once. Then, enraged, Angad, Hanuman, Dwand, and Dwividh attacked Ravan.

But in his fighting fury, Ravan made all the vanaras unconscious. Then Jambvant used his closed fist to rain a blow on Ravan and stunned him in his chariot. His charioteer quickly took him back to the palace.At last Ravan was killed and Ram got Sita back. Then came the joyful prosperous Ramarajya (rule of Ram) on earth. When Shri Ram finished his Lila (play/game) on earth and decided to quit his mortal body to return to Vaikunth (the abode of Vishnu), he asked Hanuman and Vibhishana to stay on earth in their mortal forms. He told Jambvant “You must also remain here on earth till the Dwapar Yuga, and wait till I appear as Krishna.”

At the end of the Dvapar Yuga, when Shri Krishna was born into the Yadava dynasty, he married Jambvant’s daughter, Jambvanti, and thus made Jambvant his father-in-law. It was but natural that Jambvant got this honor, for he was a partial incarnation of Brahma.

Indra - King of Angels in Heaven