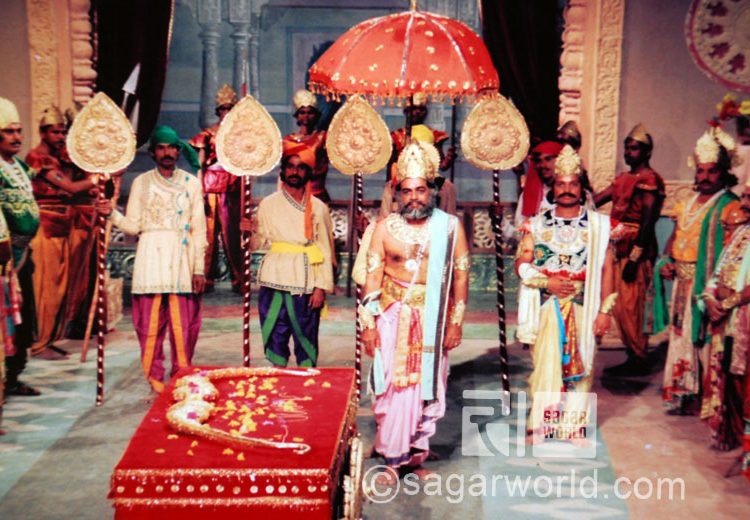 Shiridhwaja was the name of Raja Janaka. He belonged to the Nimivansha (Nimi clan), which originated with the King Nimi who is a part of the age-old stories of Puranic lore. The son of king Nimi was Mithi, who had a son called Janaka and from then on, the kings of the Nimi clan began to be addressed as Janaka.

The son of the first Janaka was Ahorat, who was given the charge of keeping Shiva’s bow after the slaying of Tripurasura by Shiva. The Gods placed it in his care. Created by the celestial designer Vishwakarma, the bow of Shiva was much venerated by the people of the Nimi clan.

One of the kings in Nimi’s dynasty was Mithi, a mighty warrior and the kingdom was named Mithila in his honor. Sita’s grandfather/Janaka’s father was Hrashvaroma, who had two sons, Shiridhwaja and the younger Kushadhvaja. After the death of their father, it was Shiridhwaja who brought his brother up with paternal care and love, and later made him the king of Sankashya.

ughed the fields during a terrible famine. She was the incarnation of Goddess Lakshmi. The other daughter was Urmila. The younger brother Kushadhvaja had two daughters, Mandavi and Shrutkirti.

King Janaka was a very religious and spiritually inclined man, always surrounded by wise and learned sages and Rishi’s. Ashtavraj Rishi was his guru for spiritual development. There were often long debates on matters of religion, spirituality and inner development at his court.

As Janaka was perpetually inclined to seek inner solace rather than outwardly bodily pleasures he was called Videh, detached from the physical matters. His daughter was therefore called Videhi.

When she was a young girl, Sita once playfully lifted the mighty bow of Shiva that was placed in the royal armory. King Janaka was amazed when he saw her lifting it with one hand for no being, no man, god, deva, danava, gandharva, or dikhpal had ever been able to move the bow, let alone lift it aloft.

He realized that his daughter, who had miraculously appeared at the edge of the plough from the field, was indeed a divine incarnation. It was then that Raja Janaka decided that the bow of Shiva would be used to select the right suitor for Sita. Whoever lifts that bow, shall win my Sita’s hand he decided.

The mighty bow of Shiva, with which he had killed Tripurasura was picked up with great ease by Ram and broke as soon as he touched it. Sita put the varmala around Ram’s neck accepting him as the chosen groom. Lakshmana was married to Sita’s sister Urmila. The two brothers Bharata and Shatrughna were wedded to Mandavi and Shrutkirti, the daughters of Janaka’s brother Kushadhvaja. King Janaka was overjoyed to be related by marriage to the noble king of Ayodhya.

King Janaka was revered and honored by his subjects and sages as well as the gods. However, as the father of the illustrious Sita, and father-in-law of the Vishnu avatar Ram, his stature became greater still. His association with the divine couple, Ram and Sita, has made him a glorious part of the Ramayana.

Jambvant - the king of bears, and Rama’s advisor