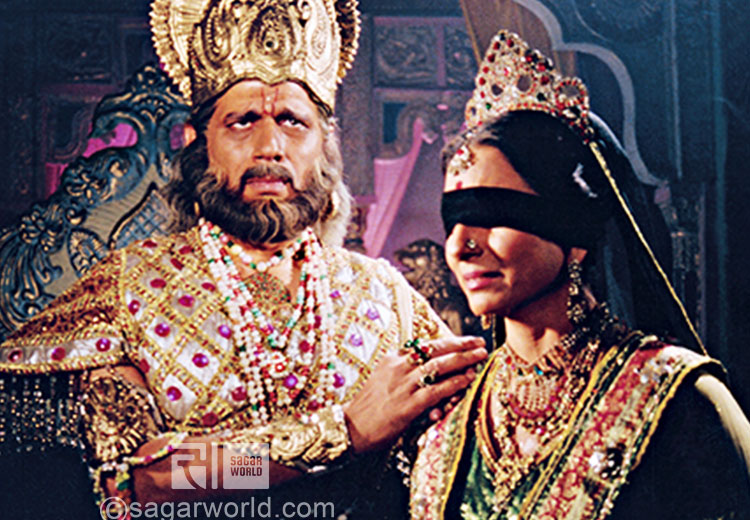 After Vichitravirya’s death his mother Satyavati sent for her first born, Vyasa. According to his mother’s wishes, Vyasa visited both the wives of Vichitravirya to grant them a son with his Yogic powers. When Vyasa visited Ambika, she saw his dreadful and forbidding appearance with burning eyes. In her frightened state, she closed her eyes and dared not to open it. Hence her son, Dhritarashtra was born blind.Dhritrashtra got married to Gandhari. Gandhari also covered her eyes all her life.

Sanjay, Dhritrashtra’s charioteer was blessed by Sage Vyasa with the ability to see the past, present and the future, narrated important events of the Kurukshetra war, a war fought between the Kauravas (the sons of Dhritarashtra) and the Pandavas, to the blind king. Dhritarashtra’s sorrow increased day by day as an ever increasing number of his sons were slain by Bhima.

He frequently bemoaned his ineffectiveness in preventing Duryodhan from going to war. Sanjay often consoled the bereaved king but reminded him every time that dharma was on the Pandava side and a war against Krishna and Arjuna could not be humanly won regardless of the strength of the opposing force. The first stanza of the Bhagavad Gita is a question from Dhritarashtra to Sanjay asking him to recount the Kurukshetra war.