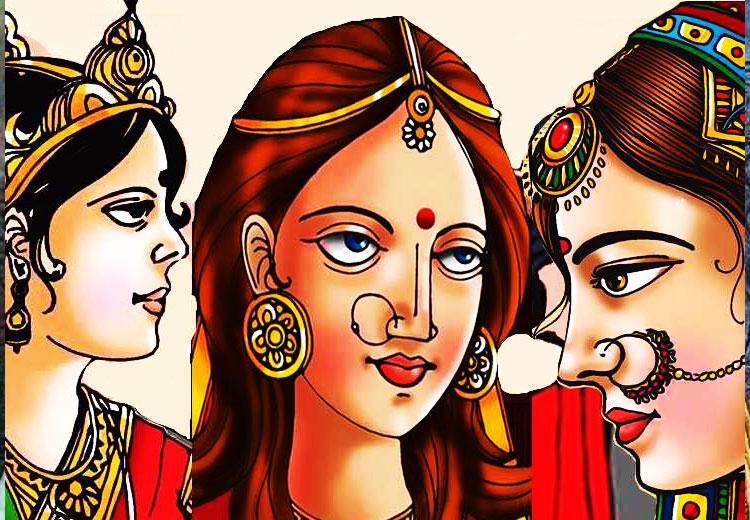 Once while hunting in the jungle, King Shantanu saw Satyavati, daughter of Nishadraj and was fascinated by her beauty. Shantanu proposed her for marriage.

Nishadraj put a condition for the marriage that only Satyavati’s son will become the king. Shantanu did not agree to it and returned disheartened.

His son Devvrata could not see his father in pain and so he went to Nishadraj’s house.

Due to this terrible vow, Devvrata became famous in the name of Bhishma (which means terrible). Shantanu and Satyavati got married. They got two sons Chitragand and Vichitravirya. After some time, Shantanu died. Later, even Chirtagand died.

The King of Kashi had organised a “Swayamvar’ (selection of husband by a princess in public) for his three daughters. Bhishma went to the Swayamvar for his brother Vichitravirya.

He defeated the rest of the Kings present at the Swayamvar and came with the three ladies and handed them over to Vichitravirya.

Amba, the eldest daughter of Kashi King, told Bhishma that she had considered King Shalya as her husband, and that in the Swayamvar she was going to accept him.

She also told Bhisma that as he was a pious man, he should do whatever he feels is right.

Meanwhile, Amba went to King Shalva, but Shalva rejected her saying that Bhishma had kidnapped her so he cannot accept her.

Distressed and afflicted, Amba went for a deep penance to take revenge with Bhishma.

Lord Shiva was pleased with her penance and gave her a boon that she could destroy Bhishma.

Amba asked Shiva, “I am a weak woman, how will I defeat Bhishma in the war?” Lord Shiva said, “You will be reborn as a daughter to King Drupad and after few years you will convert into a man and be the reason for Bhishma’s death.”

Lord Shiva went away after giving the boon and Amba entered the fire.

In her rebirth, she was born as the daughter of King Drupad. King hid the fact that she was a daughter and treated her as a son. He became famous as Shikhandi. Shikhandi was married to Darshan king Hiranya Varma’s daughter Uma.

After the marriage, when the secret about Shikhandi was revealed, Hiranya Varma attacked Drupad.

Shikhandi was distressed and went to the jungle for devout austerity.

There, with the favour of Sthulakarna, a sage, Shikhandi got the body of a man and his father Drupad made him learn archery from Dronacharya.

During the war of Mahabharata, Shikhandi fought from the side of the Pandavas.

Bhishma came to know from Naradji about the story of Amba’s penance and the rebirth in the form of Shikhandi.

That is why when Shikhandi came in front of Bhishma during war, to get rid off the sin of killing a woman, Bhishma did not strike at her and he was injured with Shikhandi’s arrows and fell on the death bed.

This way, Amba took her revenge and she became the reason for Bhishma Pitamah’s death.

ANIRUDDHA – the most handsome man on earth

Akroor -The Devotee – Employee Of Kans

Akroor -The Devotee - Employee Of Kans