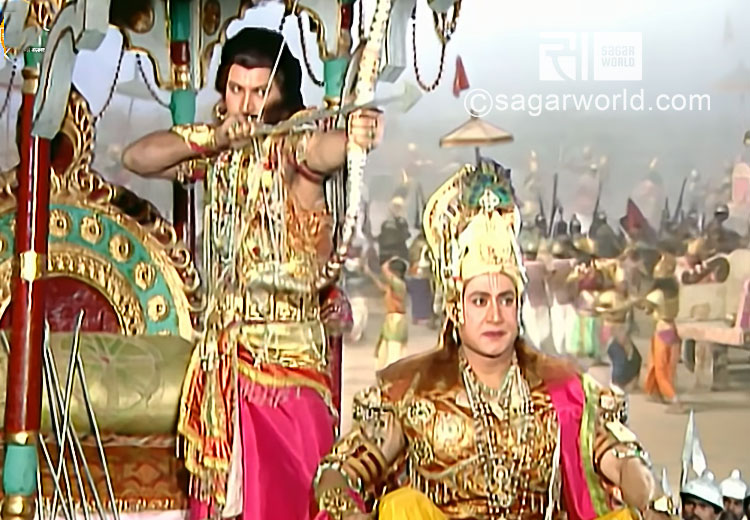 Arjun was the son of Hastinapur King Pandu and his wife Kunti. Kunti had summoned for Lord Indra (Lord of the Devtas in the heaven) with the help of the mantra given to her by Sage Durvasa. With the conjunction of Indra and Kunti Arjun was born. One of the names of Kunti was Prutha. That is why Arjun is also known as Parth. Arjun was third of the five Pandavas.

Arjun had also excelled in using his left hand for archery. That is why he was called “Savyasachi”. Arjun took over many regions and earned lots of wealth and so came to be known as “Dhananjay”. Arjun was such a peerless archer that he is often referred to as “Jishnu” – the invincible.

Arjun is considered to be an incarnation of Nara, the younger brother of Narayan. He is sometimes referred to as the ‘fourth Krishna’ of the Mahabharata.

Arjun was the favourite student of Guru Dronacharya. Arjun was an expert in archery. A well known story about Arjun exemplifies his powers of concentration. Guru Dronacharya once decided to test his students in their skills of archery. He hung a wooden bird from the branch of a tree and then summoned his students. He asked the first one to aim for the bird’s eye but not shoot just yet. He then asked the student what he could see. The student replied that he could see the garden, the tree, flowers, etc. Drona asked him to step aside and not shoot. He repeated the same process with a few other students.

When it was Arjun’s turn, Arjun told his Guru that the only thing he could see was the bird’s eye. This satisfied the Guru and he allowed Arjun to shoot the bird. The lesson here is the power of focus.

Arjun once noticed his brother, Bhima, who was a voracious eater, eating in the dark as though it was daylight, and realised that if he could practice archery in the dark he would be a master.

Arjun had also learnt the science of arms from Parshuram. During the time of Pandavas exile into woods, Arjuna left his other brothers and embarked on a journey to the Himalayas to meditate upon Lord Shiva. Shiva was pleased with his adventurous nature and gifted him Pashupati Astra, Agneya Astra, Gandiv Dhanush and Akshaya Tunir (never finishing quiver to keep arrows). Arjun was also gifted a huge chariot named Nandighosh by Lord Varun (Lord of rain). Arjun was an expert in archery and use of arms and a valiant warrior. He was also famous as a virtuous, justified and a mannered person. Arjun had learnt the art of dance and music from Chitragupta.

The King of Panchal region Drupad had organised a Swayamvar (choice of her husband by a princess in public) for his daughter Draupadi. Drupad held a contest to choose a suitable match for his daughter. A wooden fish was suspended high above a reflective pool of oil; furthermore, the fish rotated. Contestants were required to string a heavy bow and then hit the eye of the rotating fish, but were allowed to aim only by looking at the fish’s reflection in the pool of oil.

It was Arjun, the peerless archer, who alone was able to accomplish the set task and married Draupadi. He was also married to Subhadra, sister of Shri Krishna. With this marriage, Abhimanyu was born. By marrying Chitraganda, daughter of Manipur king, he became the father of a son named Babhruvahan.

While his visit to Indrapuri (Indralok), a heavenly nymph named Urvashi was fascinated by him. Urvashi expressed her love to Arjun but he rejected it saying that as she was the nymph of Indra’s court, she was like a mother to him. At this, Urvashi got angry and cursed him to remain impotent for one year. During the one year stay of living incognito, Pandavas were spending their time at King Viraat’s house living in disguise. There, Arjun enduring this curse, taught music and dance to Viraat’s daughter Uttara in the disguise of “Brihannala”.

Arjun had a friendly affection towards Lord Krishna. Even Shri Krishna was very fond of Arjun. It was due to this fondness he became the charioteer of Arjun in the war of Mahabharata. At the beginning of war, on seeing the respectable elders like Bhisma Pitamah, Guru Dronacharya and his brothers Kauravas in front of him, Arjun became emotional with love for his blood relation and kept back his arrows thinking of not to fight the war. Then, Krishna revealed to him the Sermon of Gita and motivated him to fight the war.

In Gita, Krishna deemed it Arjun’s duty to struggle to uphold righteousness, without consideration of personal loss, consequence or reward; the discharge of one’s moral duty, he said, supersedes all other pursuits, whether spiritual and material, in life.

Krishna counselled Arjun on the greater idea of dharma or universal harmony and duty. He began with the tenet that, the soul was eternal and immortal. Any ‘death’ on the battlefield would involve only the shedding of the body, but the soul was permanent. Arjun’s hesitation stemmed from a lack of right understanding of the ‘nature of things,’ the privileging of the unreal over the real. His fear and reticence became impediments to the proper balancing of the universal dharmic order. Essentially, Arjun wished to abandon the battle, to abstain from action; Krishna warned however, that without action, the cosmos would fall out of order and truth would be obscured.

In order to clarify his point, Krishna expounded the various Yoga processes and understanding of the true nature of the universe. Krishna described the yogic paths of devotional service, action, meditation and knowledge. Fundamentally, the Bhagavad Gita proposes that true enlightenment comes from growing beyond identification with the temporal ego, the ‘False Self’, the ephemeral world, so that one identifies with the truth of the immortal self, the absolute soul or Atman. Through detachment from the material sense of ego, the Yogi, or follower of a particular path of Yoga, is able to transcend his/her illusory mortality and attachment to the material world and enter the realm of the Supreme.

Arjun played a major role in the victory of Pandavas in the war of Mahabharata. After the end of war, Arjun along with his brothers and mother Kunti went to Himalayas and left for his heavenly abode.

ANIRUDDHA – the most handsome man on earth

ANIRUDDHA - the most handsome man on earth