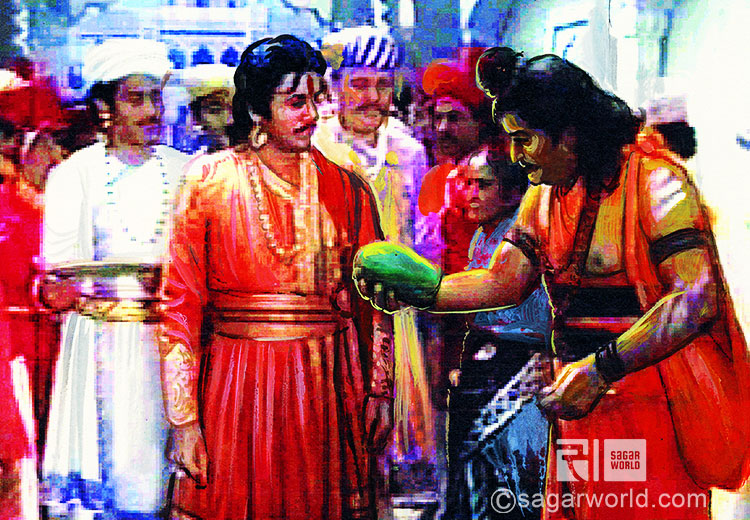 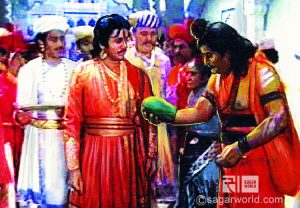 King Vikramaditya(Vikram) was known for his bravery and courage. He was also very benevolent. Many people from his subjects used to offer him gifts.

One Yogi was gifting him a fruit everyday. The king didn’t understand why he was being presented with a fruit daily!One day King Vikramaditya cut open one fruit and found a precious gem inside it.Then he gave an order to bring out all those fruits which the Yogi had gifted him. 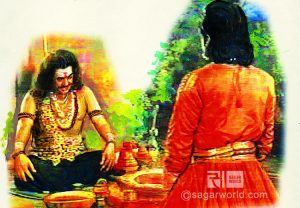 Upon examining them, King Vikramaditya realized that they all had fine gems inside, and wondered what the Sage wanted to convey to him, and what he wanted in return. Next day when he met the Yogi, he asked the reason for those gifts and conveyed that he does not accept costly gifts from his subjects. 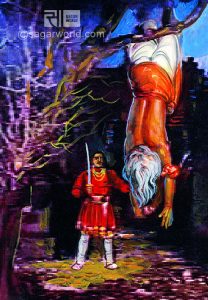 When King Vikramaditya arrived there, the Yogi asked him to go over to ancremation ground crossing a deep jungle, where in a tree he would find a corpse hanging upside down.The Yogi wanted King Vikramditya to bring him the corpse, which he would require for some spiritual accomplishment.

Betaal praised King Vikramaditya’s valour and decided to tell a story to pass the time. Betaal put up a condition that he would fly away if King Vikramaditya opened his mouth and thus he bagan –

There was a famous Devi temple in Pataliputra. People from distant towns would regularly visit this temple. Once, two men named Suryamal and Chandrasen had come from another town to visit this temple. Just after the darshan, when Suryamal turned, he saw a beautiful woman praying there in the temple. 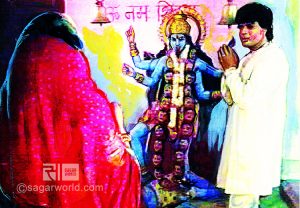 He immediately fell in love with her and thought about getting married to her. He told this to his friend Chandrasen. Chandrasen got very happy and said that they should approach the girl’s father for her hand in marriage.

Both of them went to her residence and Suryamal asked her father for her hand.

Her father agreed on one condition that his daughter was a great devotee of the Devi and she would be allowed to continue praying to the Devi twice a day, even after the marriage. 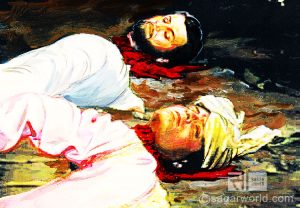 Suryamal agreed to the proposal and was married to her. Just as they were to leave, the girl’s father asked them to stay over for one more day but Suryamal refused, saying that there was going to be Kul Devi puja at his residence the day after the following day, and that his mother had asked him to come back before that.

They left for their house. On their way in the jungle, robbers attacked them.The robbers looted all the jewelerries and beheaded both Suryamal and Chandrasen in the fight that ensued.

When the bride saw her husband lying there dead, she was crestfallen and immediately tried to kill herself. Just then Devi Maa appeared and stopped her from doing so.Devi asked her to arrange the severed heads with the respective bodies. In her nervousness and in a hurry, the bride interchanged the heads with the bodies.

By sprinkling nectar on them, Devi Maa brought them back to life, but as the bride had mixed up the heads, her husband’s head was now fastened to his friend’s body and vice versa!

Vikram wisely replied that since all the body organs are controlled by the brain (head), they act according to the command of the brain. Hence the head is the most vital part of the body, and so the bride’s husband is the one who has the head of her husband. Betaal was very satisfied with King Vikramaditya’s justice, but as Vikram had opened his mouth to speak, Betaal flew away.