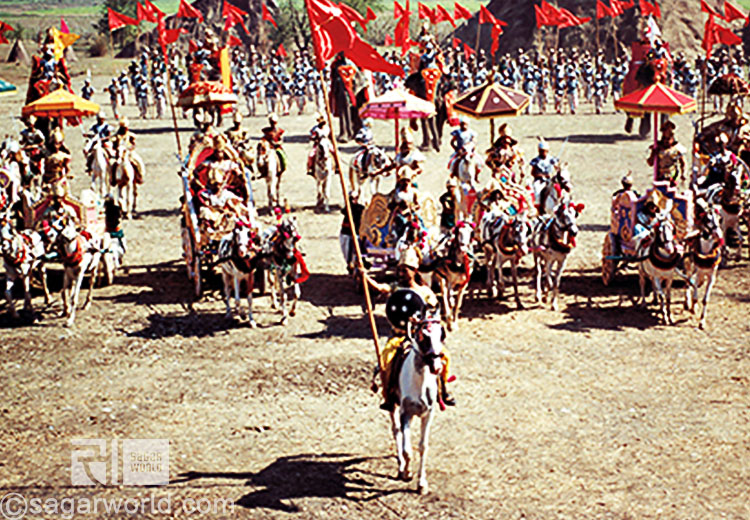 On the battle field of Kurukshetra, Kaurava and Pandavas army were in front of each other. Dhritrashtra was sad as Arjun was asked to get ready for the war.

Yudhishthir first of all took Bhishma Pitamah’s blessings before starting the war, then Guru Dronacharya, Kripacharya and uncle Shalya’s blessings as well and returned to his army.

Draupadi, angry as she was insulted, wanted to take revenge and so was waiting for the war to start. Just then she heard the sound of the conch shell from the Pandavas side announcing the beginning of war.

A fight wast going on between Bhisma Pitamah and Abhimanyu. Pitamah slaughtered Pandavas army but Arjun was hesitant to shoot his arrow at Bhisma Pitamah.the war

Here, from Kauravas side, Shalya and Prince Uttar from Pandavas side were fighting. Prince Uttar attained veergati (the supposed attainment of heaven which a warrior slain in war is supposed to get).

Dhritrashtra and Gandhari were upset on hearing the description of war from Sanjay. The Pandavas were very sad on the death of Prince Uttar and consoled King Viraat. Pandavas were planning militarism for the next day of war.

From the Kauravas side, Bhishma Pitamah, Guru Dronacharya and Kripacharya were discussing on the militarism for the war.

On the second day, a fierce battle was fought between Arjun and Bhishma Pitamah. Bhishma Pitamah could not defeat Arjun. Bhimsen frightened the Kauravas’ army with the blow of his mace.

Dhritrashtra and Gandhari were very sad with the news of the war. Gandhari was so upset with this destroyer war that she did not want to know anything about the war.At the sunset, armistice was declared and Arjun went to meet Bhishma Pitamah in his camp.