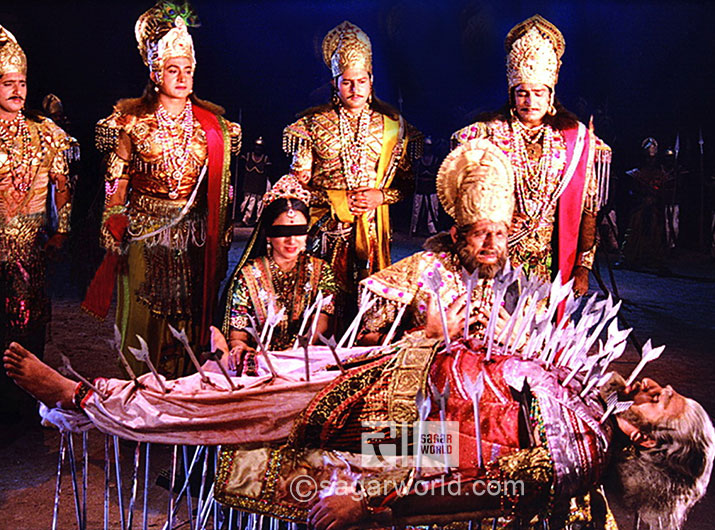 Bhishma was the son of King Shantanu and Ganga. That is why he is also called Gangeya. Once, the eight Vasus (“Ashtavasus”) visited the Vashishtha’s ashram accompanied by their wives. One of the wives took a fancy to Nandini, the wish-bearing cow, and asked her husband Prabhas to steal it from Vashishta. Prabhas then stole the cow with the help of the others who were all consequently cursed by Vashishta to be born in the world of men.

The seven Vasus who assisted in stealing Nandini have their curse mitigated to be liberated from their human birth as soon as they are born, but Prabhas, due to his being instrumental in the theft, is cursed to endure a longer life on the earth, though the curse is softened so that he becomes one of the most illustrious men of his times. It was this Prabhas who took birth as Devavrat (Bhishma).

All of them took birth as Ganga’s sons. Ganga set afloat seven sons in the river as soon as they were born. Shantanu kept the eight one for himself. Though Ganga had married Shantanu on a condition that he will never interfere in Ganga’s decisions, by keeping the eighth child, the promise was broken and so Ganga went away.

The eighth son was Bhishma – he was named Devavrat. He was engrossed in unselfish filial duty. Bhisma was a great warrior and a majestic person. He was an honest person and could sacrifice anything like wealth or heaven but could not part ways from the path of truth.   He learnt the science of arms from Parshuram.

Devavrat became known as Bhishma because he took the bhishan pratigya — the vow of life-long celibacy and of service to whoever sat on the throne of his father (the throne of Hastinapur). This was because when his father Shantanu wanted to marry a fisher woman Satyavati, her father refused; on the grounds that his daughter’s children would never be rulers as Shantanu already had a son (Devavrat). This made Shantanu despondent. To convince Satyavati’s father, Devavrath promised that he would never stake a claim to the throne, implying that the child born to Shantanu and Satyavati would become the ruler after Shantanu.

At this, Satyavati’s father retorted that even if Devavrat gave up his claim to the throne, his (Devavrat’s) children would still claim the throne. At this, Devavrat, to make his father happy, took the terrible vow, thus sacrificing his ‘crown-prince’ title. This gave him immediate recognition among the gods and his father granted him the boon of Swechha Mrityu (control over his own death — he could choose the time of his death, but he was not immortal).

On being adamant about not marrying Kashiraj’s daughter, there was a fight between Parshuram and Bhishma which lasted for twenty three days. The teacher could not defeat his student. In the end, the deities intervened and stopped the war.In the process of finding a bride for his half-brother the young king Vichitravirya, Bhishma cleverly abducted princesses Amba, Ambika and Ambalika of Kashi (Varanasi) from the assemblage of suitors at their Swayamvar. Shalwa, the ruler of Saubal, and Amba (the eldest princess) were in love.

Upon reaching Hastinapur, Amba confided in Bhishma that she wished to wed Shalwa. Bhishma then sent her back to Shalwa who turned her down as it was humiliating for a man to accept a woman so long in the company of another man. She then naturally approached Bhishma who refused her, citing his oath. Amba, who was humiliated and enraged beyond measure, vowed to avenge herself against Bhishma even if it meant being reborn over and over again. Amba was reborn as Shikhandi, prince of King Drupad.

Satyavati’s (Kauravas’ and Pandavas’ grandmother) both the sons (Vichitravirya and Chitraganda) died and no one was left to take over the throne. Then Satyavati called Vyasji and made her widow daughter-in-laws go for Niyog (Ancient Aryan Practice according to which a child widow could have sexual intercourse to beget a child) as a result of which they got three sons – Dhritrashtra, Pandu and Vidur. Vidur though was most healthy, since he was a maid-servant’s son, Pandu was throned the king. Bhisma was working with Kauravas but then also he was biased towards Pandavas because of their truthfulness.

During Mahabharata, Krishna vowed not to pick up weapons, but he lost temper at Bhisma’s valour and picked up the broken wheel of the chariot and ran. On seeing Krishna running, Bhishma folded his hands and said, “O, Almighty! You always protect your devotees’ promises; you protected my resolution because I had vowed today that I will forbid Krishna to pick up the weapons.”

Arjun called for Shikhandi as his charioteer, so Bhishma did not fight because Shikhandi (rebirth of Amba) was born a woman and to strike a woman was deemed unworthy of the chivalrous, also Bhishma observed celibacy.

Bhishma was pierced with arrows and just as he was about to fall, the arrows didn’t let him fall on the earth and made a bed of arrows for him but his head was hanging.Duryodhan and all ran with pillows but Bhishma told Arjun to do it.

Arjun made a pillow out of the arrows. He was thirsty so Arjun shot an arrow on the ground and Devi Ganga appeared and quenched Bhisma’s thirst with her water.

The war ended. Krishna went with Yudhisthir. Bhishma taught religion and prayed God to show him his four handed form (Chaturbhuj) in the end moments of his life. Till the Uttarayan Surya, Bhishma laid down on the bed of arrows. In the end moments of his life, he got engrossed in Shri Krishna with mind and soul. Before he ascended to heaven, he recited to Yudhishtir the famous hymn, “Vishnu Shahastranaam” in praise of Krishna after the war, where Krishna or Vishnu is also called ‘Rama’, among other names of Vishnu, avatars of Vishnu and the names of Shiva.

It is believed that Bhishma died after the age of 350 years. Considering that he was a true Yogi and lived like a true human, this age is not unbelievable.