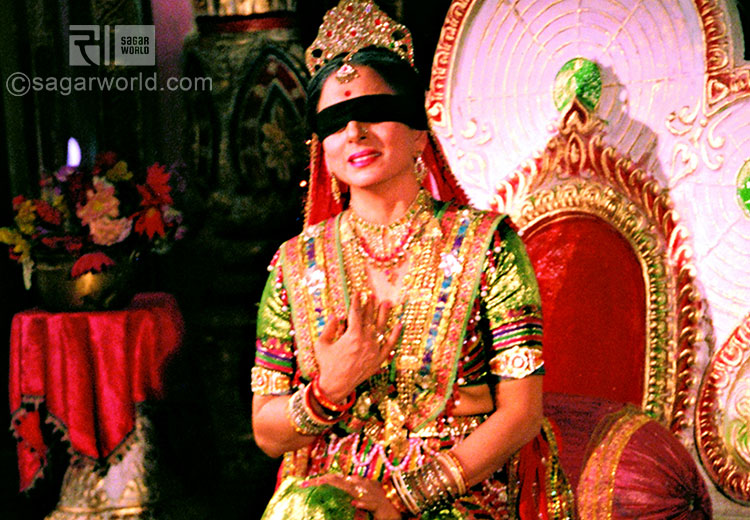 Gandhari was the daughter of King Subal of the Gandhar region. She worshipped Lord Rudra in her childhood and was blessed with a hundred sons.

In those days, the number of members of Kuruvansh (family name) was less in Hastinapur.

That is why on Bhima’s request King Subal got Gandhari married to Dhritrashtra. Dhritrashtra was blind from birth.

So Gandhari also covered her eyes for life time with a band to be able to empathize with the situation of her husband.

According to Rudra’s boon, she got pregnant. At the same time she got the news that Pandu’s wife Kunti has given birth to Yudhisthir.

Even she should have a son very soon, with this intention, she took her foetus out. It was a deadly body.Then Vyasji showed mercy towards Gandhari and he cut that body into hundred pieces and put them into many pots filled with ghee (fortified butter) and other medicines.

Duryodhan, Dushashan etc. hundred Kauravas and a girl named Dushala were formed. This way Gandhari got hundred and one children.

During the war of Mahabharata after the death of Duryodhan, Gandhari cursed Shri Krishna that his family will vanish in the next 36 years.

The result of this curse was so that after Mahabharata war, Yadava family (Krishna’s family) was destroyed due to internal fights.

After the war of Mahabharata, Gandhari was living with the Pandavas. Later, she had a feeling of renunciation so she went to jungles with Dhritrashtra and Kunti.

There, Dhritrashtra, Kunti and Gandhari died due to conflagration, in the forest.

Gandhari was not a negative character in the story of Mahabharata. She sacrificed her vision because she wanted to be able to feel the same way as her husband.

She did not want the Kauravas and Pandavas to fight amongst themselves but the attachment to her sons and husband might have held her back from taking a strong stand to prevent the Great War. This was the biggest weakness but then who can stop what has already been written !

Ganesha – The Remover of Obstacles