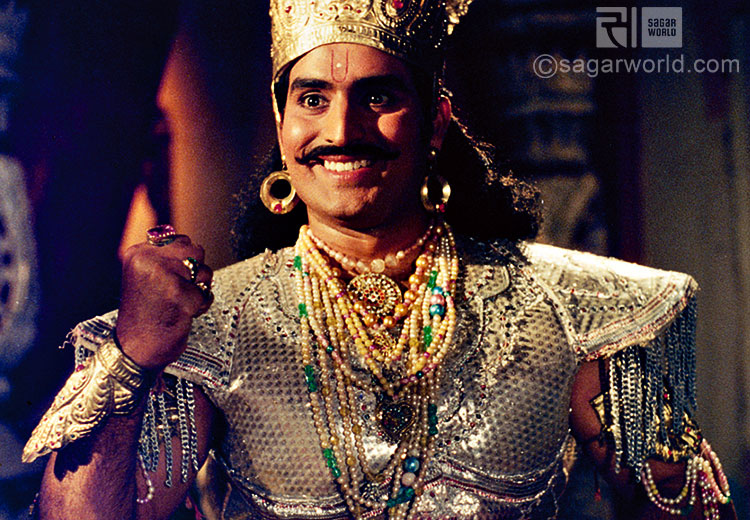 King Dhritrashtra of Kuru vansh (a family name) had hundred sons. Duryodhan was the eldest son.

As they were born in Kuru vansh, all the brothers got best of the education.

They got their education along with their cousins Pandavas. Duryodhan and his cousin Bhima had learnt the art of mace from Krishna’s elder brother Balram.

Bhima had expertise in the art of mace and so Duryodhan was jealous of him. He once tried to kill Bhima by poisoning his food.

He had built Laksha-griha (house made of lac), so that he can put it on fire and kill the Pandavas inside it, but somehow Pandavas came to know about this plan and were saved.

After this, Duryodhan along with his uncle Shakuni organised a game of gamble and deprived Pandavas off everything by cheating them.

Pandavas had put their wife Draupadi in gamble and lost her to Kauravas. When Dushasan brought Draupadi in the courtroom, Duryodhan made her sit on his lap (thighs). Bhima was so angry at this gesture that he vowed to break Duryodhan’s thigh bones with his mace.

According to the terms and conditions of the game, Pandavas went for exile (residing in forest) and were living incognito for one year.

After completing their punishment, when they returned to their kingdom and asked for their share, Duryodhan did not accept to give land as small as a hole of a needle also.

Shri Krishna, as a messenger of Pandavas tried to convince Duryodhan but did not succeed.

At the end, the war of Mahabharata was fought on the grounds of Kurukshetra.

All the Kauravas were killed in this war. At the end of Mahabharata, Bhima attacked Duryodhan’s thighs with his mace and fulfilled his oath by killing him.

Durvasa – the angry sage who cursed many a people

Durvasa - the angry sage who cursed many a people