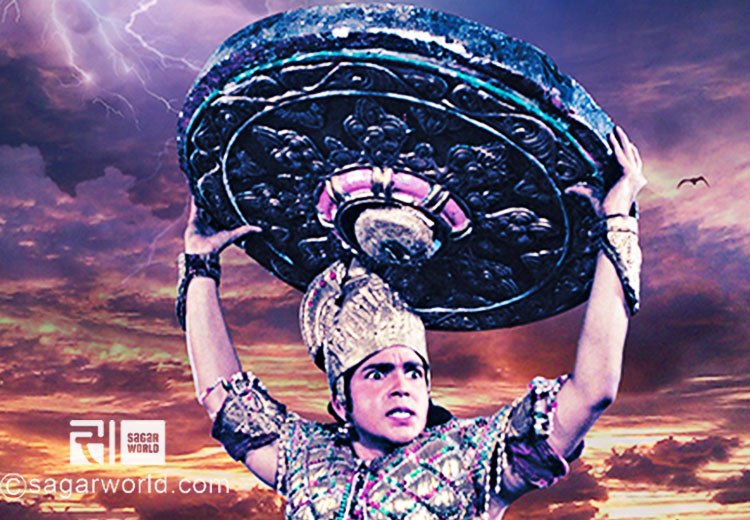 Abhimanyu was the son of Arjun (Kunti’s son) and Subhadra (Shri Krishna’s sister). He was the reincarnation of Varchas, the son of the moon god.

When the moon god was asked to let his son incarnate himself on earth by the other devas, he made a pact that his son will only remain on earth for 16 years as he could not bear to be separated from him. Abhimanyu was 16 years old when he died in war.

While the Pandavas’ lived incognito (in disguise), Arjun taught dance and music in disguise of Vrihannla to Uttara, daughter of Matsya king Viraat.

That time the army of the Kauravas attacked the cow pen of King Viraat. Then, with the help of Vrihannla, Uttar (son of king Viraat) defeated Kauravas.

While Abhimanyu was in Subhadra’s womb, Arjun explained to Subhadra the technique to penetrate the Chakravyuh (The word Chakravyuh is made up of Chakra meaning circle or ring and Vyuh meaning formation.

The Chakravyuh is a formation consisting of 7 concentric circles of warriors rotating in unison.

It was especially difficult to penetrate since the attacker is not able to focus on a still target in front as the targets keep changing with the rotation of the Chakras).

Intelligent Abhimanyu learnt this technique in the womb while listening to Arjun.

Subhadra had fallen asleep midway, so Abhimanyu could only listen to the art of getting inside the Chakravyuh. 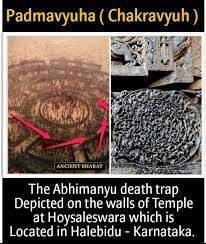 He could not further listen to the story of the technique to get out of the Chakravyuh.

After losing to the Kauravas in gambling, Arjun handed over Abhimanyu to Krishna in order to take care of him while he went on exile.

Shri Krishna taught Abhimanyu, the art of military science, the use of weapons and made him an expert in the art of battle fight.

When Guru Dronacharya became the commander of the army of the Kauravas, he created Chakravyuh and apart from Krishna and Arjun no one knew the art of penetrating the Chakravyuh.

Kauravas kept Arjun busy with war and sent him far away in the battle field. So the Pandavas were worried about who would penetrate the Chakravyuh?

Yudhishthir was in tension. Abhimanyu asked for the permission to go to the battlefield and informed that he had heard half the story of penetrating the Chakravyuh while he was in his mother’s womb.

So he knew the art of getting inside the Chakravyuh but did not know the way out.Knowing this, Bhima and other Pandavas prepared to support Abhimanyu and he penetrated the Chakravyuh on the battlefield and entered inside it.

During the war, Abhimanyu showed great valor and defeated many soldiers of the Kauravas’ army. He defeated mighty warriors like Karna, Duryodhan, Kripacharya and Ashwathama – Here Bhima and other Pandavas tried to enter the Chakravyuh but Jaydrath did not let them enter.

Jaydrath had received a boon from Lord Shiva that during the war, one day he will be able to defeat all the Pandavas except Arjun.

Due to this boon, Jaydrath was successful in stopping Bhima and Pandavas from entering the Chakravyuh.In the end of the day Abhimanyu was died in the Chakravyuh