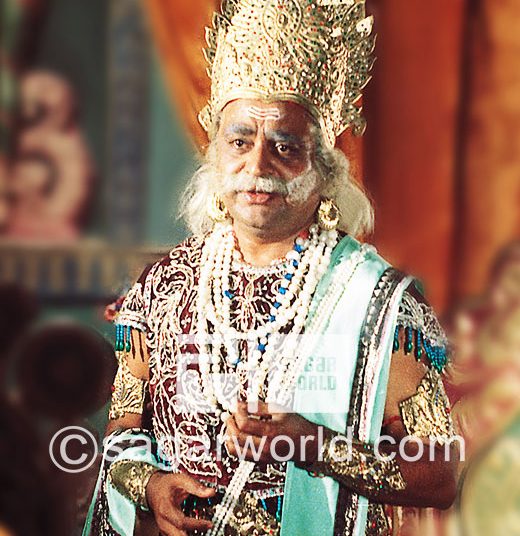 Malyavan was the senior-most minister in the court of Ravan, the King of Lanka. He was also Ravan’s maternal great-grandfather. His father Suketu had three valiant sons; the first Malyavan, second Sumali and third Mali. The three men were as strong as Lord Shiva.

In the earlier days, the golden city of Lanka was the capital of their kingdom. But on being defeated by Lord Vishnu, they had been forced to abandon it. Sundari was the wife of Malyavan. Their sons were VajRamaushthu,Virupaksh,Durmukh, Suptaghna, Yagyakosh, Matra and Unmatra.

Mali’s wife was a Gandharva lady called Vasuda who had four sons. Anul, Anil, Har and Sampati. These four became ministers of Vibhishana, and along with him, joined forces with Ram after seeking refuge with him. All the other sons of Malyavan and Sumali were killed in the battle between Ram and Ravan at the hands of Hanuman, Jambvant, Sugreeva, Angad, Nal Neel, Vidh and Dwividh.

Narad had told Malyavan that during the Tretayuga (one of the four periods the earth goes through, each lasting for millions of years before creation is destroyed by the great Pralaya (deluge) and started all over again) the entire Rakshasa (demonic) clan would be destroyed by Lord Ram.

On the very first day of battle, Ravan was agitated by the vast number of his Rakshasa army who were killed by Ram’s Vanar Sena (army of monkeys). It was then that Malyavan attempted to persuade Ravan that his opponent Ram was no ordinary mortal but the incarnation of Lord Vishnu himself.It would be in Ravan’s best interests to return Sita to Ram and make peace with him and thereby save his clan from destruction.

Instead of considering this sage advice, Ravan became furious to hear this, and, regardless of the fact that Malyavan was both his great-grandfather and a senior statesman, Rava insulted him and told him to blacken his face and join Ram. Malyavan then realized that Ravan’s wrongful ways were bringing about the destruction of Rakshasa’s (demonic forces), and that this was ordained by fate and thus unavoidable and inevitable. He was to be a witness of the death and destruction of the race of Rakshasa’s.

Lakshmi - daughter of the ocean, consort of Vishnu