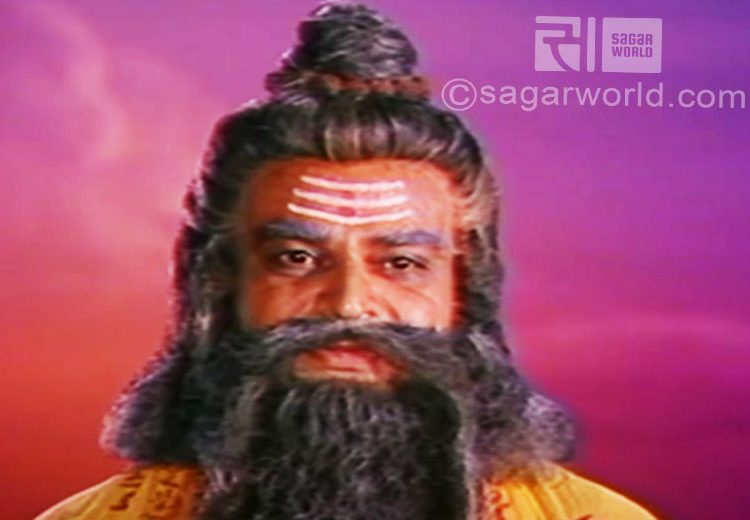 Maharishi Agastya was born as a result of the spilling of seeds in a pot by the gods. When they beheld the lovely apsara Urvashi, the celestial damsel, first Mitr and then Varun (sea-god) deposited their seed in a pot. Agastya was generated from the combination of the two deposits hence he was termed as a son of Mitravarun.

Later from the same pot, Vashishtha was born from the seed of Varuna. Hence he was also considered an offspring of Mitravaruna. However, before this birth, he had been divested of his earthly body as a result of the curse of King Nimi, hence by attaining a new body, he was known as an earthly son of Brahma.Being born from a “ghat” (earthen pot), Agastya was also called “Ghat” Yogi (sage). According to the tales told in Puranic literature, Agastya is considered to be a brilliant sage.Once upon a time the nest of a bird dwelling on the banks of the sea was swept away by the ocean waves. The eggs of the bird were carried away in the nest. The bird couple was sad but helpless and appeared to Agastya Rishi for help. Agastya called out to the ocean and asked for the eggs to be returned.

The ocean did not pay any need to him. Now Agastya was furious. With three palms full of water that he picked up, the entire water of the ocean was soaked up. It was only on a request from Lord Brahma that Agastya restored the waters back to the ocean.

Once, the Vindhyachal Mountain was so filled with vanity, that it rose higher and higher till it blocked the path of the sun. As soon as the chariot of the sun was stopped, the creation was clothed in darkness. The gods then prayed to Brahma for help. Brahma said that the Vindhyachal considers Agastya as his guru and only he is the one who can help us out now. In those days Agastya used to live in Kashi in the North of India. To help the gods, he began a journey from the north to the south of India.

When he saw Rishi Agastya approaching, Vindhyachal bowed down with respect at his feet and lay prone in a “dandavat” (full body including head and feet flat on the ground) posture. Sage Agastya crossed over his bent form and said. Till I return from the south, stay in this prone position.

Agastya then settled down in the Dandaka forest in South India. He did not ever return to the North. So the Vindhyachal Mountain remains low, in a prone position Tadaka and Mareech too became man-eating demons as a result of a curse given by Agastya. There are several such tales of Agastya’s power and prowess.

Lord Ram bestowed the ultimate bliss to Rishi Sharabhanga in Dandaka forest and reached Sootikshana’s ashram. Sootikshana was a disciple of Sage Agastya.

Along with him, Ram, Sita and Lakshman went to ashram of Sage Agastya. Shri Ram spent many peaceful days there. Sage Agastya gave him many celestial weapons. It was on his suggestion that Ram chose to build his forest dwelling at Panchavati on the banks of the river Godavari and stayed there for a long time.

During the battle between Ram and Ravan after the abduction of Sita, Sage Agastya went to Ram and gave him the “Aditya Hriday” (prayer for invoking the Sun God). It was this special invocation prayer that helped Ram to overpower and kill Ravan.

When Ram was crowned King of Ayodhya, Agastya Rishi came and gave several discourses on his duty, ethics and royal decorum. For a long time Ram, Lakshman, Bharat and Shatrughna had the benefit of his good company. Like Guru Vashishtha and Vishwamitra, Sage Agastya had a major contribution in the role Ram played out in his avatar (incarnation) on earth.