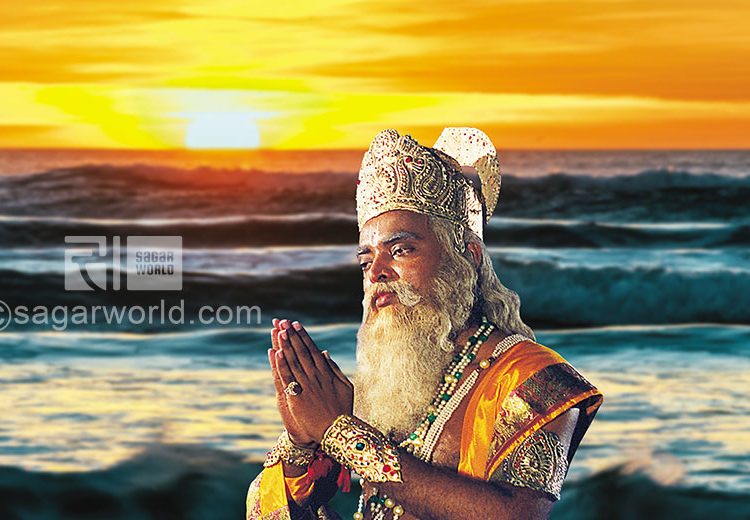 According to the Vedas, Varun is said to be the supreme protector of the laws of creation. He warns against sin, and creates disease to punish. He is considered to be the most merciful God.Varun was one of the most important of the Vedic gods. In pre-Vedic times, he was the supreme Lord of the cosmos, the keeper of divine order, the bringer of rain, the enforcer of contracts.

He is called omnipotent and omniscient; he is responsible for the Sun moving across the sky, for day and night to stay separate, and for the earth to keep its form; he watches the flight of every bird, is present at every gathering, and knows every thought.

Varun is believed to be one of the life-bearing elements of the universe. Out of five elements namely- earth, water, fire, air and ether, water is said to be the image of Varun. In this sense, he is known as the God of Life. He is also said to be Lord of the Waters, destroyer of the demons and protector of the devtas (deities).Varun’s empire is so vast that even Swarg (heaven), which is considered to be huge, is very small compared to it.

Varun is worshipped by saying that Varun is one of the twelve Adityas (Son) who shines with fourteen hundred rays in the month of Aashadh (ninth month of the Hindu calendar).In the Vedas, Mitra and Varun are considered to be the Kings of the entire universe. At the same time, according to the ancient beliefs, Varun is the God who regulates the Kaal-Chakra (wheel of time).

According to the Kaal-Chakra, whenever the universe is to be destroyed and after the destruction, a new universe created, then Pralaya (deluge) happens. Pralayas (deluges) are supposed to be of many types in which ‘water-deluge’ is considered to be the chief deluge. According to the ancient stories, after the water deluge, Manu, the first progenitor of man-kind, was saved, and he emerged as the first man of the new human civilization.

Varun is the principal of the essence of mercy, and the noose is his weapon. Varun had given this very sharp weapon, to Arjun. Varun is rarely depicted in images or paintings, but when it is done he is always in the erect posture of perfection, the Atibhanga posture, with a noose in his hand.

He rides a Makara, a fabulous animal with the head and front legs of an antelope and the body and tail of a fish. Best of all, he is supposed to live in a house with a thousand doors, as he is always accessible to man. Once, Varun kidnapped Som’s daughter. When Saint Uchhathya absorbed all the water, Varun had to return her. Saint Vandi, the president of King Janak’s assembly was the son of Varun.