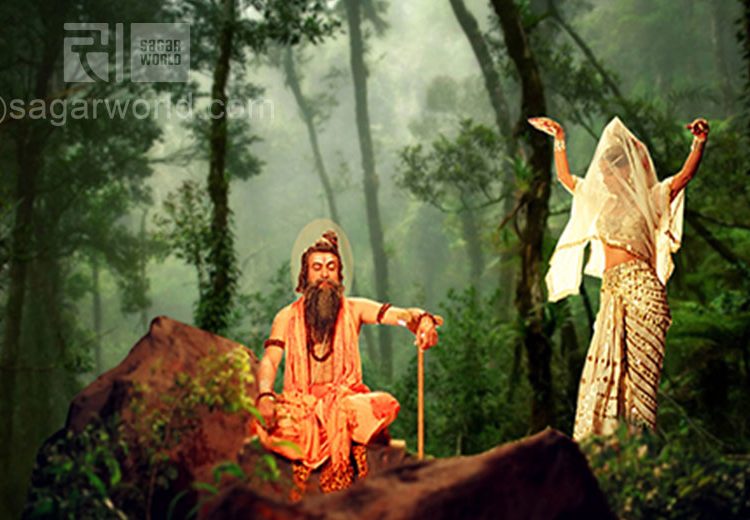 Rishi (Sage) Vishwamitra was an immensely enlightened, brilliant sage. Ram was educated and trained by his Guru Vashishtha, but it was Vishwamitra who bestowed on him celestial arms and weapons that never missed their mark.With his deep meditation and prowess, he was elevated from a Rajrishi (King-Sage) to a Brahmarishi (True-Sage).His hermitage was in the Himalayas on the banks of the Kaushiki River. In fact Kaushiki was Vishwamitra’s elder sister who became a river. To stay close to her, he set up his ashram on the banks.

Before he became a sage, Vishwamitra was a powerful king. He was the grandson of Kushnath and the son of King Gathi. Being born in the Kush clan, he was called Kaushik. He had a hundred sons as valiant as him and he ruled over the earth as the sole monarch.

One day, he went hunting in the forest with his army. He saw a very lovely peaceful ashram there, which belonged to Rishi Vashishtha. King Vishwamitra went there and introduced himself. Vashishtha insisted that the king and his entourage should rest in the ashram for the night. The army set up camp nearby. Vashishtha possessed a miraculous cow Nandini, the offspring of Kamdhenu (the wish-fulfilling cow).

Whatever wish was made to Nandini she granted it at once. With the help of Nandini, Sage Vashishtha arranged for all possible comforts and requirements of King Vishwamitra and his army.Vishwamitra was astonished at the lavish hospitality, for even he did not possess such fabulous things in his palace. He discovered that all those things were conjured up by the cow Nandini.

Now Vishwamitra wanted the cow for himself and tried to persuade Vashishtha to part with her. However, Sage Vashishtha explained to him that Nandini was not an ordinary object that could be given away. She was a venerated member of the ashram, like a Goddess. But Vishwamitra was not convinced. He tried to take away Nandini by force. But she created an army of hundreds of soldiers who attacked Vishwamitra and his men.

Filled with rage and revenge, Vishwamitra gathered his hundred sons and attacked the ashram. All Vashishtha did to quell them is pick up his wooden staff and the entire army was turned to stone. The hundred sons of Vishwamitra and his army were all killed.

It was then that Vishwamitra realised that the radiant power of the learned Brahmin is far superior to the physical prowess of the Kshatriya (warrior caste) warrior. He decided at once to renounce his warrior caste, and undertook a long and arduous penance to achieve Brahmatej (brahminical radiance).

So strong was his aura due to his penance, that soon the three worlds began to glow with the radiance that emanated from him. But yet Brahmarishi (True-Sage) Vashishtha considered him a Rajrishi (King-Sage). Burning with envy, Vishwamitra killed all seven sons of Vashishtha, but yet the sage was unmoved and considered this as a part of his destiny.

Once King Trishanku was sent away by Sage Vashishtha and sought refuge with Vishwamitra. Using his strong celestial powers, Vishwamitra sent him flying to the heavens in his earthly body, but the gods of heavens hurled him back down. Vishwamitra then used his power to keep Trishanku suspended there in mid-air between the earth and heaven. His fame now reached all over and his might was acknowledged by many. But yet Vashishtha considered him a Rajrishi (King-Sage).

Enraged, Vishwamitra stormed over to Vashishtha’s ashram in order to slay him. It was nighttime, and he overheard a conversation between the sage and his wife, Arundhati. She asked him why the moon looked brighter today.

Vashishtha said, “My dear, that is not the moon, it is the radiance that emanates from Vishwamitra’s halo.”When he overheard this, Vishwamitra felt ashamed of his intentions. “Here I am, eager to kill him and there he is, singing praises of me”. He  ran to Vashistha and fell on his knees, prostrating before him.

Sage Vashishtha embraced him and said, “Now that you are free of pride and vanity, you have become a Brahmarishi (True-Sage)”. Even Lord Brahma pronounced him to be a Brahmarishi. Once Vishwamitra left the bank of Kaushiki and went to the land of Kurush, where he set up his hermitage near Siddhashram, to conduct a major yagna. As a condition of the immense sacrifice he had undertaken, he took a vow of non-violence.

In that forest, dwelt the rakhasni (Demoness) Tadaka who created havoc and mayhem all around her. Along with her sons Subahu and Mareech, she would interfere with the religious rites of the sacrifice, and pollute it by throwing impure substances into the holy fire. Having taken the vow of non-violence, sage Vishwamitra could not get angry with them nor curse them.

He went to King Dashrath and asked him to send the two princes, Ram and Lakshman to help him fight the demons. He knew that Ram was an avatar (incarnation) of Vishnu. At first, Dashrath was reluctant to send his sons, but Sage Vashishtha persuaded him to let them go. On the way, Vishwamitra gave them the secret of the weapons Baal and Sabula. Ram killed Tadaka and Subahu, and sent Mareech far away. On being told to do so, he blessed and released Ahilya from her curse of having become a stone.

Along with Ram and Lakshman, Vishwamitra went to Janakpuri, where the bow sacrifice was being held for the Swayamvar of Sita. It was the mighty bow of Shiva, which could not be moved by even many strong warriors like Ravan and Banasur.Yet Ram, with the blessings and permission of Vishwamitra, picked it up with ease and broke it into two pieces. Sita placed the jaymala (victorious garland) around his neck, signifying he was her choice of groom.

In consultation with Vishwamitra, King Janak arranged for his other daughter Urmila to be married to Lakshman, and Bharat and Shatrughna were married to Mandavi and Shrutkirti, the daughters of Janak’s brother, Kushadhvaja. it was the intense devotion and brilliance of his intellect that led Shri Ram to become his disciple.

In fact, it is believed that among the seven Rishi’s who rule over the constellation Saptarishi in Hindu astrological reckoning (known as Great Bear in western astronomy) one of the presiding Rishi’s is Vishwamitra. Hence, Vishwamitra continues to influence all lives to this day.