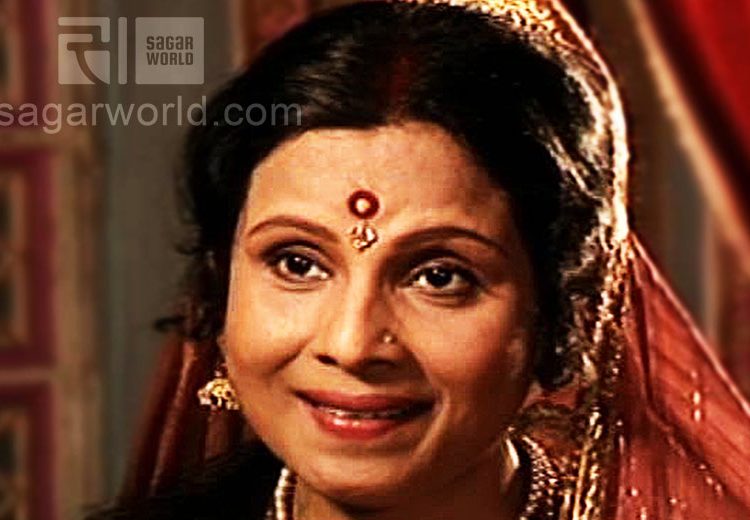 Kaushalya was the first queen of King Dashratha, ruler of Ayodhya. She was a princess from the land of Kaushal. Maryada Purushottam Ram was born as her son. Kaushalya was sweet-natured, devout, and devoted to her husband. Kaikeyi and Sumitra were her co-queens.

When Ravan realized that his end was ordained at the hands of a son of Dashratha, he undertook severe penance. Pleased with him, Lord Brahma granted him a boon.  Ravan asked for a boon that Dashratha’s sperm should not yield any progeny. “So be it”, said Brahma. But Ravan’s suspicions were not assuaged.

He came to know that the princess of Kaushal would beget a son who would kill him. She was to wed Dashratha five days later.

To prove Brahma wrong, Ravan kidnapped Kaushalya, the princess of Kaushal. He put her in a manjusha (a trunk) and entrusted it to the care of a sea-dwelling whale. “When I return, you must give this manjusha (trunk) back to me”, said Ravan. “Do not give it to anyone but me.” With this warnin

g to the whale, he returned to Lanka.But he underestimated the divine power of Brahma’s all-seeing eye! Brahma then assumed the form of Ravan and asked the whale for the manjusha (trunk). Meanwhile, King Dashratha was out hunting with his minister Sumantra.

Ravan caused them to collapse unconscious, and then left them on a deserted island. Just as they were making their way back, Brahma caused the manjusha (trunk) to be placed before them.

When Sumantra saw the trunk floating in front of their eyes, he opened the lid. He was shocked to see a lovely young damsel inside. “Who are you and what are you doing in these deserted parts?” he asked her.Princess of Kaushal She said and She did not know how she had gotten inside the trunk. Dashratha was quite taken by the sweetly-spoken young girl. His minister arranged to have the two married according to the Gandharva (celestial) rites of wedding.

Meanwhile, her sudden disappearance from Kaushal country had caused great consternation. Sumantra went to Kaushal and narrated all the events. The king of Kaushal was happy to learn that his daughter had been married to the illustrious Dashratha, ruler of Ayodhya.He had no son of his own, so he bequeathed his entire kingdom of Kaushal to Dashratha as her dowry, and Dashratha earned the title Kaushalya.

After five days, Ravan went to the whale and asked for the trunk. “But I gave it to you already!”, declared the whale. At that moment, Lord Brahma appeared. “You Ravan! You wanted to prove my prophecy wrong, did you? Now see what I am capable of doing! Kaushalya is the Queen of Ayodhya, as I have decreed.” Ravan crept away, shamefaced.

In another life, Kaushalya was the queen of Manu, the self-generated, and her name was Shatrupa. They both prayed to Lord Vishnu long and hard, and asked for the boon of a son as virtuous and mighty as him. It was then that Lord Vishnu blessed them and declared. “In the Tretayuga, I will be born to you as your son.”

Thus Manu and Shatrupa were reborn in Tretayuga as Dashratha and Kaushalya. They had reached middle age, yet they had not yet been blessed with a child. On consultation with Guru Vashishtha, King Dashratha appointed Sage Shringi to perform the Putreshti Yagna (a special sacrifice to obtain a son).

Agnidev (the lord of fire) appeared with a bowl of Kheer (a kind of milk pudding), and the Kheer was distributed to the three queens. In due course Ram was born to Kaushalya, Bharat to Kaikeyi,and Lakshmana and Shatrughna to Sumitra. Ram was an incarnation of Lord Vishnu and the other three brothers were also partial incarnations of the divine source.

When, due to Kaikeyi’s boon, Ram was banished to the forest for 14 years, and Bharat was to be crowned king instead, Kaushalya readily allowed Ram to leave. She said, obeying your mother (Kaikeyi) and respecting her wishes is your prime duty.

Kevat – the ferryman who take god across the river