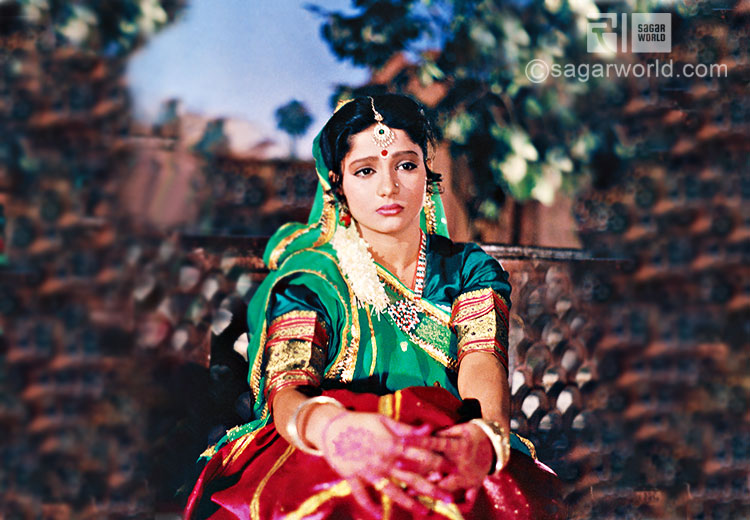 When the King was cleaning the space of the sacrifice(yagya), he found Radha in the form of Bhoomiputri (daughter of mother earth).

The king nurtured her as his own daughter. There is one more story said about the birth of Radha according to which when Lord Vishnu was to incarnate as Krishna, he asked all the deities and goddesses of his family to incarnate on the earth.

Then, Lord Vishnu’s consort and the one who was residing in the Vaikunthlok, Laxmi incarnated on the earth as Radha.

There are many different ancient stories said about the birth of Radha but the one that is unanimously accepted is that Radha was the daughter of Vrishbhanu who was king Suchandra in his previous life.

Suchandra and his wife had acquired a boon from Brahmaji that in the Dwapar age Shri Laxmi will be born as a daughter to them in the form of Radha. King Suchendra and Queen Kalavati only were reborn as Vrishbhanu and Kirtikumari and Laxmiji was incarnated as Radha.

It is said that at the time of Radha’s birth, Devarshi Narad himself went and met Vrishbhanu and informed him, “This girl’s beauty and nature is divine.

All the houses, wherever her footprints are there, Lord Narayan with all other deities will reside there.

You nurture this girl thinking her to be a Goddess.” According to Naradji’s advice, Vrishbhanu nurtured Radha with great love and care.

Nandbaba who lived in the nearby village was friends with Vrishbanu. Once during the holi festival; Vrishbhanu went to Gokul to meet Nandrai.

There only at Nandrai and Yashoda’s house Krishna (who was growing up as their son) met Radha. Their union was divine, phenomenal and incessant. This meeting was Radha and Krishna’s first meeting which became eternal.

Radha’s love relation towards Krishna in the terrestrial or customary meaning is not just the relation between a man and woman. The feeling of this love is divine and phenomenal which gives this love a pious form.

The holiness of this love is because of love and devotion towards each other. The philosophical side of this reduces the distance of the support and supportive, also the difference between the worshipper and worshipful is not there. Krishna is the life of Vraj Radha is the soul of Krishna.

That is why, it is said, “Atma Tu Radhika Tasya”. One form of Radha is, she is a devotee, worshipper of Krishna and in the second form she is the worshipful, devoted by Krishna.

‘Aradhyate Asau itii Radha.’ Radha – Krishna’s love is the symbol of the feeling of being united. When two souls are united, the difference of the other or the second vanishes.

The image of two souls uniting concludes in the ‘Maharaas’ (group dance of Gopis around Krishna where every Gopi felt that Krishna was dancing with them), Shri Krishna is engrossed in Gopis. ‘Maharaas’ is the form of love and devotion. It is praised by saying ‘Raso Vai Saha’.

There is no place for pleasure here, but only sacrifice and duty is the prime motive. That is why this divine love is believed to be Pancham Purusharth which is above duty (dharma), money (Arth), pleasure (Kaam) and salvation (Moksha). Hence Vrindavan is called the land of Pancham Purusharth.

This Pancham Purusharth (energy) in the philosophical form is said to be ‘Power’. Radha is the backbone of omnipotent Krishna’s energy.

The energy form of Radha runs this universe in different forms for performing different actions. Some times Kali, sometimes Durga, Laxmi, Saraswati etc. are believed to be different forms of Radha.

In this extensive meaning, Radha becomes the inspiration of life and supporting rock of Indian culture. In Brahmavaivart’s Puran’s “Krishna Kand”, Radha has been praised by the God himself as the live symbol of power and energy. She is Krishna’s Shakti or power.

After going to Mathura from Gokul, Krishna did not forget Radha and even Radha did not fade out. Radha knew that to kill an oppressor like Kans, Krishna has to go to Mathura.

This was his duty and Radha did not want to hinder his path of duty. This is the best form of sacrifice which Radha accepts in separation of Krishna.

After Shri Krishna went to Mathura, Radha and Krishna did not meet for years. It is said that both of them had met at Kurukshetra where during the time of solar eclipse, Krishna had come from Dwarika and Nandrai, ‘Yashoda, Vrishbhanu and Radha had come from Vrindavan.