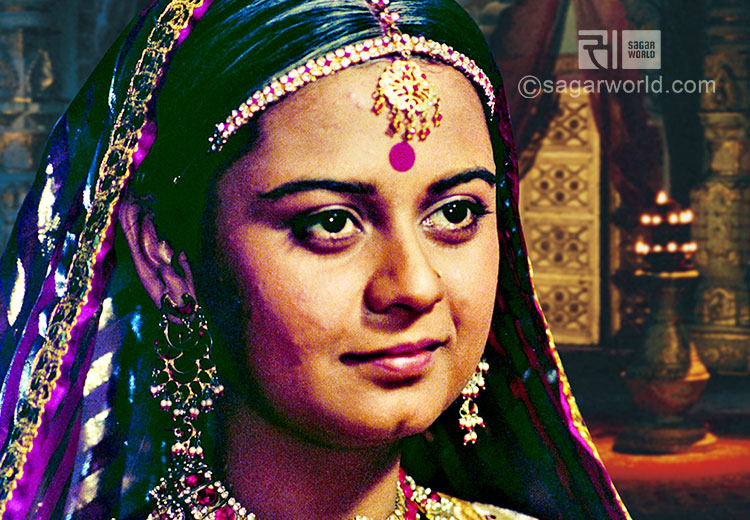 Devaki was the daughter of Devaka, the younger brother of King Ugrasen of Mathura. She was the mother of Shri Krishna.

She was a partial incarnation of Aditi, the mother of the Devas. Devaki was married to Yaduvanshi Vasudev.

Devaki’s brother Kans was an oppressor and enemy of the deities.

He had pompously got Devaki married. After the marriage, Kans happily became the charioteer to see off Devaki.

Just then, there was an Akashvani (divine utterance), “Kans, the one whom you are happily seeing off, her eighth child will kill you.”

Kans was very scared of this and wanted to kill Devaki. Vasudev pleaded him not to kill Devaki and promised Kans that he would hand over his children to Kans.

When Devaki gave birth to her first child, as per his promise, Vasudev handed over the child to Kans. Kans was hesitant to kill the child as he had the threat from the eighth child and not the first child.

But Devarshi Narad instigated Kans and with his instigation Kans killed seven children and waited for the eighth child to be born so that as soon as the child is born, he can kill him.

Devaki gave birth to Krishna in the form of her eighth child. Miraculously, the guards of the prison went off to sleep, the gates of the prison opened up and Vasudev was able to come out of the prison.

He reached the banks of the River Yamuna and crossed it, reached Gokul and left the child with his friend Nandrai’s wife Yashoda. Yashoda had also given birth to a daughter the same night.

Vasudev picked up that girl child, returned to the prison in Mathura and kept her next to Devaki. With the effect of Yogmaya, the gates of the prison closed once again.

When Kans came to know that in the form of eighth child, Devaki has given birth to a daughter, he snatched the child and wanted to knock her on the rock

but the girl (who was a form of Yogmaya) slipped from his hand and flew off in the sky and while going said, “Kans, the one who is to kill you is already born and is safe.”

Kans got very scared with this and ordered to kill all the children that were born in the state.

On the information given by his spies, Kans doubted that Krishna who was born at Nandrai’s place could be Devaki’s eighth child.

So he sent giantess Putna and demons like Bakasur and Adhasur to kill Krishna. But all of them were killed by Krishna.

Devaki’s son Shri Krishna grew up in Gokul. Nand and Yashoda nurtured him and educated him by Sage Sandipani. Krishna killed Kaliya snake in his childhood.

While in Gokul, his divine love relation with

Radha grew up and a divine, pure relation with gopi’s was established. All these years,

Devaki refrained from showering her love to her son Krishna. Young Krishna, for performing his duties sacrificed Nand and Yashoda’s parental affection, Radha’s love, came to Mathura and killed the oppressor Kans.

Devaki got the happiness of meeting her son only after Kans was killed. After leaving Mathura, Krishna built Dwarika and settled there. Even Devaki and Vasudev settled there.

Shri Krishna dedicated his life to serve them. After Krishna left for heavenly abode, even Devaki and Vasudev died.

Devaki’s character is that of an ideal mother who sacrificed her affection for her duties and will always be remembered in the history of Indian culture.

Devmata Aditi – mother of the Gods