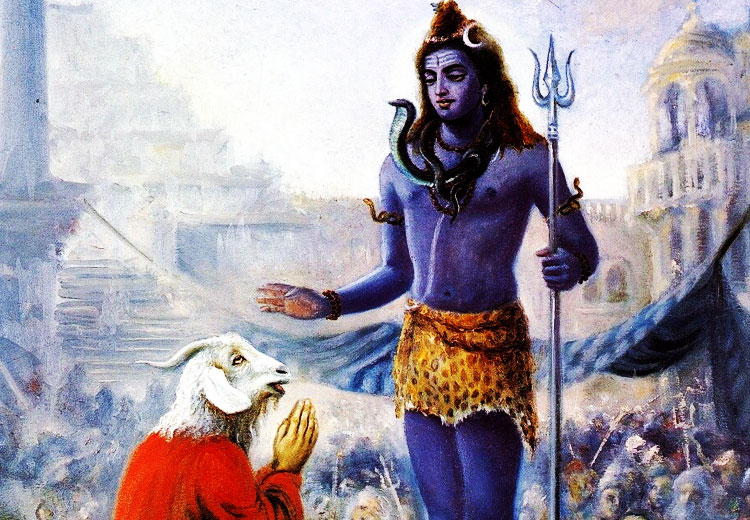 It is believed that according to Mahabharata, the Prajapatis came into being from Brahma’s thumb. According to the Vedic belief, God Prajapati was one of the Gods who were handed over the work to develop the universe.

Prajapati is believed to be the original form of God by which few other Gods were born.

Brahma’s first nine creations for the purpose of populating the world are called Prajapatis. Prasuti was married to Daksha Prajapati.

Of the ten daughters of Daksha and Prasuti, Sati was married to Shiva. Shiva always applied ash on his body, with snake coiled around his neck and wore a garland of skull (mundmala).

Daksha always remained unpleased with this peculiar dressing of Shiva. Daksha had once organised Yagya (sacrifice).

He invited family and friends for the yagya but did not invite Shiva.

Shiva’s wife Sati went for the Yagya without any invitation.

Here she saw, a place was kept in the Yagya for every God except Shiva. She could not bear the insult of her husband and so gave away her life by jumping in the fire of Yagya.

Upon hearing the news of his beloved wife’s death, Shiva was infuriated that Daksha could so callously cause the harm of his (Daksha’s) own daughter in so ignoble a manner.

Shiva grabbed a lock of his matted hair and dashed it to the ground. From the two pieces rose the ferocious Virabhadra and the terrible Rudrakali, while Bhadrakali arose from the wrath of Devi herself.

Upon Shiva’s orders they stormed the ceremony and killed Daksha as well as many of the guests.

Terrified and with remorse the others propitiated Lord Shiva and begged his mercy to restore Daksha’s life and to allow the sacrifice to be completed.

Shiva, the all-merciful One, restored Daksha’s life, with the head of a goat.

In his humility and repentance for his graceless and sinful acts, Daksha became one of Shiva’s most devoted, attendants.

Shiva, with the dead body of Sati roamed around the world like a haughty.

On seeing the condition of Shiva, other Gods got worried.

Then, Lord Vishnu with the help of his Sudarshan Chakra(a divine wheel), cut Sati’s dead body into pieces and dropped them one by one, so that Shiva gets  released  off this weight and returns to being normal.

There were fifty one pieces of the dead body of Sati cut by Lord Vishnu and the places on the earth where they fell are known as Shaktipeeth.

Sati, later incarnated as Parvati in her next life, and remarried Shiva, henceforth never to part with him again.

It is for this reason that Shiva, while monogamous, has had two wives in reality, but the same soul in two incarnations.

Ketu - the southern node of the Moon