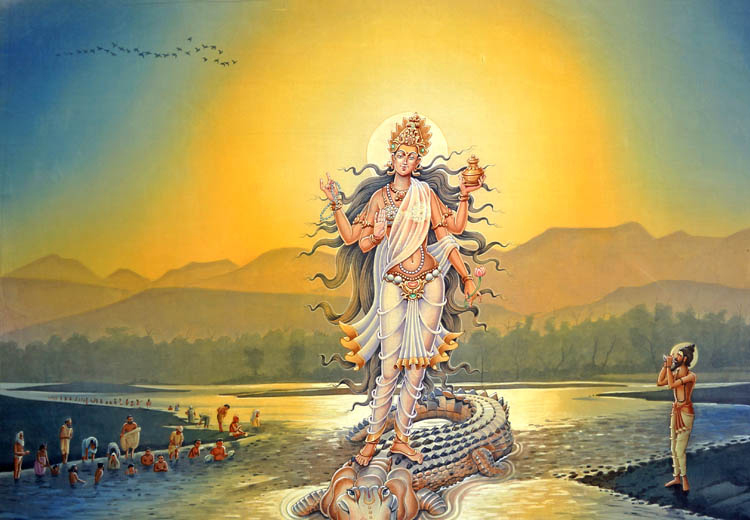 Ganga is a divine river goddess who was born from the holy water from the kamandalu (pot) of Hindu God Brahma when he washed the feet of Vaman, the incarnation of Hindu God Vishnu. She was brought to earth from Brahmaloka (abode of Brahma) by Bhagirath. River Ganga is considered sacred by Hindus. It is believed that when people take a dip into Ganga, they wash away all their sins. It rises in the Himalayas and through the northern India, it flows to eastern India and discharges into Bay of Bengal.

She is depicted as four-armed, holding rosary, lotus, Kalash (pot) and riding on a Gharial (Himalayan crocodile).Goddess Ganga is described as the ‘best of rivers, born of all the sacred waters’. Her mother is Mena and her father is Himavat, the personification of the Himalaya mountains. She is also known as Jahnavi, Vishnupadi, PatitPavani, Tripathgamini and by various other names.

While there are many stories regarding the birth and life of the Goddess Ganga, one main story of her birth relates to the story of the dwarf Vamana, the fifth incarnation of Lord Vishnu. Bali, the king of asuras was extremely prideful and arrogant. In a plan to end his pride, Vamana went to Bali and asked him for three steps of land. Bali arrogantly agreed, thinking it only to be the three small steps of a dwarf. However, Vamana then took on his huge cosmic form and placed one foot on the earth, one foot in the heavens, and one foot on Bali’s head.

According to the story, it was during this time when Lord Vishnu took a step into heaven that the Goddess Ganga was born. When he stepped into heaven, Lord Brahma reverently washed Vishnu’s feet. The water fell from Vishnu’s feet into Brahma’s kamandalu, or pot, and out of this water Ganga was born. Hence, Goddess Ganga is also known as Vishnupadi.

The descent of Goddess Ganga to earth relates to the story of King Sagara and his descendent Bhagirath. King Sagara had sixty thousand sons. Once, King Sagara decided to perform the Ashvamedha ceremony, a ritual in which a horse is sent all over the land to conquer and acquire new kingdoms and establish sovereignty.

Believing Kapila to be the thief, they began to hurl insults at the great sage, thus disturbing his practices. Kapila opened his eyes, the eyes which had not been opened for years, and by his spiritual power burned all sixty thousand sons to ashes.

Upon death, there are many long and intricate rituals that must be performed for the Hindu, including the immersion of ashes. However, as these sixty thousand sons were deep in the underworld, no one was able to perform their funeral rites, so they wandered as ghosts for years.For generations, the descendants of King Sagara tried, unsuccessfully, to please Goddess Ganga into coming onto Earth to purify the sixty thousand sons of King Sagara.

Years later, a descendant of King Sagara by the name of Bhagiratha vowed to do intense penance in order to bring Goddess Ganga herself down from the heavens to purify the ashes of his ancestors, thus washing away their sins and freeing their souls. After much penance, Lord Brahma agreed to Bhagiratha’s wishes and asked  Goddess Ganga to flow down to the earth.

As, she began her descent, she swept away everything in her path. Bhagiratha prayed to Lord Shiva to stop Ganga from doing so, as he was the only one strong enough to stop her flow. Thus, as Ganga fell from the heavens, she was caught in the locks of Shiva’s hair. Ganga was sanctified through the touch of Shiva and was released in calm streams from his hair to flow both on the earth and into the underworld, to purify and release not only the ancestors of Bhagiratha but all inhabitants of the earth.

Ganga also plays a role in many other Hindu stories. In the Ramayana, Lord Rama and his wife Sita perform tapasya along her banks. In the Mahabharata, Ganga is the wife of Shantanu as well as the mother of the eight Vasus, including Bhishma.[Ganga and Shantanu were cursed by Lord Brahma to be born on Earth. Shantanu met Ganga on the banks of the Ganges and asked her to marry him. She accepted the proposal on the condition that Shantanu would not question any of her actions.

Shantanu agreed and they married. They lived together peacefully and had eight sons who were the incarnation of the eight Vasus. They too had been cursed and had asked Ganga to end their life when they were born to her on Earth. Due to their request, Ganga began drowning each son upon birth while Shantanu watched without questioning. However, when she was about to drown their eighth son, Bhishma, Shantanu stopped her. Ganga leaves with Bhishma but later gives him back to Shantanu when he is sixteen years old.

According to the SkandaPurana, the goddess Ganga is foster-mother to Kartikeya or Kartika, Subrahmanya, Murugan, who was actually a son of Shiva and Parvati. In Shiva Puran, Kartikeya is also called as Kumara, the son of Ganga. Parvati is said to have created an image of Ganesha out of her sacred impurities which became endowed with life after immersion in the sacred waters of the Ganga. Therefore, Ganesha is said to have two mothers—Parvati and Ganga and hence is called Dvaimatura and also Gangeya, the son of Ganga.

Since time immemorial, hundreds of millions of people have depended on the Ganga for their daily needs. It has immense environmental, economic, and cultural significance, and the towns and cities on its banks have benefitted immensely from it. It flows through many cities of India. The Ganga River passes through Uttarakhand, Uttar Pradesh, Bihar, West Bengal, and Jharkhand. Consequently, it passes through many cities in these states. Some major cities are Haridwar, Varanasi, Rishikesh, Kanpur, Jajmau, Allahabad, Mirzapur, Ghazipur, Patna, Bhagalpur, Baharampur, Kolkata, Bhagalpur, etc.

The River Ganga has a great spiritual and symbolic significance in Hinduism. It is undoubtedly the most sacred river of Hindus. Millions of Hindus take a dip in its water to wash away their sins.

Ganga is the liberating supreme consciousness or pure chitshakti (pure consciousness infused with the power to cleanse the mind and body and transform it into a vehicle of light and delight). She descends from heaven only at the behest of God to liberate the beings from the cycle of births and deaths. When people come into contact with it, they become instantly purified and enlightened.Thus, the descent of Ganga is an allegory about the liberation of the soul from the sins, suffering, and limitations of mortal life, and about the descent of higher knowledge or the knowledge of Brahman (brahmavidya) into the mind and body through the austerities, penance, and spiritual practices of their occupant, Bhagiratha, or the embodied Self.

Benefits of having Goddess Ganga Painting

Renowned as a devoted daughter, a caring mother, a passionate lover, and a merciful saviour, she is here to absorb and absolve us of our sins. She has the power to save us all and bestow the precious gift of moksha, embracing saints and sinners alike with her all-encompassing compassion.

Pieter Weltevrede- is a Master “Sacred-Artist” based out of the Nederlands. After a many years of guidance, under his guru Late Harish Johari a successful author, a gifted painter and sculptor, a lifetime scholar, an inspiring teacher, a splendid cook, an ayurvedic massage miracle, etc., Pieter embarked on his own journey amalgamating ancient Indian knowledge with his own western sensibilities evolving an art form that appeals to todays international audience. He has been practising his art form from the last 40 years now.

Here, the paintings are printed on coated matt paper by inkjet printer, using ultra chrome inks with an off-white paper mounting with golden border, and encased inside a fibre frame with acrylic sheet cover in the front