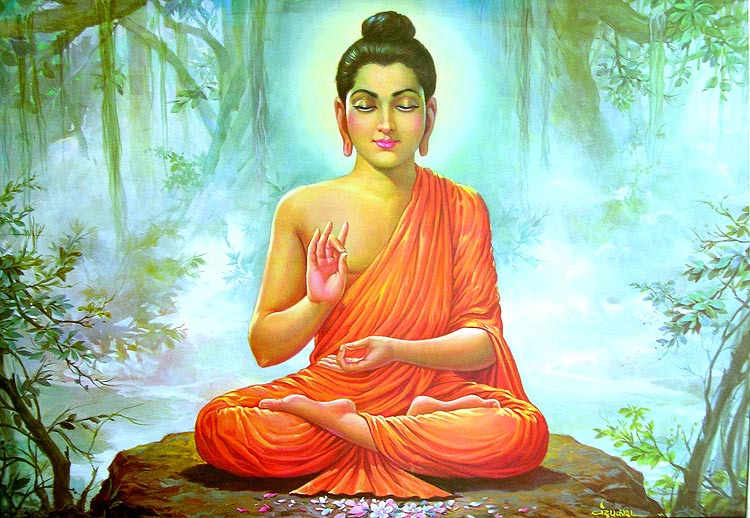 There was a time for believers of Vedic religion when wicked people, to fulfill their bad wishes had started taking wrong meaning of Vedas and this way started telling people that sacrifice of human being, animal, consuming alcohol and lustful desires are a form of Vedic religion.

Lord Vishnu reincarnated on this earth. This incarnation of Lord Vishnu was Gautam Buddha who is also known in the names of Bhagwan Buddh, Tathagat, Bodhisatva, Siddharth and Shakyamuni.

Bhagwan Buddh was born in 563 BC at Lumbini (Kapilvastu) which is at present in Nepal. His father Maharaj Suddhodhan was the King of Kapilvastu. His mother’s name was Maharani Mayavati. His parents had named him Siddharth and his family name was “Gautam”. Further, he became famous in the name of Gautam Buddha. The meaning of Buddh is one who got knowledge or the one who got the divine light. 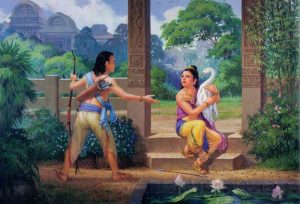 Since childhood, Prince Siddharth was full of mercy. In spite of a royal upbringing and education, he was of ascetic nature and used to get upset with every small incident that happened around him wherein there was even a little pain. He was merciful towards every living thing. He used to be in pain on seeing a horse perspiring in race and would immediately stop in the race. While hunting, he would keep back the arrow in quiver thinking that what an animal had done wrong for him to take away his life. Once, Prince Siddharth was playing in garden with his cousin brother. Just then his cousin shot an arrow at a flying swan and the injured Swan fell down on ground. Seeing this condition of Swan, tears rolled down off Siddharth’s eyes. He took the Swan in his hands, treated him and saved his life. 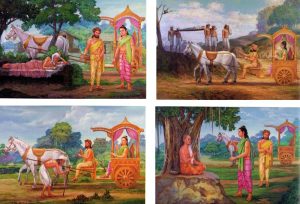 When Prince Siddharth grew up, King Suddhodhan got him married to Princess Yashodhara. A baby boy was born to Yashodhara whom they named Rahul.In spite of living a householder’s life and living a royal life, Siddharth’s asceticism did not lessen. It is said that people had said about him that the prince would become an ascetic after seeing old, sick, dead and saintly people. His father tried his best to tie him up in terrestrial life but coincidentally all these four scenes kept coming in front of Prince Siddharth and a feeling of complete asceticism developed in his mind. He understood that this world is destructible, fake and everything here is destructible. Affection for this world was futile. 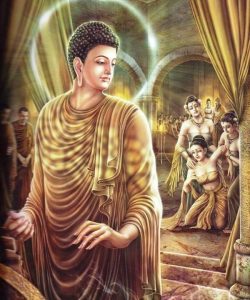 With this mindset, Prince once left the palace in search of knowledge. Just as he reached little far, his heart felt for his son and he returned to palace, saw his son, kissed him and shedding all affection, once again set out to gain knowledge.

After leaving his house, Gautam learnt from Brahmins, all the four Vedas and six Shastras. Then he started strong penance and attained Truth. With this, he got immense peace which he named “Nirvan”. That time, Buddh was 35 years old. The peepal tree under which Shri Buddh attained Truth, is known as “Bodhi-vriksh” which means the tree of knowledge.

After attaining Truth, Gautam Buddh started spreading his knowledge everywhere. Within his disciples, he promoted four “Arya Satyas” and also preached “Arya Ashtanmarg” following which was inevitable for all his followers. The four “Arya Satya” (noble truths) and “Arya Ashtangmarg” (eight fold path) are as follows:

1) The world is full of sorrows.

2) The cause of sorrow is desire.

3)  If desires are conquered all sorrows can be removed.

4)  The only way this can be done is by following right-fold path.

The steps of eight-fold Path are:

Just as Buddh’s theory became popular, it took a form of Buddhist religion. The base of all the preaching of Buddha on truth, non-violence and love were Vedas. That time, he opposed Vedas because at that time, the demonic natured Brahmins were harassing people by taking out the wrong meaning of Vedas but whatever theory Buddh established was actually the real meaning of Vedas. In true sense he put forward the original meaning of Vedas in the form of his thoughts and established a true and pious religion. All of his principles were based on Vedic principles. Since people were sad as the original principles of Vedas had vanished, they felt blessed with the Buddhist religion. This was the reason, people in huge numbers became the followers of Buddh and Buddhist religion started becoming famous in world. Making people happy with his presence, establishing truth, non violence and love in the society and impressing everyone right from a layman to King and making them his followers, Lord Buddh lived on to this earth for eighty years. At the age of eighty, at a place named Kushinagar, Gautam Buddh left for heavenly abode.

After his death, the local people took out a grand procession and ceremoniously completed his funeral rites. Wherever his followers resided, everyone asked for the ashes of his body to keep him alive in their memories. As a result, the ash of his body was divided in eight parts and at various places in the country, and his monuments were built at those places.