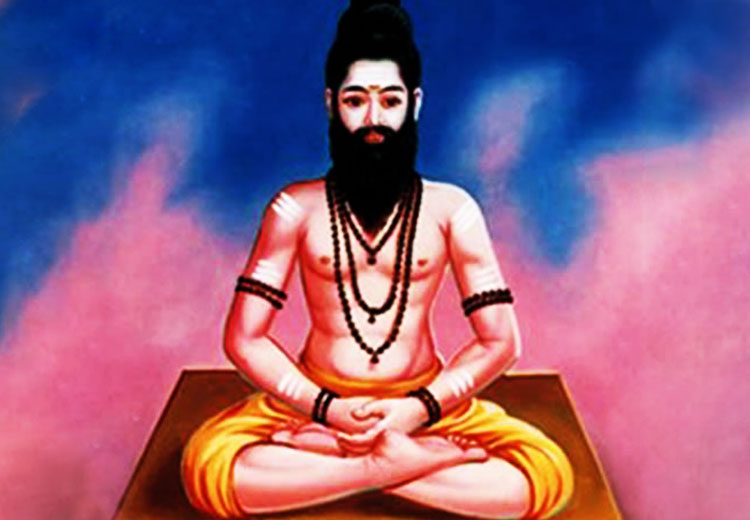 Shri Thirumoolar was one of the Sanatan tradition Yogis with super natural powers who was capable of transforming his body anytime and anywhere according to his wish. With his minuscule body he could remain present anywhere according to his wish. He could fly in the sky, the one who had control over life and death, it could not be said about him as to his body which was highly spiritualized with yoga, how many thousand years old it was.

It is believed that the original name of Shri Thirumoolar was Rishi Sundarnath. He was a soul free of life and was not born for his karma but to show the right path to human beings that were wandering due to ignorance.

While living in the Himalayas, he wished to meet Rishi Agastya who was living in South India at that time. So, with the permission of his Guru, he set out for South India. On the way, he visited pilgrim sites like Kedarnath, Pashupatinath (Nepal), Kashi, Kanchi etc. He then went to Chidambaram where he had a darshan of Lord Natraj. Going further, he reached Tiruvavaduturai. There, after visiting a temple somehow, he had a strange feeling of not going further but then also, after waiting for sometime in the temple, he went further against his wish. Further, on the way while passing by the banks of river Kaveri, he heard a voice of cows crying. He stopped and saw that the cowherd was lying dead and all the cows were standing around his dead body and crying. With the tears falling down from the eyes of the cows, the body of the cowherd had become total wet. Seeing this, Rishi’s heart sympathized. Thinking of no other way to stop the cows crying, he thought of transferring to other body and so hanging his body on to a tree, with minuscule body, he entered the dead body of cowherd. The cowherd came back to life. Seeing this, all the cows were very happy and started licking their owner’s body. Rishi was very happy seeing the cows happy once again.

The name of the cowherd whose body Rishi had entered was Moolar. He was of Yadyar family and nurturing the cows was his livelihood. He was born in a village named Sathanoor on the banks of river Kaveri. When Rishi went to leave the cows at Moolar’s house, his wife was waiting for him. She did not know that Moolar had died while grazing the cows and she was worried as Moolar had not returned home till now. As soon as she saw Moolar coming with the cows she was very happy and came near him but Rishi in Moolar’s body stopped her saying, “Don’t touch me. It is a sin to touch another man. I am not your husband.” Saying this Rishi went away from there and went and sat in a nearby math (monastery). As soon as he sat, he went into contemplation and sat in same condition for long.

Seeing her husband leaving and going away to the Math, Moolar’s wife went behind following him but seeing Moolar in contemplation, she was surprised. After all, what was wrong with Moolar? Frightened, she gathered the villagers. The villagers saw that while in contemplation, a phenomenal light was coming out of Moolar’s body. He had no knowledge of outside world. They waited for a long time for Moolar to get out of contemplation, in the end, thinking that Moolar must be doing a drama to harass his wife; they returned back taking his wife along.

Then, thinking God’s wish as his own, Rishi started living there with the body of Moolar. As he lived in Mooalr’s body, he came to be known as Thirumoolar. The meaning of “Thiru” is pious which is used by the people of South India before the name of the people they respect and honor. Since Moolar had become a saint in the eyes of people, they started calling him Thirumoolar.

With the orders from God, Thirumoolar came to Tiruvavaduturai from Sathnor. Here, once again Moolar’s wife and other relatives came to him with a request to come home. Seeing the condition of Moolar’s wife and his relatives, he felt pity for them and he told them his real condition due to which they were disappointed and returned home.

After this, Shri Thirumoolar worshipped Lord Shiva and with his command, wrote Shaivagam Shastra in Tamil language. There are 3000 padas in this granth and it is also known as “Thirumandaram”. This is a great granth which holds a high place in the hearts of Tamil Shaiv devotees. After completion of his work, Shri Thirumoolar returned to Kailash.

Great scholars believe that Shri Thirumoolar lived with his physical body between 150 AD to 900 AD and some people believe that he was on this earth from 300 AD to 700 AD. As such, there is also a belief that Shri Thirumoolar continuously remained in contemplation and in the end of the year would open his eyes once and recite a four line pada. This way he had created 3000 padas in 3000 years.

Today, there are 3047 padas of available in “Thirumandiram”. Possibly, 47 padas must have been added later on.

Shri Thirumoolar is one of the 63 Nayanars and 18 Siddhas.