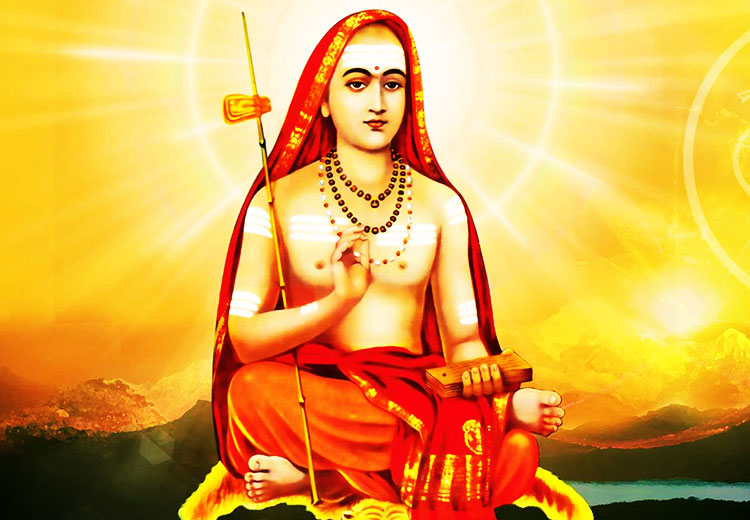 Shri Shankar was born, according to the current tradition, on Vaisakha sudha panchami (around May) in the village Kaladi near Ernakulam in Kerala.

His birth date varies from the 6th century BC to the 8th century AD. The traditional date is Kaliyuga 2593 or 509 BC. Proffessor Telang, however, on the basis of a reference to punna Vervan, in the “Bramh Sutra Bhasya” of Shankar, whom he (Telang) identifies with the Buddhist king of Magadh, holds that he must have lived in the sixth century AD. But modern orientalists like Max Mullar and others have somehow fixed it as 788 to 820 AD. Das Gupta and Radhakrishanan, the well-known writers on the history of Indian philosophy, have accepted and repeated it in their books.

Whatever may have been the exact date, it is the consensus of opinion that he lived after Bhagwan Buddha. He lived at a time when Vedic religion faced a critical situation brought about by quarrelling sects and by fanatics with unholy zeal and degrading practices.

Shri Shankar was born in a highly orthodox Nambudari Brahmin sect of Krsna-Yajur-Veda,Taittiriya sakha. His father was Shivguru and mother was Aryamba, both of whom were great devotees of Lord Shiva. They were childless and prayed for a son. Hence, they named their child after the name of Lord Shiva “Shankar.”

Shri Shankar displayed uncommon precocity from childhood itself. Hearing once, he could learn anything. Whatever he read he remembered, whatever he heard he never used to forget.

Listening from his father, He started chanting Ved Mantras when he was only two years old. He was three when his father passed away. At five his mother had his upanayan (sacred thread) ceremony conducted and sent him to Gurukul for initiation. He learnt the four Vedas and six shastras from the guru. It used to take 30-32 years for a student to complete his entire study, Shri Shankar completed his studies when he was only six.

In his gurukul days, he went for alms to a poor brahmini’s house. She was so poor that she could give only a dry amala as alms which she was going to eat as she was hungry for last few days. Deeply touched, Shri Shankar prayed to the Goddess Mahalakshmi and Devi Mahalakshmi which caused a shower of gold amalakas on the poor brahmini’s house. Her house was filled with gold. The eighteen verses of Shankar’s prayer to Mata Lakshmi go by the name “Kanakadhara stotram”

At the age of seven, Shri shankar left the house of the Guru and returned home.

Once his mother fainted on the way while she was going to take bath in river Purna which was at some distance from his house. After this incidence, Shri Shankar Prayed to the river. Pleased with his prayer, river Purna changed its course and was flowing through the neighbourhood of his home like another Ganga.

His fame reached the years of the king of the Kerala. The King offered him great honour and wealth but Shri Shankar completely refused it as he no interest in anything materialistic.

His mission was to establish the Vedic religion once again which was at its lowest ebb due to the supremacy of Buddhism. As it was a time of a complete cultural crisis. Shri Shankar’s great compassionate heart was filed with an intense urge to bring about a new state of things in the country. For the accomplishment of this task supreme self- sacrifice and dedication were necessary. So, Shri Shankar decided to renounce personal worldly considerations and dedicate himself fully to the upliftment of the country and its dharma.

He asked for Sanyas but his mother could not permit it as he was the only child she had. But one day the mother and the son went to a nearby river for a bath, suddenly a crocodile caught hold of his leg and was dragging Shri Shankar into deep waters. Shankar pleaded her mother to grant him permission to become a sanyasi before he passed away. Having no option mother permitted him and the miracle happened, the crocodile left his leg and disappeared.

After getting permission from his mother, Shri Shankar left Kaladi in search of his guru.

He was only 8 at that time.

Walking on foot, overcoming all the hindrances he came to Onkareshwar on the bank of river Narmada in Central India. There he found his Guru the Great Saint Shri Govindpad. Shri Govindpad formally initiated him into holy order of Vedic sanyas. Shri Shankar lived with his guru for about three years and learnt the spiritual truths and the disciplines under Govind Bhagvatpad. Shri Govinpad directed him to write a philosophical commentary on the Vedant Sutras known also as the Bramh Sutras, then interpreted in diverse theological way.

Taking leave of his preceptor, Shankar left the Narmada bank and in course of time reached Kashi. There he convinced every body with his philosophy.

During the stay at Kashi one morning Shankar found a chandal standing on his way to the Kashi Vishwanath temple. Shankar asked him to clear the path. But the outcast did not move and asked, “from which, do you want and, what, to go where? Do you want this body, which has been similarly built out of food? or do you want one living consciousness to go away from another? What do you say, oh! Learned Brahmin? Which do you want to differentiate; this body of matter or the living chaitanya?

Shri Shankar realised that the very purpose of all his teachings, that the self alone is the sole Reality, has been summarised by the chandal. Shankar immediately understood the Vedantik purport of the chandals question and also conjectured that the Lord himself had come in form of a chandal to test if Shankar has realised the truth that he had been teaching. He then uttered in reply, those immortal slokas, which go by name of “Manishapanchak”.

From Kashi he went to Badrikasharam where he spread his philosophy and wrote so many books. Then he travelled to North Kashi.

When he was sixteen years old, he met sage Vyas, who approved the writings of Shri Shakar and extended his life for 16 more years (as Shri Shankar’s life was only for sixteen years) so that Shri Shankar could spread the philosophy all over world.

And then Shri Vyas suggested him to meet Kumaril Bhatt.

Shri Shankar came to Prayag and met the great and learned Mimansa philospher Shri Kumaril Bhatt, who nearing his life’s end, directed Shankar to Mandan Mishra the greatest scholar of that time.

Reaching Mahishmati (City of Mandan Mishra), Shri Shankar challenged Mandan for debate. The debate went on for several days and finally Mandan accepted the superiority of Shankar’s view and became one of his chief sanyasin disciple under the name of Sureshwaracharya.

Then he went for Digvijay (All over win) of his philosophy. And he had such great following that thousands of people joined him in his Dig Vijay Yatra. The famous king Sudhanwan also joined him with his army to give protection. They kept traveling from Kerala to Kashmir and Afghanistan to Nepal to spread his Philosophy which talked about “Adwait” and the philosophy of “aham Bramhasmi, Tat twam asi, Sarvam khalvidan Bramh, Pajananam bramh and ayamatma bramh”.

This understanding of Adwait created peace, love and harmony in society. To establish this Vedic philosophy, basically a philosophy of humanity, he kept travelling, talked to people and convinced them in debate and if somebody was not ready to listen, willing to fight then he fought a war too.

At last, post successfully establishing this philosophy bringing peace, harmony and non- violence to the society, he went to Badrikasharam.

There he established four MATHAs (Centers) of knowledge north, south,east and west part of India and put his disciples to take care of these Matha’s and see that this basic Vedic philosophy is being practiced by the people, and society is not corrupted by ill minds again. Then he walked to Himalayas and disappeared. He was just 32 years old that time.

Thus, Shankar was a great towering personality who within the course of a short life, brought about a thorough revolution in the social, religious, spiritual and philosophical life and thought of India. He laid the foundation of modern Hinduism on a composite, comprehensive, and all-inclusive universal basis. He had such a brilliant mind, scientific viewpoint, and rational approach that he appeals to the people of today. He appears just as modern in many respects, as if he were living today, for he was concerned with eternal universal thoughts. Some of the special problems he dealt with in those days are here even today, and the solution that he suggested are applicable even now. That is why he appeals to all modern people as well.

Shri Shankar was also a brilliant writer. His Sanskrit was mellifluous, and at the same time very forceful, impressive, and direct. His commentaries on the Upanishads, “The Bramh Sutras” and “The Gita”, and other works like “The Vivekacudamani”, and the “Updesa-sahasri” elucidate the different aspects and tenets of the Adwait philosophy and its practical implications, in simple, non- technical charming language, both in prose and verse, and shows ways and means to the realisation of the highest truth. His numerous beautiful and profound hymns exhort us to devote ourselves to the lord and to strive for fulfilment in life by realizing the highest truth.

Shankar was a great illuminated sage, philosopher, scholar and poet. He was also a man of action, a great reformer and organizer, and a stabilizer of society by the resuscitation of ethical and spiritual values.

His life and philosophy are still a source of inspiration for majority off people.