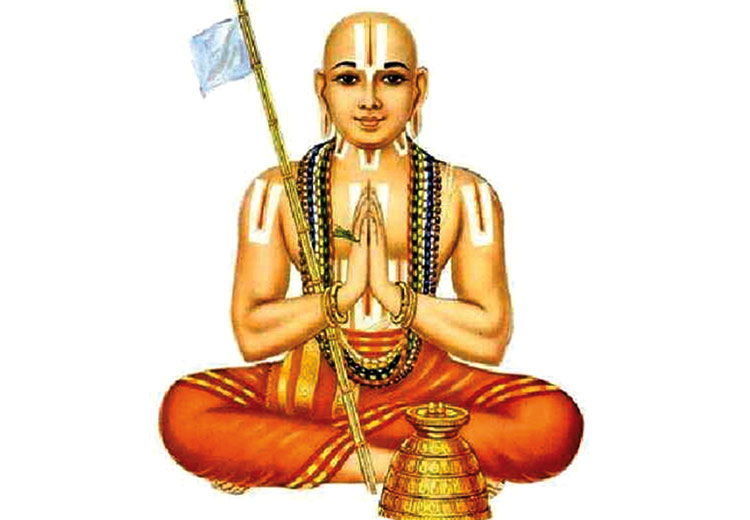 Shri Ramanujacharya was one of the greatest investigators of Vedic tradition. After the departure of Shri Shankaracharya, when people started creating confusion in the society by making a delusory definition of Advaitvad (Monotheism), discarding all the religious knowledge established the theory of “Vishishtadvait” and showed a new path to the society. He was the saint of “Shri Vaishnav Sampraday” who had dedicated all his life in devotion and for the upliftment of the society.

Shri Ramanuj was born in Kali Samvat (the Kali era begins 3,102 years before the Christian era) 4118, Shaakabd (the era which was commenced by the King Shalivahan) or 1017 AD in the month of Chaitra (first month of the Hindu calendar), 30 miles South-West of Chennai at Shri Perambudur. His father’s name was Keshavacharya and mother’s name was Kantimati.

Shri Keshavacharya was a very religious Brahmin. After many years of his marriage, as he did not have any child, he went to Tiruvallikeni and performed an extensive Yagya as a result of which and with the blessings of Lord Parthsarathi, a son was born to him.

That time, mother Kantimati’s brother Shri Shailpurna was one of the chief disciples of Shri Yamunacharya. Seeing the child, he was confident that the child was the incarnation of Aadishesh and that is why he named the child Ramanuj by the name of Ram’s younger brother Lakshman.

Since childhood, Shri Ramanuj was very intelligent and clever. How much ever difficult the lesson be, once the teacher explained, Ramanuj used to understand its meaning immediately. He loved repeated study of religion and being in the company of religious people, he had become dear to Shri Kanchipuram and a great devotee of Shri Varadraj.

At the age of sixteen, Shri Ramanuj had got married. His wife’s name was Jamamba. People also knew her in the name of Rakshakaambal or Tanjammal. After one month of his marriage, his father Shri Keshavacharya expired. His mother Kantimati remained sorrowful in the remembrance of her husband. Thinking that with the change of place, mother would have a change of environment that would help her forget her sorrow, Shri Ramanuj left Shri Perambadur and came to Kanchipuram along with his family.

In Kanchipuram, Shri Ramanuj got educated under the great Advait scholar Yadav Prakash. Hearing the description of mantras from Shri Ramanuj, Yadav got scared that Ramanuj might rescind the theory of Advait and establish the theory of Dwait, so he planned a conspiracy to kill Shri Ramanuj. With this intention, on the pretext of bathing in Ganga he took all his disciples for pilgrimage. On the way, Shri Ramanuj came to know about Yadav’s plans and he ran away in to the jungles of Gondaranya hiding from Yadav. He fell down while running and became unconscious. When he opened his eyes, he saw a hunter couple in front of him who miraculously reached him safely to Kanchipuram and vanished.  Then Shri Ramanuj realized that they were Lord Vishnu and Mata Lakshmi personally who in the disguise of hunter couple had come to save him.

Yadav Prakash, who after Ramanuj was lost, walked further thinking him to be dead when he returned to Kanchipuram, was shocked to see Ramanuj. Inspite of learning about Yadav, Shri Ramanuj met his guru very lovingly. With the modesty of Shri Ramanuj, Yadav felt guilty conscious and once again asked Ramanuj to come back to him to learn.

Few days after this, Yadav Prakash was writing an annotation on “Sarvan khalvidan bramah” and “Neh nanasti kinchan”. Shri Ramanuj did not find the meaning proper. Hearing this, Yadav got very angry and said, “If you think my annotation faulty, it is better you don’t come to me.”

After returning to Kanchipuram, Shri Ramanuj remained upset. One day he asked Shri Kanchipurn to pray to Bhagwan to clear his doubts. It is said about Shri Kanchipurn that he used to talk to lord Varadraaj.

Next day, Kanchipurn said to Shri Ramanuj whatever Shri Varadraj had asked him to say to Ramanuj:

Hearing this, all doubts of Ramanuj were clear. He was very happy and with the order of Varadraaj, he set out for Shri Rangam to get consecrated by Mahapurn but on the way, he met Shri Mahapurn at Vishnumandir in Madurantak. Incidentally, due to the wish of his fellow devotees, Mahapurn was going personally to Kanchipurn to bring Shri Ramanuj to Shri Rangam. Shri Ramanuj got consecrated by Shri Mahapurn at the Vishnu Mandir itself and along with his guru went to his house in Kanchipuram. After coming to Kanchipuram, he learnt all of Tamil series of poetic composition. Just then, one day his wife Jamamba insulted Shri Mahapurn’s wife and feeling hurt with the insult, Shri Mahapurn returned to Shri Rangam.

Not seeing Shri Mahapurn at his house when he returned, Shri Ramanuj was very upset. He could not bear the misbehavior of his wife with his guru and on the pretext of a marriage at his maternal home, he sent her at her parents’ house the very same day and taking refuge in Shri Varadraj’s feet and thinking him as his guru he became an ascetic. Seeing him as an ascetic, Shri Kanchipurn cried out his name loudly as “Yatiraaj”.

After some time with the inspiration of Shri Rangnath and with the orders of Shri Varadraj, Shri Ramanuj went to Shrirangam along with Vararang. At the request of Shri Mahapurn and other devotees, Vararang had gone to Kanchipuram to bring Shri Ramanuj. Everyone wished that Shri Ramanuj should come and take over.

After sometime, with the inspiration of Shri Rangnaath and with the permission of Shri Varadraaj, Shri Ramanuj came to Shri Rangam along with Vararang.

Once, with the inspiration of Shri Mahapurn, Shri Ramanuj to know the Vaishnav Mantra, went to Shri Goshthipurn who lived in Thirukottiyar near Shri Rangam. After returning him for many times, Shri Goshthipurn favored him and said that, “Do not give this mantra to anyone else because who ever will hear this mantra, how much ever sinful he would be, he would straight away go to heaven. Hearing this, Shri Ramanuj was overwhelmed and with an intention of public welfare, he straight away went to the Vishnumandir, gathered people and gave them the mantra, “Om Namo Narayana”.

Shri Goshthipurn got very angry with this. He said, “Ramanuj, you will not get a place even in hell.” Ramanuj replied, “If in exchange of me going to hell, many people will go to heaven, I would happily go to hell.” Hearing this, Goshthipurn was very happy and dedicated his son Saumyanarayan as Shri Ramanuj’s disciple.

Shri Yamunacharya had five great disciples- Kanchipurn, Mahapurn, Goshthipurn, Maladhar and Vararang. Shri Ramanuj used to take education from all of them. Shri Yamuna was present in five parts within his five disciples. After finishing teaching all five of them, Shri Yamuna took Shri Ramanuj’s form and established within him.

Shri Ramanuj had super power to meet God and talk with him. He had the power to take a person who were in trouble in Lord’s refuge and relieve them from their pains, that is why everyone called Shri Ramanuj “Ubhay-Vibhutipati”.

Shri Ramanuj was so merciful that one day the Pujari (Hindu Priest) of Shri Rangnath temple gave him poison but he forgave the Pujari even for this and took him in his refuge.

In between, hearing about his fame, great Mayawadi (one who believes the whole universe to be an illusion) scholar Yagyamurty came for a debate with Shri Ramanuj but became his disciple after being defeated by him.

After this, to instill his theory, Shri Ramanuj along with 74 of his chief disciples and many followers, set out for the world conquest and successfully installed his theory in all of India. It is said that, at Kashmir Sharda Peeth, after hearing the definition of “Kpyasam Pundarikksham”, Sharda Maata attributed him the name “Bhasyakaar”. In those days, Kanchipuram was ruled by a Chola Prince named Krimikanth.

Shri Ramanuj built Yadvadripati temple while living at Yadavadri (Melkot) near Shri Rangam and he went to Delhi and got back the Utsav-vigrah of Shri Yadavadri pati from the Muslim King. After living for years at Yadavadri, Shri Ramanuj returned to Shri Rangam. Endless crowd welcomed him. They were overwhelmed with the darshan of Shri Ramanuj.

In the last sixty years of his life, Shri Ramanuj never went anywhere. People from all the directions used to come to have a glimpse of him and fulfill all their desires seeing him. In very little time, with the effect of his preaching, there was an atmosphere of peace and happiness created and in whole of South India; a situation similar to Ramrajya was created. In his time, he had opposed bad customs like Casteism and with his teachings, showed the path of salvation to many people.

This way, till the time Shri Ramanuj lived, he worked for the Society and culture. When he attained salvation, his age was 120 years. At the time of his death, as his disciples were lamenting, he came back to life for three days for them. Got his statue made from artisans. He got his soul installed in that idol and told his disciples, “I am not going anywhere; I am here with you with my new body.” Saying this, he put his head in the lap of his disciple Govind and legs in the lap of Andhraprun and looking at the shoes of his guru, Shri Ramanujacharya closed his eyes.

Shri Ramnuj had transformed this body of his in 1137 AD. That day was the tenth day of first half of Magh month in Shakabd (the era which was commenced by the King Shalivahan) 1059. The day was Saturday and time was midday.