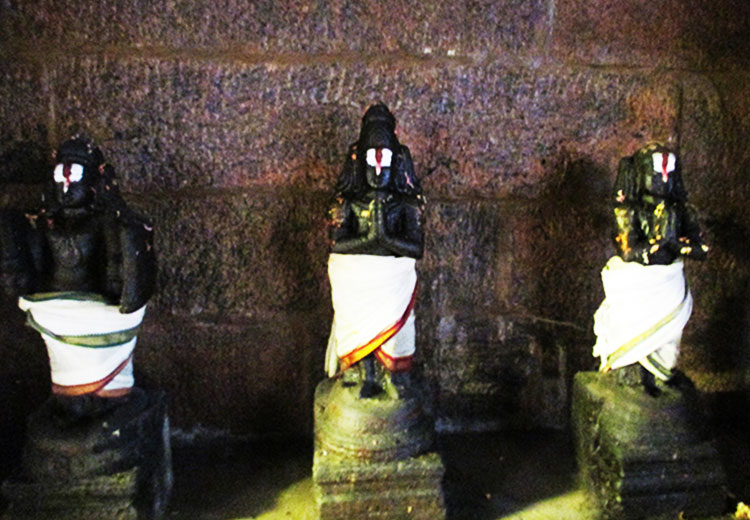 Alwar (in pure Tamil “Azhwar”) means “The one who immerses himself deeply in devotion and bhakti towards the Lord Vishnu”. These devotee saints are called Alwar. There are twelve of these Alwars. These were the first saints who in South India when people opposed religion and set a flow of such devotion that the whole of South India was absorbed in bhakti movement.

These Alwars were the live image of Gita, were the live examples of the preaching of Upanishads and were the live temples of the Lord. Their hearts always remained occupied in meditating Narayan’s name, their speech only had praises of Lord and their feet only circumambulated temples. Their eye only saw Lord Narayan in everything and every incidence. They prayed Narayan as Lord, father and son and in every form and only loved him.

There are different opinions about the life time of Alwars. It is believed that Alwars were born more than 3000 years ago, prior to Kali Yuga. But most people believe it to be 7th to the first half of 9th century. The reason for this is that the poems written by them were compiled by Shri Nathmuni and his lifespan is believed to be from 826 AD.

These Saints have created 4000 padas (poems in praise of God) which are full of knowledge, love, beauty, patience, happiness and immense devotion and are known as “Tamil Veda”. It is because of the divineness of these padas, the collection of their creation is known as “Divya Prabandh” which gives immense pleasure to the Tamil Vaishnavas.

Poigai Alwar, Bhootnath Alwar and Pey Alwar are the three foremost Alwars of the twelve Alwars. That is why these three Alwars are known as Mudhal Alwar.  In Tamil, Mudhal means “First”.

Shri Poigai Alwar was born in Shravan Nakshatra of Kartik month on a lotus flower in Dev Sarovar in Kanchipuram in Tamilnadu. He is believed to be the incarnation of Lord’s Panchajanya (the conch of Shri Kirshna).

It is written in Vaishnav Shastras that Lord Vishnu had sent his ornaments like Vasta (lock of hair), Kaustubh (jewel), Vaijayanti (necklace), Vanmala (wildflower garland) etc, on to this earth for the propaganda of devotion and Shri Poigai was the incarnation of his favourite Panchjanya. That is why he was not born by a human but was self-begotten. Since he was born on a lotus leaf in a Poigai (pond), he is known as Poigai Alwar. He is also known in the names like Saro-yogi, Kaasara- yogi, Poigai-piraan, Padma-muni, Kavinyarporeyeru etc.

Shri Bhootnath Alwar was born in Dhanishtha nakshatra of Kartik month at Mahabalipuram in Tamilnadu on a Madhavi flower in a garden. In the ancient times Mahabalipuram was known as “Mallapuri”. This was a part of Pallava state in those times. This place was also known as Kadal Mallai Kshetram.

He was believed to be the incarnation of Lord Vishnu’s mace. Just as Shri Vishnu’s mace killed demons, he also used to break the ego of nastik (atheist) people.

Shri Pey Alwar was born in Shatbhikha Nakshatra of Kartik month on a Sevvalli Pushpam (red lily flower) in the pond of Adhi Keshav Perumal Temple at Mailapur (also known as Mayurpuri) in Chennai.

He is believed to be the incarnation of Lord Vishnu’s sword named Nandak. “Pey” means insane and he always remained insane in the love for God, which is why people call him Pey Alwar.

People with ancient thoughts believe that all the three Alwars were born in Dwapar Yuga but many believe it to be 7th century AD.

These three azhwars were live images of knowledge and devotion. There are around 300 padas (poems in praise of lord) found that were created by them. People believe these padas to be the essence of Rig Veda.

Apart from Lord, they never craved for anything else. They never lived at one place for long. They kept wandering going around different pilgrimages, have a darshan and moved ahead to another pilgrimage.

Once they went to Sant Thirukkovilur for darshan. Till then, they had not met each other or knew each other. Just then, because of heavy rains and cyclone, Poigai Alwar had to take shelter in a small cottage. As he was tired, he came to the cottage and lied down and was reciting Lord’s name. Just then Bhootnath called out from outside, “Who is inside? Can I get shelter for a night?” Poigai answered, “Of course. There is so much place in this cottage that one man can sleep and two people can sit, come, we both will sit.” Saying this, both of them sat together and started discussing about Lord. Just then Pey Alwar also came there and even he asked for shelter for a night. Poigai and Bhootnath said, “Sure, here, one man can sleep, two men can sit and three can stand.” Saying this, they got Pey inside. All three got introduced and they come to know that all three of them are devotees of Lord.  While discussing about God, all three of them were perplexed to have a glimpse of Lord and just then, they felt as if in the darkness of night, there was a fourth person standing with them. Just then, light spread around and all three saw that Lord Vishnu was standing along with them. Getting the glimpse of Lord, they were all enamored. Right then, all three created 100 padas each while praying. Vishnu was pleased with them and awarded them a boon of salvation.

This was the devotion of the three Alwars and a feeling of wholeheartedness for others. All their life, they roamed around in different pilgrimage sites and while singing various padas, propogated bhakti.