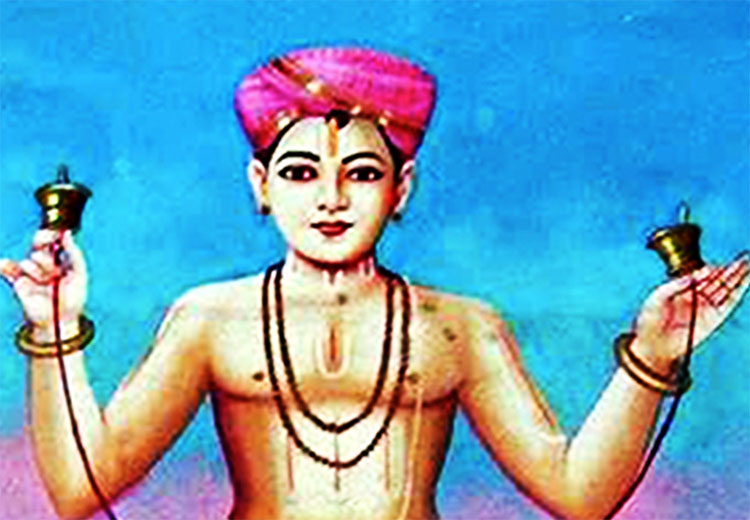 Shri Periya Azhwar was born on the Ekadashi Tithi of Jyestha month on Sunday in the Swati Nakshatra at Shri Villiputtur in Tamilnadu. Traditional scholars believe his birth period to be 3056 BC whereas according to modern scholars he was born anywhere between 7th to 9th century.He is believed to be the incarnation of the chariot of Lord Vishnu and one of the twelve Vishnu devotee Azhwars of South India.

Shri Periya Azhwar’s father’s name was Mukund Bhattar and mother’s name was Padma Valli. Both of them were great devotees of Vishnu and used to go to the temple everyday and pray for a son. One day, by the grace of God, a son was born to them and this child was so divine that at the time of his birth, his mother did not have any labour pain. With the birth of this divine and brilliant child, the overwhelmed parents lovingly named him “Vishnuchitta”. This child who was different from other children and was very intelligent. His parents took very good care of him and got all the ceremonies done that were necessary for a Brahmin. At the age of seven, the ceremony of his investiture with the sacred thread was carried out.

Like his name, Vishnuchitta was a great devotee of Lord Vishnu. Even at the age when he did not know who Shri Vishnu was, he had dedicated himself at the feet of Lord Vishnu. He used to spend most of his time in the temple and meditate and recite Vishnu’s name and sing “Vishnu sahastranaam”.

“Narayan is the essence of all the knowledge and is the ideal of all religions and so now I will always live in His shelter”, thinking this he had dedicated all his life in to the feet of Shri Vishnu. He knew that when Shri Vishnu had incarnated as Shri Krishna, he loved to wear garlands of beautiful flowers so he used to go to the temple everyday with a garland of flower and offer it to Lord Vishnu.

When he grew up, he sold all his property and bought a plot near the temple where he grew all kinds of flowers so that he could offer a garland of flowers to Shri Vishnu throughout the year. He had also dug a pond wherein he had grown lotus flowers. Every day, he used to recite bhajans while gardening and watering plants, take care of them and early in the morning pluck the best of flowers, make a garland out of it and offer it to Shri Vishnu. After garlanding Bhagwan, he used to keep starring at the ornamented divine idol and get enamored with devotion.

He never liked to talk about anything else apart from bhakti. One night, after meditating and reciting bhajans till late night, just when Vishnuchitta went off to sleep, Narayan came into is dreams and said, “O my utmost favourite devotee, I am very pleased with your devotion. Go to Madurai as King Vallabh Dev there has invited representatives of all the religions and has announced that whoever will show him the easy way to God will get gold as a reward. Go to Madurai and advise the king on love and devotion and flutter the banner of victory.”

Vishnuchitta felt blessed with the Lord’s order and said, “O Lord!  I have no knowledge of the shastras (a sacred book), I am a mere worshipper of yours, with your orders and retaining your footsteps in to my heart, I will definitely go there but what will I speak there?”

Then Lord said, “O Vishnuchitta, there is no one who understands the path of bhakti (worship) better than you. Just go to the court; my blessings are with you.”

With the orders of Lord, Vishnuchitta reached Madurai. In the court, Shri Vishnuchitta answered all the questions of King Vallabh Dev specifically and cleared all his doubts proving in front of everyone that “Lord Narayan is above all and the surrendering every way at his feet is the simplest way of bhakti. Only Lord Narayan is our protector. He is present in the hearts of all the animals. Lord is away from all the affections and fascinations and worshipping him is the only way to get away from affection. Have faith in him, recite his name all the time, praise him and chant his mantra “Aum Namo Narayana” all the time.”

The king was enlightened with the answers of Vishnuchitta which were full of devotion.  All his doubts regarding worship were cleared and he bowed to Vishnuchitta and accepted him as his guru and adorned him with the title of “Bhattar Piran”. He took out a procession with stately honor and welcomed Shri Vishnuchitta. People from the state rushed to have a glimpse of Shri Vishnuchitta. Shri Vishnuchitta, who never had the hunger for publicity but only devotion, confused with this kind of honor, shrunk and looked at the sky as if he wanted to say, “O Lord! I don’t want respect; I just want to worship you.” But as soon as he looked up at the sky, he was shocked, he saw that to see the scene of Lord Vishnu along with Mata Lakshmi who had personally come on to his carrier Garuda and hearing the chanting of the mantra (charm) from lakhs of men and women was also pleased.

Seeing this, Vishnuchitta was delighted. Confused with love, his eyes were filled with tears and there, in front of everyone, he praised Bhagwaan. That is why he was called Periya Azhwar. Periya means big. He was the biggest Azhwar who had praised Lord Vishnu in front of a lot of people.

After this, Periya Azhwar took leave from his disciple King Valabh Dev and returned to Villiputtur and once again, became busy worshipping the Lord. While worshipping Vishnu, he wrote many good Padas (poems in praise of Lord). These were so sweet and real that since then, till now people still read them. His creations are, “Thiru Pallandu” and “Periya Azhwar Thirumozhi”.

One of his creations says, “He who does not worship Lord Narayan is the one deserving favour. They have simply given their mothers the labour pain. Those who don’t recite Narayan’s name are full of sins and live with lots of sins. Only those who set Mahadev in the temple of their hearts and worship Him with the flower of their love are relieved from the chain of death and life.”