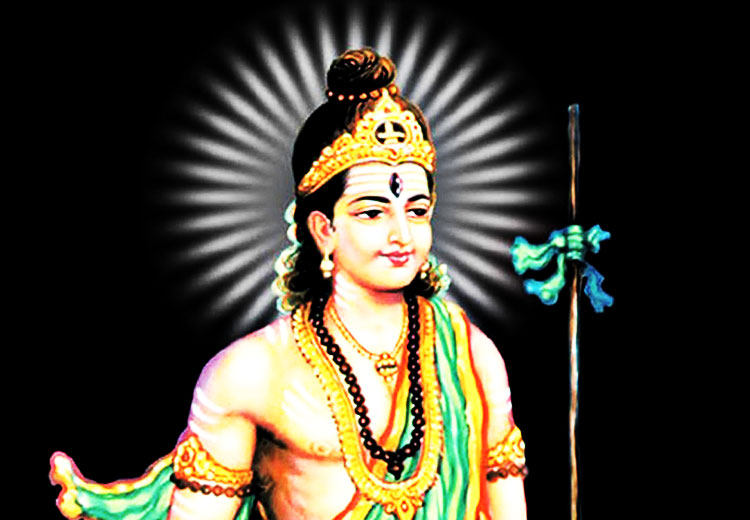 There is an important description of Vir-Shaiv (pertaining to Lord Shiva) theory in Vedas, Upanishads and Puranas. This theory is also known as Shiva-dvait theory or Shakti-vishishta-dvait theory. After the origin of this universe, five epithets of lord Shiva namely Shri Renuk, Daruk, Ghantakarn, Dhenukarn and Vishwakarn brought this theory to people. These five principals manifest from Shivalinga in each era and for the welfare of people, publicize the theory of Shiva’s devotion. There is no specific information available about their lifespan but it is believed that they appear in every era and attribute deliverance right from King to Saints and laymen.

Shri Renuk means Shri Renukacharya was the first of these five priests. With the inspiration of Lord Shiva, he had manifested from Someshwar Ling ( Somnath Ling) in Kulyapak region and he established a monastery in Rambhapuri region which is named Virsinhasan.

It is said that after manifesting from Somnath Ling, Shri Renukacharya travelled by air and met Agastya Muni and was given a warm welcome in his Ashram. Pleased with this, he preached Agastya Muni about Shiv-Dvait theory. The preaching given by him is famous even today in the name of “Siddhant-Sikhamani” or “Renukagastya-Samvad”.

Shri Renukacharya who taught Shiva pooja to Vibhishan and Agastya in Treta Yuga, had manifested in Kalyug also and while living for 1400 years on this earth, he had preached the same to the whole earth. Apart from preaching King Vikramaditya of Ujjain on Shiva–tatva, he had also gifted him a sword with which Vikramaditya had defeated his enemies and had gained lot of fame.

Shri Shankaracharya, who established Advaita theory all over India when he was in Shri Shaila region, then got an indication through an Akashvani (an oracle) to go to Shri Renukacharya in Malayachal and take a Shivlinga named Chandramaulishwar and do pooja which would make all his wishes come true. Shri Shankaracharya did the same and after doing ceremonious pooja, his wish came true. He had handed over this linga to Mandan Mishra and even today, pooja of this linga is done in Shri Shankaracharya’s peeth.

After campaigning for the worship of Lord Shiva for 1400 years, Shri Renukacharya went to Kanchi region and started living in Ekamreshwar temple. While living there, he prayed, “ Lord! I want to come to you now, but there would be a need for a guru to take ahead Shivadvait so that it can be carried forward to people.”

After his prayer, he got an indication from God , “ Sit in front of Ekamreshwar idol and touch the earth while praying, your wish will be fulfilled.” Acharya did the same and just as he touched the land, a divine child came out of the earth who he named Shri Rudramani. Within few days he grew up and acharya consecrated him and educated him with all Vedas and shastras. After this, he appointed Shri Rudramani as chief of his dharmapeeth Shri Renukacharya moved towards Shri Somnath region and after reaching here, he merged in to the shivling from where he had manifested.

Though the general public will arouse a question regarding the origin and death of Shri Renukacharya -the fact is not that when was he born , how long he lived but it is that till the  time he lived, he educated people towards devotion of Lord Shiva and showed them the path to God. It could be a topic of debate for historians that whether he was present in Treta Yuga or Kali Yuga or in both but no one can deny the fact that the path of devotion that he showed us is prevalent like the flow of river Ganga within people even today and gratifies them.