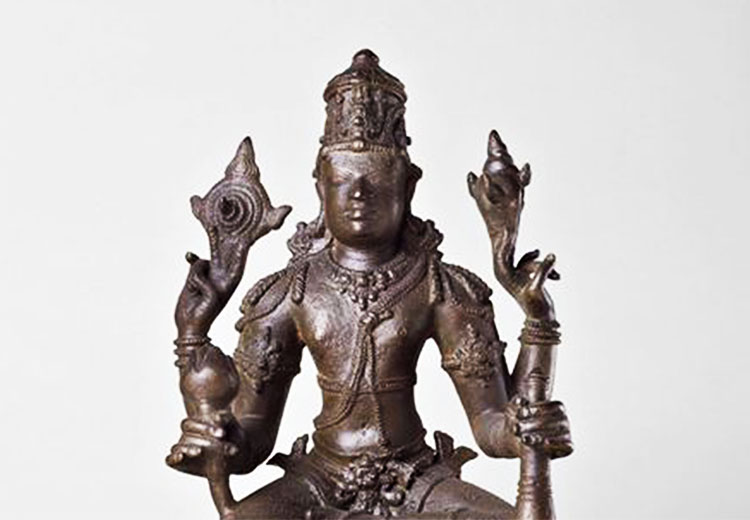 Shri Kanchipurna was born in Punamalai village in Tamilnadu. His lifetime is believed to be from 10th century to 11th century. A Shudra by caste and probably not much educated but right from childhood he had made himself busy in the service of Shri Varadraaj. Without fail, everyday, for the pooja of Shri Varadraaj he used to go to Kanchipuram from Punamal. Seeing his strong devotion for God, even the greatest Pandits used to look at him with respect. He always thought as to what he could do to please Lord Varadraaj.

During summer, he used to slowly wave a fan drenched in cold water and feed his Lord. He used to take special care as to where does the flowers with more fragrance grow, where sweet fruits were ripening and as soon as the flowers grew and fruits ripened; he would either buy them or beg for them and offer it to his beloved Shri Varadraaj.  Common people believed that Shri Kanchipurna was not a normal human being but is in service for Shri Varadraaj and had come from Vaikunth on to this earth to serve Shri Varadraaj.

Residents of Kanchipuram loved and respected him too much. His nature was like that of a child, straight without any ego or pride. He was always smiling. Any one who would see him, his sorrows would vanish immediately. While talking to people, he would in-between start talking to some invisible person. People believed that Varadraaj always lived with him and he used to talk to him in between while talking to others.

People also believed him to be the chief form of Varadraaj. Everyone knew that Bhagwan Varadraaj kept talking to him and so considered his expressions as that of Varadraaj only. In spite of being the chief devotee of Lord, it was his greatness that he always thought himself to be insignificant. He always introduced himself as Shudra and specially respected Brahmins. Brahmins respected him too and considered him more respectful than them. It was Shri Kanchipurna’s devotion with which Shri Ramanujacharya was impressed and right till the time of adopting asceticism he requested Kanchipurna to accept him as his disciple but every time Kanchipurna who loved Ramanuj too much, avoided saying that he was a shudra and does not hold a right to initiate Ramanuj. But according to Shri Ramanuj, no one could be more respectful than a great devotee and so when Shri Kanchpurna did not agree to him, Ramanuj thought of inviting him for lunch and then eat his left over food and sanctify himself. At Shri Ramanuj’s insistence Kanchipurna accepted his invitation but he understood what was going on in Ramnuj’s mind and so the next day he reached Ramanuj’s house the time when Ramnuj had gone to the temple to pick him up. Shri Kanchipurna gave an excuse of time and asked Ramanuj’s wife for food and after eating, he threw the left over food so far that Ramanuj could not find out. On coming back, when Ramanuj came to know that Kanchipurna had already left after having food, he felt very bad that he missed a chance to eat Kanchi’s left-over food. He got very angry with his wife who was cooking food again after taking bath as a shudra had eaten and so needed to sanctify. Ramanuj considered this as an insult of great saint like Kanchipurna because there is no caste of devotees as they are only form of God where God himself resides in their hearts.

After this incident, Shri Kanchipurna went away to Tirupati. When he came back to Kanchipuram, Ramanuj requested him to pray to Bhagvan Varadraaj to clear his doubts. Next day Kanchipurna told Shri Ramanuj that Bhagwan Varadraaj had said six things to clear his doubts. Of these six things, one was that his Guru was Shri Mahapurna and he should attain his initiation from him. With this, Ramanuj’s search for guru got over and taking initiation from Shri Mahapurna he felt a sense of bliss.

After the initiation of Shri Ramanuj, when Shri Kanchipurna first saw him in the clothes of an ascetic, he got emotional and out of excitement he addressed him “Yatiraaj”. Even today people call Ramanuj in the name of Yatiraaj.

Kanchipurna was Vaishnav wherein one finds the highest degree of devotion for Bhagwaan. He was a perfect picture of devotion. Whatever love he had for God, similar love he had for the devotees of Lord. The only motto of his life was to serve them both. The devotion of this devotee is inspiring for all those who want to go on the path of bhakti (devotion). He set an example of devotion and is imitable.