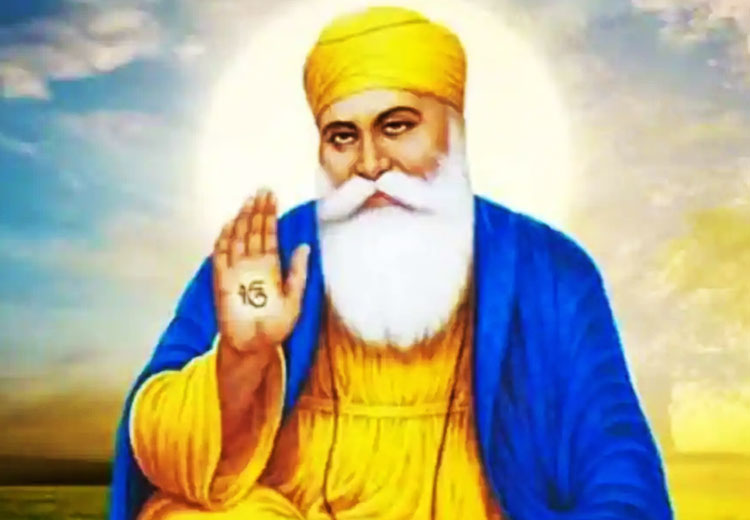 The founder of Sikh religion, the first guru of Sikhs, Guru Nanak dev was born on 15th April, 1469 at a village named Rai Bhoj ki Talvandi near Lahore in a Kshatriya Hindu family which is now known as Nankana Sahib. His father’s name was Mehta Kalyan Das bedi and mother’s name was Tripta Devi. His father was a Patwari by profession and worked for a Zamindaar named Rai Bullar Bhatti. Shri Nanak had an elder sister named Bebe Nanaki.

Guru Nanak was very quiet by nature since childhood. Most of the time, he used to like to remain alone. His mother always wanted him to go out and play with other kids. One day, on too much pestering by his mother, Nanakji went out to play and told other children to play a new game and then he got all the children to sit in a circle in Padmasan position and told them to murmur “Ek Omkar”.  All the children sat in a circle with their eyes closed in a meditating position. Mother saw that she had sent the child to play but rather than playing he made other children leave play and sit and meditate. She was amazed to see this.

In Samvat 1532, his father sent Nanakji to Gopal Pandit to learn Hindi, in Samvat 1535 to Vrajlal Pandit to learn Sanskrit and in 1539 to Maulavi Kuttubuddin to learn Persian language but Shri Nanak dev, with all his spiritual knowledge made all his gurus his disciples and explained them that an educated man is fool if he does not understand the essence of knowledge.

Guru Nanak Dev always remained engrossed in reciting lord’s name and would see everything with spiritual inclination. Once his father gave him money and sent him to the market. On the way he met some saints who were hungry. Nanakji spent all the money that he had feeding them. On returning, when his father asked him about the material, he replied, “There cannot be a better deal than the one that I have bought today.” His father got very angry at this. He even beat him. But he did not stop after this. Nanak never missed a chance to serve and devotion.

In between Nanakji’s sister Nanaki took him to her house in Sultanpur and with the help of her husband, put Shri Nanak for a job with Daulat Khan Lodhi.

In Samvat 1544, Shri Nanak was married to Shri Sulakshna Devi, daughter of Moolchand. They were blessed with two sons. One was named Shri Chand and other, Lakshmi Das.

Though Nanak was on service, his mind was always diverted towards God. Many a times he would give away things for free but when there was an inquiry, the account always came out to be proper. Once while weighing the flour, while counting, when he reached thirteen he weighed all the flour saying tera tera (yours).

There was a dense jungle Rohari near Sultanpur. Sometimes, Nanak would go inside the jungle and meditate whole night and come back. Once he went to the jungle and did not come out for three days. It is said that during these three days, Shri Nanak had attained self accomplishment.

In Samvat 1554, Shri Nanak travelled to different counties and countries and shared his thoughts with people. He was in favour of humanity and very clearly gave a slogan “Koi Hindu na Musalman” (no one is Hindu or Muslim). His tour happened in 4 sections. In the first, he first went to Emanabad and there, by staying at Lalo’s house he cleared the misconception of untouchability.  Then he travelled to Delhi, Haridwar, Kashi, Gaya, Jagannathpuri etc.

In the second tour, he visited Setubandh Rameshwaram, Singhaldwip (Sri Lanka) etc. and campaigned for devotion. In the third tour he visited Sarmor, Gadhwal, Hemkunt, Gorakhpur, Sikkim, Bhutan, Tibet etc. In the fourth section he travelled west and reached Mecca via Baluchistan where he broke the rule of praying namaz facing only in one direction. He also visited countries like Russia, China, Saudi Arabia, Persia, Baghdad, Turkey and Greece during this visit.

Guru Nanak’s style of preaching was very innovative and practical. When at Mecca, Guruji slept with his legs pointing the Kaba. Seeing this, the Kazi there got very angry. At this, Gurji told Kazi, “Tell me a place where God is not prevalent and I will sleep there.”

After completing his tour in Samvat 1579, Shri Nanak started living in Kartarpur which he had personally built in 1561. For the people to get guidance even after him, he handed over the responsibility to his favourite disciple Lahanaji and announced him the next Guruji and changed his name to Guru Angad. After few days, on 22 September 1539, Guru Nanakji left for his heavenly abode. He was 70 years 4 months and 3 days old.

All of Guru Nanak’s teachings and speeches are compiled in the religious book of the Sikhs “Guru Granth Sahib”.

Guru Nanak Dev believed that a society free of casteism only can progress, that is the reasoning behind the famous “langar” where everyone sits in one line and eats thereby shedding away the inhibitions of religion, caste and creed.