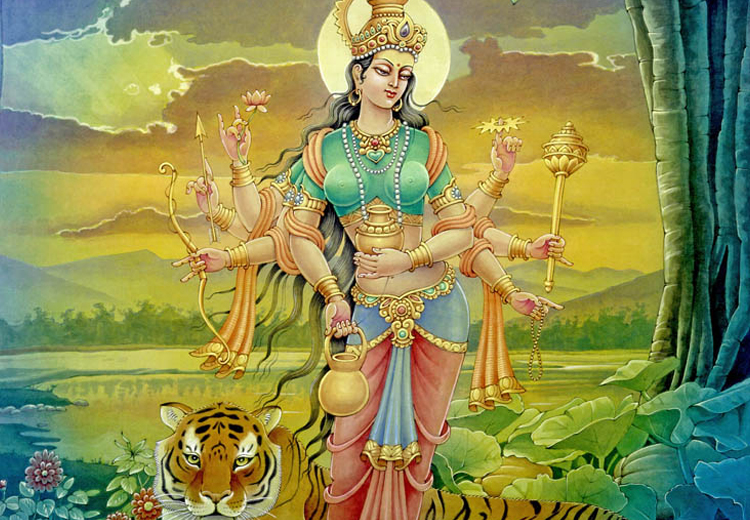 Kushamanda is the creator of cosmic egg – the Brahmanda. It is believed that when the universe was non-existent, Goddess Kushamanda created the cosmic egg with her smile, thereby ending the darkness and bringing the light to the existence. With the glance of her left eye, she created Kali. From the left eye, she created Saraswati, and from the third eye, she created Lakshmi. From Kushamanda’s face was created Shiva, from feet, Brahma, and from arms created Vishnu. Thus, Kushamanda is the creator of trinity of Gods and Goddesses. She is worshipped on the fourth day of Navratri – the nine divine nights dedicated to fierce Goddess Durga. Thus, she is an aspect of Goddess Durga. It is also believed that it is Goddess Kushamanda who gives Sun its luminosity. She is depicted as eight-armed, holding lotus, arrow, bow, kamandal (pot), rosary, Gada (mace), and chakra (chakra).

It is about the time when the universe was no more than a void full of darkness. There were no indications of the world anywhere. But then a ray of divine light, which is ever existing, spread everywhere, illuminating each and every nook of the void. This sea of light was formless. Suddenly, it started taking a definite size, and finally looked like a Divine Lady, who was none other than Goddess Kushmanda herself. The birth of the universe occurred because of the silent smile of Goddess Kushmanda. She was the one who produced the Cosmic egg. Her smile sent away the entirety of the darkness and thus formed a new creation of the universe. She gave light and life to the entire universe with her silent smile. The earth, planets, sun, stars and the galaxies were all brought into being. But to sustain life, the world needed the sun God. So, the Goddess centred herself in between the sun and she became the cause of the energy and light necessary for life. The sun gives life to the world and Goddess Kushmanda herself is the power of the sun and is the source of all energy when she resides within the core of the Sun God. It was to create a balance in the universe and provide life to all living beings from the sun rays, her power gives the sun its capability to give life to everyone, as she herself is Shakti.

Benefits of having Goddess Kushmanda painting

The fourth manifestation of Goddess Durga, Goddess Kushmanda stands for all things healthy and divine. Worshipped on the fourth day of Navratri, Kushmanda is hailed as the consort of Lord Shiva who is the embodiment of happiness and harmony. The goddess is said to bring wealth and health in the lives of those who worship her.

The radiance and glow on Goddess Kushmanda’s face is believed to be indicative of her governance over the Sun. The fourth most powerful form of Durga, Kushmanda is a carrier of light and illumination which guides those who tread on the path of darkness.

It is believed that it is this form of Durga which eliminated darkness from the world with her smile. And hence, every pcture of the goddess in this form has a benevolent smile on her face. Maa Kushmanda is Lord Shiva’s consort and improves the health of the devotee. She also bestows immense wealth and strength to her bhakts.