Goddess Durga is a fierce warrior form of Hindu Goddess Shakti. She was created by the Hindu God Trinity – Brahma, Vishnu, and Shiva – to fight a demon, Mahishasura, when the Gods were unable to stop him. She fights with evil forces who threaten peace and Dharma. She is depicted as eight-armed riding on lion, holding Chakra (disc like weapon), lotus, sword, mace, trident, bow, and conch.

Durga is the Mother of the universe from who comes forth the creation, sustenance and dissolution of all beings and all worlds. She is Chit-Shakti, the power of consciousness, out of which the cosmos coalesces as matter, life and mind.Goddess Durga, through all her forms, encompasses the essence of salvation and sacrifice. She is the mother of bounty and wealth, as also of beauty and knowledge.

The Sanskrit word Durga means a fort, or a place that is protected and thus difficult to reach. Durga, also called Divine Mother, protects mankind from evil and misery by destroying evil forces such as selfishness, jealousy, prejudice, hatred, anger, and ego. Another name for Durga is Durgatinashini which means ‘the one who eliminates suffering’. Her name thus indicates her role as the one who protects her devotees and removes evil from the world.

There is an interesting tale of the fierce battle of Goddess Durga with demon Mahishasura, a demon who earned the favour of Lord Brahma after long and hard penance. Lord Brahma, pleased with the devotion of the demon, blessed him with a boon that only a woman can kill him. Empowered with the boon, Mahishasura started his reign of terror over the Universe and people were killed mercilessly. He even attacked the abode of the gods. The war between gods and demons lasted a hundred years, in which Mahishasura was the leader of the Asuras or demons and Indra was the chief of the gods. In this contest, the army of the gods was defeated by the more powerful demons. When Mahishasura conquered the gods, he became their leader. 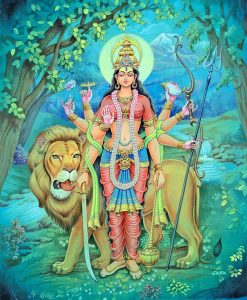 The gods then gifted the goddess with their weapons and other divine objects to help her in her battle with the demon, Mahishasura. Lord Shiva gave her a trident while Lord Vishnu gave her a disc. Varuna, gave her a conch and noose, and Agni gave her a spear. From Vayu, she received arrows. Indra, gave her a thunderbolt, and the gift of his white-skinned elephant Airavata was a bell. From Yama, she received a sword and shield and from Vishwakarma (god of Architecture), an axe and armour. The king of mountains, Himavan gifted her with jewels and a lion to ride on. Durga was also given many other precious and magical gifts, new clothing, and a garland of immortal lotuses.

After a fierce combat, Durga finally slew the demon king with her trident. Heaven and earth rejoiced at her victory and peace was once again restored to the three worlds.Another name for Durga is Durgatinashini which means ‘the one who eliminates suffering’. Her name thus indicates her role as the one who protects her devotees and removes evil from the world. 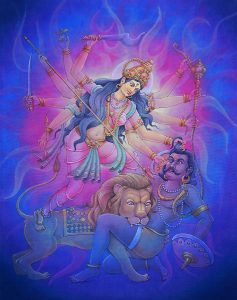 Like Shiva, Mother Durga is also referred to as Triyambake, meaning the three-eyed Goddess. The left eye represents desire and has the peace and calmness of the moon; the right eye represents action and holds the power of the sun; and the central eye is the all-knowing eye with the ability to burn with its power of fire.

Goddess Durga is depicted as riding on a lion or a tiger. A tiger symbolizes unlimited power. Durga riding a tiger indicates that she possesses unlimited power and uses it to protect virtue and destroy evil.  The lion is a symbol of uncontrolled animalistic tendencies (such as anger, arrogance, selfishness, greed, jealousy, desire to harm others etc.) and her sitting on it reminds us to control these qualities, so that we are not controlled by them.

She is usually shown wearing a red sari.  The color red symbolizes action and the red clothes signify that she is destroying evil and protecting mankind from pain and suffering.

Thus, Goddess Durga symbolizes the divine forces (positive energy) that is used against the negative forces of evil and wickedness. She represents pure energy (positive), known as divine light or jyoti that is the embodiment of feminine and creative energy.

Benefits of having Goddess Durga Potrait

Here, ‘Goddess Durga’ paintings are printed on coated matt paper by inkjet printer, using ultra chrome inks with an off-white paper mounting with golden border, and encased inside a fibre frame with acrylic sheet cover in the front.