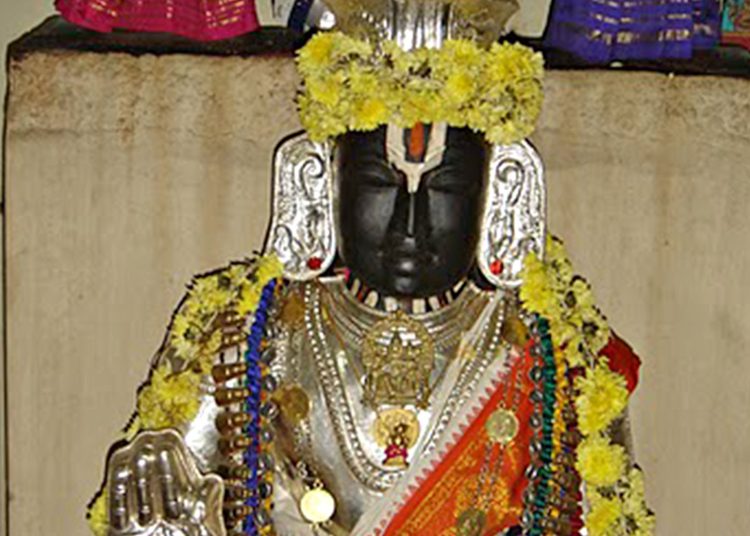 Shri Nathmuni was the greatest saint of modern Vaishnav religion, who brought to the forefront the creations of Azhwars that had vanished with time and also created awareness in the Vaishnavas and set a path for the future acharyas (saints) of Vaishnav Sampraday. It was Nathmuni with whose direction the first Shri Yamunacharya and then Shri Ramanujacharya took the Vaishnav religion to its ultimate superiority. That is why, when Vaishnavas of South India talk about their honorable “Muni-Trayam”, the first name that comes is that of Nathmuni. The other two great Saints of “Muni-Trayam” are Shri Yamunacharya and Shri Ramanujacharya.

Shri Nathmuni was born in Anuradha Nakshatra of Jyeshtha month at Virnarayanpuram in Tamilnadu. According to S.Krishnaswamy his life span was from 823 to 917 A.D. According to M.U.Raghav Aiyyar it was from 825 to 918 A.D.. Few scholars believe the year of his birth to be 824 whereas few believe it to be 826 A.D.

Nathmuni was born in a Brahmin family. His son’s name was Ishwarmuni who was very loving and a genius. Ishwarmuni got married at a young age, enjoyed the marital life for a few years and then leaving all behind, he died. Nathmuni, who loved his son was sad with his untimely death and so, he left terrestrial life and became an ascetic. Ishwarmuni’s widow Sahdharmini gave birth to a divine child who became famous as “Yamunacharya”. It is said that once, while Nathmuni, along with his wife, son and daughter-in-law were on a pilgrimage all over India, on the banks of river Yamuna near Vrindavan, his daughter-in-law conceived and that is why when his grandson was born, Nathmuni named him Yamuna.

Nathmuni was the foremost amongst the pundits of his time. There was no other devotee as Nathmuni in his time. As he had excelled in yoga, people also called him “Yogindra”.

Once, Shri Nathmuni heard few pilgrims singing 10 Padas (padas sang in praise of god) of “Tiruvoimozhi” written by Shri Nammazhwar. The padas were filled with so much devotion that Shri Nathmuni got perplexed with emotion. The padas also had a description, which said that of the 1000 padas these are 10 padas. Hearing this, Shri Nathmuni became anxious to know all the 1000 padas. He asked the pilgrims about the rest of the padas but alas. He asked them again that there must be somebody who knows about the rest of the padas, the pilgrims told him about “Paraankusadaasa” who lived in Kurugur and that he might know something about it.

Hearing this, Shri Nathmuni, recited the 11 padas created by Madhur Kavi twelve thousand times. It is said that pleased with these, Nammazhwar personally came and gave Shri Nathmuni not only the 1000 padas of “Tiruvoimozhi” but also all the creations of the twelve Azhwars.

Before his death, he had ordered his disciple to direct Shri Yamuna on to the path of spiritualism who was ruling half the kingdom of King Pandava after winning from him. It was because of his foresight that later Shri Yamuna became famous as one of the greatest saints of Vishishtadwait (a philosophical theory according to which the soul and matter are not considered quite inseparable).

Shri Nathmuni had written three books namely, Nyaya Tattva, Yoga Rahasya and Purusha Nirnaya but unfortunately, none of these books are available now.Shri Namthmuni was the first guru of the Vaishnav Guru Paramparaa of South India.