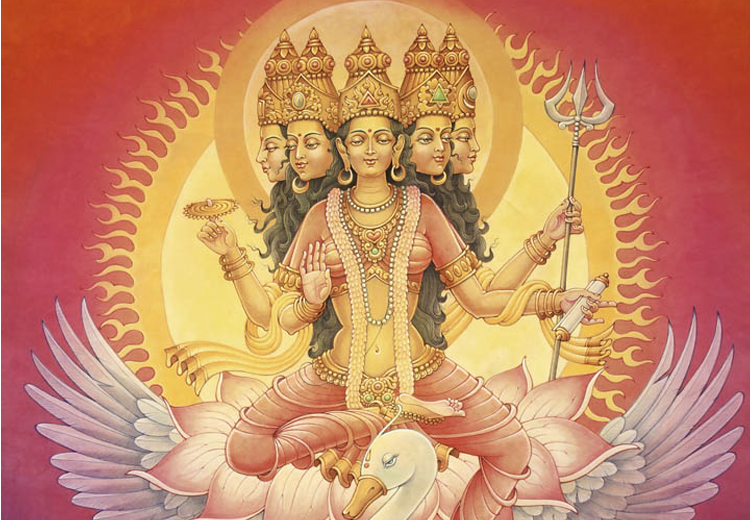 Goddess Gayatri – The mother of the Vedas

Goddess Gayatri is a form of Goddess Saraswati and consort of Hindu God Brahma, the god of creation. She has given the Vedas to the mankind. She is believed to be the divine personification of popular hymn Gayatri Mantra, which was created by Sage Vishwamitra. She is depicted as five-headed, representing five elements, earth, water, air, fire, sky, and ten-armed.

Gayatri Devi is an incarnation of Saraswati Devi, consort of Lord Brahma, symbolising the “shakti” (strength) and “dev” (quality) of Knowledge, Purity and Virtue. Saraswati Devi is held to be the patronness of the Arts, being a poet and musician, as well as skillful composer. In the form of Gayatri Devi, with the blessings of Lord Brahma, she is believed to have given the four Vedas to mankind.

The word Gayatri is a combination of ‘Gaya’ which translates to mean the hymn of wisdom and ‘Tri’ represents the combined strength of the three Goddesses. Goddess Gayatri is worshipped as the deity, which expresses the untiring pursuit of knowledge and wisdom. As per the Vedic literature, she is portrayed as the female form of the light of the sun. The light itself denotes the wisdom that enlightens the soul.

Benefits of having Goddess Gayatri Painting

Worshipping of Goddess Gayatri bestows great sanctity to everything that the devotees undertake. They get blessed with sharp intelligence, exceptional radiance, great enthusiasm and tremendous zeal, so as to take on responsibilities and complete them successfully. She answers their sincere prayers by removing their obstacles and solving their problems, and bestowing them with strength, wealth, prosperity and success. The prayers also purify the self and can lead to immense spiritual attainments.

Here, the paintings are printed on coated matt paper by inkjet printer, using ultra chrome inks with an off-white paper mounting with golden border, and encased inside a fibre frame with acrylic sheet cover in the front.