Brahma – The Creator of Universe 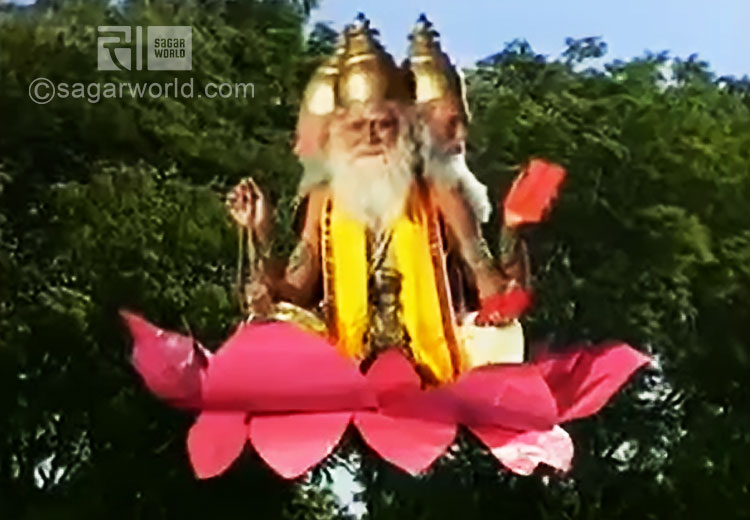 Brahma is the first god represented in the Hindu Triad (Brahma, Vishnu and Shiva). He is the creator of the universe and all living beings are said to have evolved from him.

Brahma is depicted as red in colour with four heads, bearded faces, and four arms. His hands held a Kamandalu, his bow or a rosary, a sacrificial ladle, and the Vedas.

According to the ancient beliefs, Brahma came into being from the navel lotus of Lord Vishnu who was lying in meditation in the Ksheersagar.

With each head he continually recites one of the four Vedas. The four Vedas are said to have originated from his head.

The four castes (see Varna) are also believed to have originated from Brahma: the Brahmins from his head, the Kshatriyas from his arms, the Vaishyas from his thighs, and the Shudras from his feet.

Brahma’s abode is known as Brahmalok, which is said to contain all the splendors of earth and of the heavens of the other gods.

His vehicle or vahan is a white swan or goose, which has magical abilities: it can separate soma and milk from water. Therefore this bird is also a symbol of sifting well from evil.

His consort is Saraswati, the goddess of wisdom and science, the mother of the Vedas, and the inventor of the Devanagari script.

She is represented as a fair woman with four arms, dressed in white and seated on a white lotus.

As goddess of the arts, she is shown playing, or holding, a Veena. In one of her right hands, she holds a book of palm leaves and in the other, a lotus. In her left hands, she has a string of pearls, and a damaru.

He has written books on Vastushashtra (the art of building a house) and administration of justice.

He is named the principal of philosophy in the Upanishads.

Brahma is supposed to be the creator of this universe. ‘EKOHAM BAHALYAM’

Which means ‘I am one, wants to be many’ was Brahma’s desire and this became the inspiration for him to create the universe.

This is Brahma’s ‘PARA’ (spiritualism) and ‘APARA’ (materialism) nature which is believed to be vitality and nature.

With the nature, things are created and with vitality power, life is penetrated in them.

In the process of creating universe, Brahma first created Manu and Shatrupa. Manu is said to be the first man of the human world. 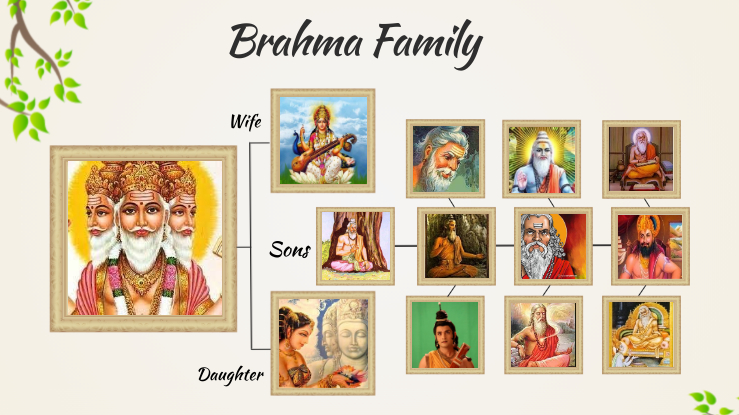 Brahma also created Kamdev and Rati as the inspiring substance for the ten ‘MANASPUTRAS’ (Manusmriti are Marichi, Atri, Angirasa, Pulastya, Pulaha, Kratu, Vashishta, Prachetas or Daksha, Bhrigu, and Narada) are called Prajapatis and the world further developed with the Prajapatis only. He is also believed to have created the Saptarishi, or seven great sages, to help him create the universe.

Another story in connection with Brahma’s four heads is that when Brahma was creating the universe, he made a female deity known as Shatrupa (one with a hundred beautiful forms).

Brahma was immediately infatuated. Shatrupa moved in various directions to avoid the gaze of Brahma. But wherever she went, Brahma developed a head.

Thus, Brahma developed five heads, one on each side and one above the others.

In order to control Brahma, Shiva cut off the top head. Also, Shiva felt that Shatrupa was Brahma’s daughter, being created by him.

Therefore, Shiva determined, it was wrong for Brahma to become obsessed with her.

He directed that there be no proper worship on earth for the “unholy” Brahma. Thus, only Vishnu and Shiva continue to be worshipped, while Brahma is almost totally ignored.

Ever since this incident happened Brahma has been reciting the four Vedas in his attempt to repent.

There is no other place in world where he is worshipped.

According to an ancient story, Savitri, wife of Brahma (who is also called Saraswati at many places) reached late for the Yagya and Brahma got angry and married Gayatri, a milkmaid in Pushkar and started the yagya.

At this, Savitri cursed him that he will not be worshipped at any other places in the world except Pushkar.

The world is said to exist for one Kalpa, or one day in the life of Brahma. At the end of a Kalpa, the whole world is destroyed.

Brahma is then believed to go to sleep for one night, which is as long as a Kalpa.

When he awakens, he recreates the world. This process (Pralaya) is repeated for 100 years of Brahma, which is the life span of one Brahma.

Then everything dissolves into its constituent elements. This whole process is repeated unendingly.

In the current trend of pleasure loving generation which is destroying the moral values, the creator of universe and symbol of knowledge, Brahma should be regarded as the God of the welfare of human civilization.

Chitralekha – the artist who brought two lovers together

Banasur – demon with a thousand arms

Banasur - demon with a thousand arms