Why Ganga Named As Jahnavi – Chapter 3 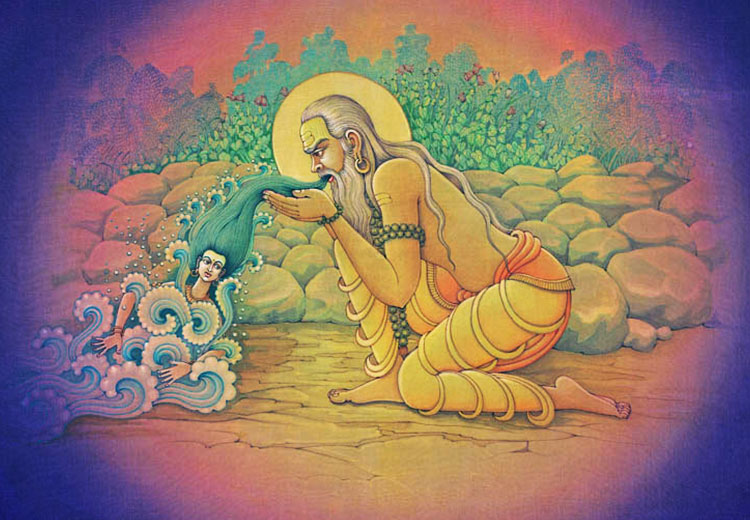 Bhagirath was totally unaware of this whole affair. He was still moving forward

When he turned back to see if Ganga was following him, he found that Ganga was not there.

He remembered that she was behind him up until the ashram of Rishi Janu.

So he went back to Janu rishi ashram and found the rishi sitting under a tree.

Bhagirath saw the pots and pans lying all over the ground.

He knew something had happened but he didn’t know what.

He prostrated in front of the rishi and told him the whole story of his journey. Then he inquired about Ganga.

The rishi heard the story and knew of its truth by his divine sight. Janu felt pity for Bhagirath, who had worked so hard to bring Ganga to Earth. Now Ganga was trapped inside Janu’s body.

Rishi Janu consoled Bhagirath and said, “For you, Bhagirath, I will release Ganga immediately.“ and saying this he made a cut in his left thigh, and Ganga water flew out from that opening like a fountain.

Soon the body of water assumed the form of the divine maiden Ganga. Who now also wanted to thank the rishi.

She said, “I was pure because I was born from the pure Vishnu energy in Lord Brahma’s kamandal. l was further purified by staying on Lord Shiva‘s head.

Now I am again purified and energised by your energy, Rishi Janu which you earned by leading an austere life.

My purifying power has increased and from now on I will be known as your daughter Jahnavi after your name.

I ask that you please bless Bhagirath to successfully fulfill  his mission and liberate the souls of his ancestors from the curse of Rishi Kapil.”

Rishi Janu blessed both Ganga and Bhagirath to be able to reach their desired goal without any more obstacles in the future.Soon after leaving Rishi Janu’s ashram.

Ganga and Bhagirath came down to the plains of north India and made their way toward Sage Kapil’s ashram.

Wherever Ganga went and through whichever area she flowed, people came in large numbers and the places became filled with a spiritual atmosphere.

The people bathed, offered oblations to their ancestors, chanted mantras and enjoyed the presence of Ganga.