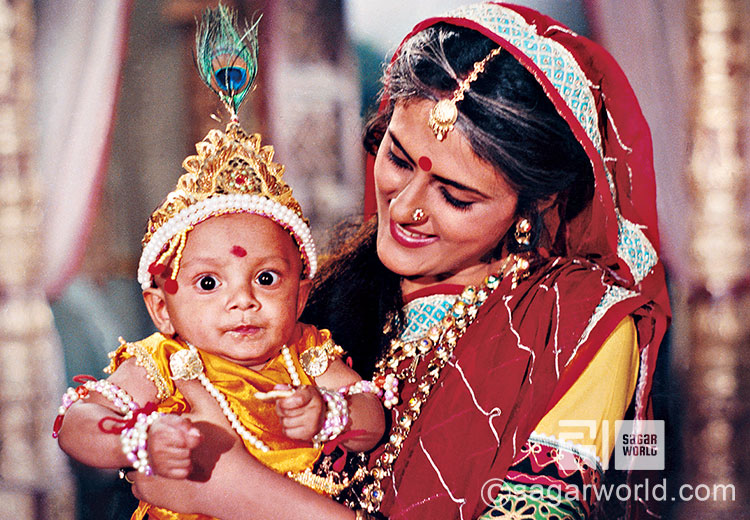 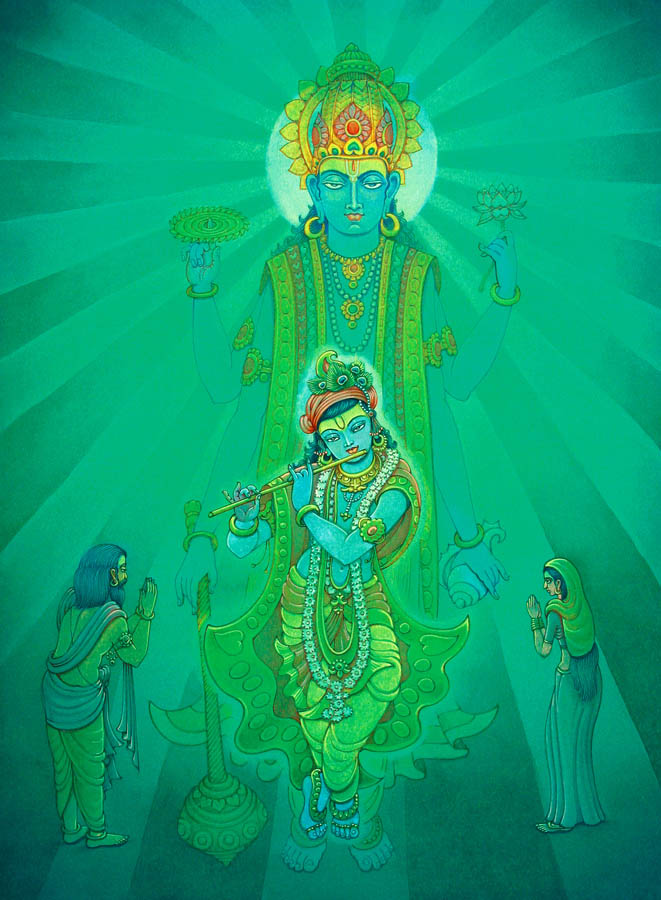 Yashoda was the wife of Gokul resident Nandrai. Nandbaba and Yashoda had no children and so always remained disturbed. But they remembered the boon given to them by Lord Vishnu in their previous life.

Dron and Dhara, both were great devotees of God and wished that they can nurture God as their own child. With this wish only, they observed devout austerity.

Pleased with their devotion, Lord manifested and blessed them with a boon that in the Dwapar Yuga (there are four Yugas first Satya Yuga, second Treta Yuga, third Dwapar Yuga and fourth Kali Yuga).

when Lord Vishnu himself will be incarnated as Shri Krishna, he will fulfill their desire. In the Dwapar age, Dron and Dhara were born as Nand and Yashoda.

In the Dwapar age, Mathura’s oppressor King Kans imprisoned his sister Devaki and her husband Vasudev.

Overnight Vasudev transported Shri Krishna to his friend Nandrai’s house in Gokul and picked up Yogmaya who was born to Yashoda as a daughter and returned to the Mathura prison cell.Kans, thinking her to be the eighth child of Devaki, wanted to kill her but she freed herself from Kans’s hands and fled away in the sky.

Shri Krishna grew up in Nand and Yashoda’s house. Yashoda nurtured Krishna with great love and care. The boon given by Lord in the previous life was bearing fruit. Yashoda was blessed to serve “God” as a mother on the earth.

On seeing the acts of Krishna as a child, Yashoda used to get very emotional.

When naughty Krishna used to break the earthen pots of the Gopis (Cowherdesses) or used to steal butter, the Gopis used to complain to Yashoda about it.

Many a times Yashoda enjoyed the pranks of Krishna and sometimes would punish Krishna and tie him up with a mortar.

There were many miraculous events that Krishna enacted in his “Leela” (play) on earth but because of Yogmaya (the Goddess of maya/ illusion), Yashoda was each time made to forget the fact that her child was actually God incarnate.

Once while playing, Krishna ate some mud. Yashoda was furious and demanded Bal (baby) Krishna to show her his mouth as Krishna was denying his act.

Shri Krishna opened his mouth and showed the whole Universe in his mouth to Yashoda. Yashoda lost herself for a moment but by the grace of Yogmaya came back to her senses.

She did not even realize that she was raising God incarnate in the form of Krishna. Similarly, when Krishna jumped into Yamuna River to break the ego of KaliyaNag (snake), Yashoda was very much worried but after some time when Krishna came out of the water, sitting on Kaliya’s hood playing the flute, then Yashoda felt relaxed.

There are many similar stories which praise the affection and love of Yashoda for Krishna.

The great Hindi poet Surdas has created great literature on Krishna-Yashoda love. The greatest devotees of Krishna regard Yashoda as very blessed for though she was not the biological mother of Shri Krishna, she had the good fortune of nurturing Krishna, as a toddler, an infant, a teenager and a boy.

The famous lines “Maiya mori mai nahi makhan khayo” (dear mother, I did not eat the butter) are ingrained in the mindsets of most Indians.

The visual depictions of Yashoda running after baby Krishna with a stick are the most popular images of Lord Krishna, evoking great faith and devotion