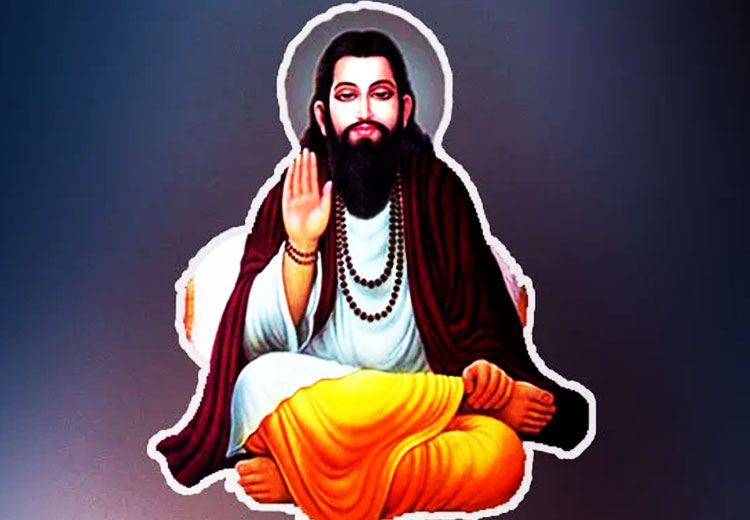 The creator of the famous bhajan “Prabhu ji tum chandan hum pani, jaki ang-ang baas samani” sung in every house as prayer to Bhagwan, Shri Raidas is one of the greatest saints of Indian bhakti movement. The original name of Raidas was Ravidas, which, because of people’s pronunciation became Raidas. Raydas, Rudradas, Ruidas, Rohidas,etc are his different names which, in different regions and different languages people call him according to their convenience.

There are many different beliefs regarding Raidas’s birth place and birth time but the most evident and famous belief is that he was born around Vikram Samvat, 1456. Few people believe his birth to be around Samvat 1500.

As far as birth place and birth day is concerned, the most accepted fact by the great scholars is that Raidas was born on Sunday, full moon day of Magh month in the Mahuadeeh area of Kashi in the shoemakers’ colony.

His father’s name was Raghu and mother’s name was Dhurbaniya or Karma. His father was a shoemaker by birth and used to make shoes. That is why, in his childhood, Riadas learnt shoemaking in the name of education. When he grew up, Raidas also did the ancestral job of shoemaking but for him it is said that he never killed animals to make shoes but he used to buy skin of dead animals and make shoes out of it. It is also said that he used to give away shoes to saints for free.

It is said that Shri Raidas was of such saintly nature that he used to donate everything that he earned. His father always remained troubled due to this behavior of Raidas. Thinking that marriage will make him responsible, his father got Raidas married to a girl named Lona. But there was no change in Raidas’s nature. In the end, troubled with his nature, his father asked him to leave the house so that he will realize his responsibility towards his wife. But by the grace of God, even his wife was a devotee like him. She also became like Raidas in nature. Both of them built a small hut behind his father’s house and started living there. He used to make shoes in his hut while singing bhajans.

It is said that seeing his financial condition, Lord sympathized towards him and to help him, came in the disguise of a saint and gave him Paras stone (philosopher’s stone which is believed to convert a base metal in to gold by mere touch). Raidas told the saint, “If you want to give it to me, pierce it in the ceiling, my hands are dirty, after I finish making the shoe, I will wash my hands and take it.” After some time, the saint came back but he saw that Raidas’s financial condition had not improved. When he asked Raidas about the Paras stone he said, “It is lying on the ceiling itself. I am happy with what god has given me; you may give it to someone else.”

Shri Raidas was a saint who had no materialistic desires but the only craving he had was devotion. He was consecrated by the greatest saint of those times Swami Ramanand. He was totally dedicated to his guru (teacher). He was very happy to get the blessings of his guru.

Impressed with the saintly life of Raidas, people started coming to him for the divine knowledge. His fame spread at faraway places. Few of the religious teachers opposed him because of his caste but his magnanimity was so much that his fame went on increasing. Impressed with his fame, Queen of Chittor, Zhalirani became his follower. Meerabai had also accepted him as her guru. In the last stage of life, he had gone to Chittor at the invitation of Zhalirani where he received great respect. It is said that in order to welcome him, Shri Kumbhanshyam temple and the lake were built. There is parasol of Raidas made at that place wherein his footmarks are imprinted.

In his lifetime, Raidas travelled a lot; sometimes at the invitation of devotee and sometimes with a wish to visit a pilgrimage site. It is said that he had gone on a pilgrimage to Mathura, Vrindavan and in the South from Tirupati to Multan and invoked a feeling of devotion in the people. Whichever place he visited, at most of the place’s devotees have built ashram, lakes and temples in his name.

There is a difference of opinion regarding the date of Raidas’s salvation; most of the people believe the day of his death to be around Samvat 1584. Few people say it to be 1597 whereas in “Meera Smriti Granth”, the year of his death is said to be 1576. As for the death place, some say believe it to be Chittor but nothing can be determined. The day of his death as per Ravidasi sect and devotees is believed to be the fourth day of Chaitra month.

Sant Raidas who had reached out to the public in a simple and straightforward language and showed a new direction to the society was an important link in the saint lineage. He always gave his word for the oppressed, neglected and weak people of the society and with his social behavior always proved that one does not become lower by just being born in a lower caste. The only testimony of a person being high or low is his karma.

His saintly thoughts had such a great impact on Kabir that once he had said, “Raidas is the saint of saints.” In his book Bhaktmaal, Nabhadas has said praising Raidas that, “Raidas’s speech is so pure and attractive that it clears all the doubts.”

Raidas knew very well how to keep the traditions secured and how to make a way in different situations. It was this specialty of him that made him famous as a great thinker, judge and social reformer of not only his times but forever.

The collection of the creations of Raidas “Sant Raidas ki Bani” has a compilation of 87 padas and three sakhiyan. There are 40 padas and one shloka in Guru-granth sahib in the name of Ravidas.

There are lacs of his followers in Gujarat, Bihar and other regions and call themselves Raidasi. His sect is known as “Raidasi Sampraday” or “Ravidasi Sampraday”.