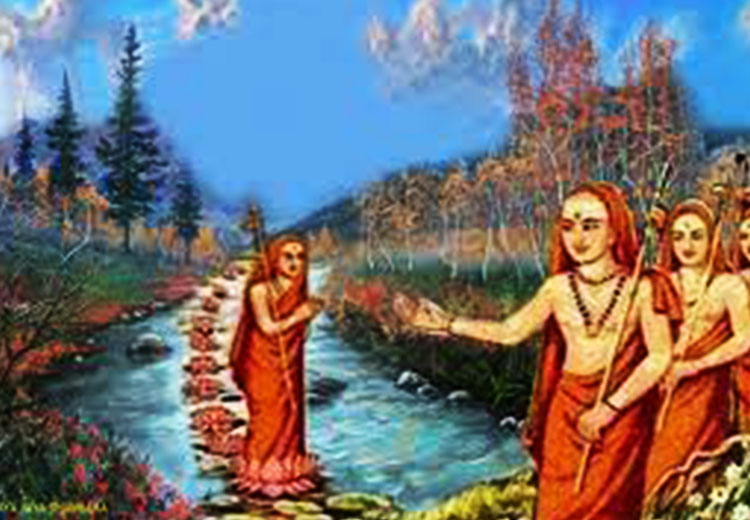 Shri Padmapaad was the first disciple of Shri Aadi Shankaracharya. Formerly, his name was Sanandan. He was a resident of Chola State and was a Rigvedi Brahmin of Kashyap Gotra.

Shri Sanandan was dedicated to his guru. Once he started serving his guru, he never left his guru’s company. The biggest example of his dedication for his guru was that once he went to the other side of river Ganga to pluck flowers for the pooja of his guru. Just then, not seeing Sanandan around, Shri Shankar got worried as to where had he gone and called out for him loudly. Thinking, his guru must be calling him for some work and he does not have to wait for Sananand for long, Shri Padmapaad who was plucking flowers, instead of going over the bridge, he jumped in to the river and without worrying about the fact that what would happen with the strong current of river Ganga, he started crossing over the river. But the immense dedication that he had for his guru had such a great impact that, where he was to drown in the waters of river Ganga, instead, wherever he stepped, a lotus flower grew out at that place and he flew like wind over the waters of the ganga and reached at the foot of Shri Shankar and apologized to him that he went to pluck flowers fro pooja without informing him.

Shri Shankar was pleased with his dedication for his guru and as lotus flower grew wherever he stepped, he named him “Padmapaad”. Since that day, Shri Sanandan became famous as Padmapaad.

One of the greatest examples of Shri Padmapaad’s dedication towards his guru is when once a tantrik named Ugrabhairav, came to Shri Shankar in the disguise of a Brahmin with the intention to kill him and told him that he needed Shri Shankar’s head for offering it as a sacrifice to Lord Shiva. Shri Shankar agreed in the name of Lord Shiva and told him that he would come at midnight and give away his head to Shiva. As per his promise, Shri Shankar went to the tantric and sat in contemplation. Ugrabhairav was pleased and removed his sword and just as he was going to behead Shri Shankar, Shri Padmapaad got an intuition that his teacher Shri Shankar was in danger. He ran with the speed of wind and while running, in the fit of anger, his body got converted in to that of a lion and within a blink of an eye, he reached to the tantric and attacked him. The tantric could not save himself from Padampaad in the form of a lion and died. This way, Shri Padampaad succeeded in saving Shri Shankar from the tantrik.

Shri Padmapaad was not only a great devotee; he was a great ascetic and a thinker. It is believed that with the help of his meditating power he was successful in saving Shri Shankar and transforming himself into the body of a lion. Few people also say that he was a great devotee of Lord Narsimha and when he ran in a fit of anger to save Shri Shankar, to help his devotee, Lord Narsimha had taken the avatar of Padmapaad.

Shri Padmapaad has written a book named “Panch-Padika” wherein he had presented Advait (non duality) so dignified, that out of jealousy, people destroyed the book by burning it. But with the beneficence of Shri Shankaracharya, he was successful in writing the book again because Shri Shankar could recollect everything that he heard and Shri Padmapaad had read his creation to him.

Some of the scholars are of the opinion Shri Padmapadaacharya has written one more book named “Vigyan-deepika” which is secured in the Nepal state library. Based on this book, Dr. Umesh Mishra has written an article named “Annihilation of Karma” which was read at the seventh year of the meet named “Oriental Conference”.

After his tour all over India, when Shri Shankaracharya established four maths (a monastery) in all four directions for the protection of Vedic religion, he appointed Shri Padmapaad as the principal of Govardhan Math (Puri Math) in the east.  This way, Padmapadaacharya was the first mathadishwar of Purishth Govardhan Math.

He was such a great guru bhakt and administrator who devoted all his life in the service of Vedic religion. Till the last breath, he saw to it that everyone follows vedic religion and conduct accordingly.

Shri Padmapaad was a great carrier of the flag of Advaits. Shri Padmapaad tried all his life for the progress of the math that Shri Shankaracharya had established.