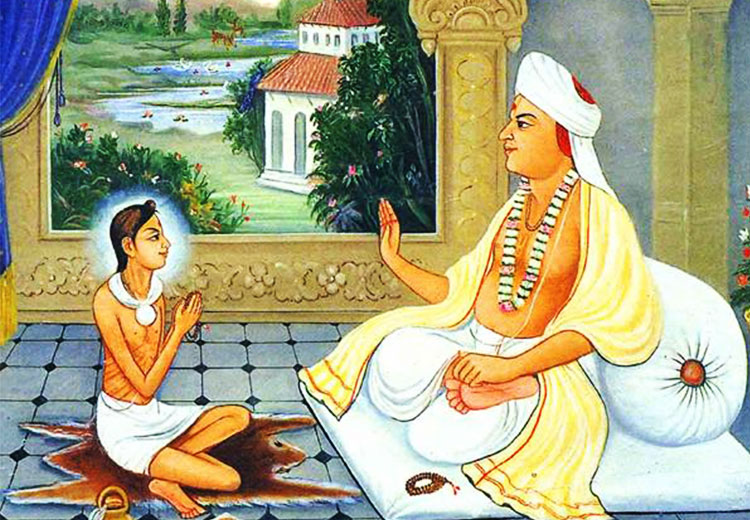 Around the 13th century when whole of India was distressed with the attacks by Muslims and there was continuous assault on the Hindu faith, Shri Ramanand was the first great saint to campaign devotion in North India. He was born in Allahabad in Uttar Pradesh but his ancestors were noble Brahmin of South India. Since childhood he was super intelligent and at a very young age, he had learnt all Vedas and Shastras. His guru’s name was Raghavanand who was one of the chief saints of Shri Vaishnav sect of those times. Once, he went to South India for pilgrimage. After visiting all the pilgrimages, when he was returned, Shri Raghavanand’s followers refused to accept him in their society because they thought that as Shri Ramanand went on a long tour, he must not have observed the Vaishnava rules of food and pilgrimage.

Being rejected by the people of his sect, Ramanand was very much hurt. This incident shook him up and after this, he established such a sect that did not believe in such casteism and orthodox traditions. He said that no one should ask each other about caste and also whom was he sitting next to eat food as any human being who surrenders himself to God are all the same. It was because of this thinking that he accepted people from all castes as his disciples. This was a strong revolutionary step in those days that showed a new direction to the low caste people where they felt accepted and honored.

Impressed with the knowledge and divine intelligence of Shri Ramanand, slowly and gradually the number of his followers increased and his sect came to be known as Ramayat Sampraday or Ramanandi Sampraday alternatively also known Viragi. It is said that the founder of this sect is Jagatjanani (universal mother) Sitaji. That is why this sect is also known as Shri Sampraday. The main mantra of this sect is known as Ramtarak. The guru tells this mantra in to the ears of his disciple. To live totally in bhajan is the style of this sect.

Impressed with Shri Ramanand, people of all sects and all castes became his disciple. Of all the disciples, twelve were his favourite which included Kabir, Peepa, Raidas who are worth quoting. Hindu, Muslim, Jain, Buddhist, Parsis, his disciples came from various religions. In addition to all the areas of India saints from countries like Iran and Arab used to come to serve him and fulfill their desire. There was no need of changing the sect to be his disciple; it was only on the basis of desire for devotion he used to gratify his disciple. He believed that all the directions are filled with God and anyone and anywhere can find God.

Shri Ramanand has contributed at large towards the protection of Sanatan Dharma. People following Sanatan Dharma had tough time at that time. India’s condition was also going to be like that of Afghanistan and Iran that were forced to become Muslim at the sword point. Similarly, the Indian Muslim rulers were also planning to do this to people in India. The Muslim ruler of that time, Tughlaq asked his maulavi as to how to behave with the Kafirs (Hindus). The Maulavi told him that Hindus have no right to live post which Tughlaq got houses of Hindus robbed and took away all their properties but it was Shri Ramanand’s divine power that he fulfilled whole of Sanatan society with food and money and in spite of continuous efforts of Tughlaq, the Hindu society never bent to the torture of the King. In the end, there came a situation where the King had to send his messenger to Shri Ramanand and apologize and for the protection of Hindu religion, wrote a treaty letter accepting twelve conditions.

Shri Ramanand lived on the Panch-ghat in Kashi and always remained drowned in devotion. It is believed that he used to get out of his cottage only at dawn. It is said that Kabir knew about this and so one night he slept on the steps of the ghat waiting for Shri Ramanand. By mistake, Shri Ramanand stepped on to Shri Kabir as it was dark and words came out from his mouth, “Ram-Ram” which Kabir accepted as Gurumantra. Later, seeing the self-knowledge of Kabir, Shri Ramanand accepted him as his disciple. It is said that when Swami Ramanand went for “Digvijay-yatra”(the world conquest), Kabir also accompanied him.

According to Dr. Grierson, Shri Ramanand was born in 1299 AD and he died in 1410 AD. Accordingly, he lived a life of 111 years. But this cannot be relied on totally.Few people believe his birth year to be 1366 CE whereas others believe it to be around 1400 and his death to be around 1470.  Whatever the real time may be, our Saints are known not for their birth time or period but for their work and Shri Ramanand was one of those greatest men who had not only transmitted the feeling of love and social harmony but also immensely contributed towards Sanatan dharma and culture. No one can forget his role in the awakening of Vedic religion in North India.